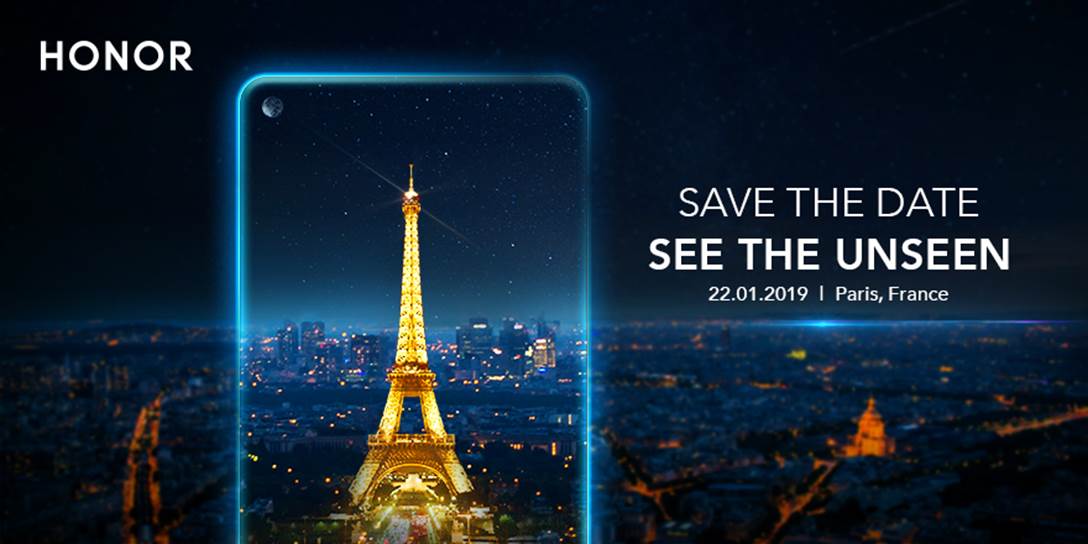 Honor has reached out to us to confirm that it will host an event in Paris on January 22. As part of its e-mail, the company said that this is its “Global Product Launch”, and the upcoming device will be fueled by Huawei’s flagship processor, the Kirin 980. As most of you probably already know, this processor is included in Huawei’s flagship Mate 20 lineup of devices, and it is a 7nm 64-bit octa-core processor which comes with a dual NPU on the inside. On top of everything, the company has confirmed that this phone will feature a display camera hole, as you can see in the provided image. The phone’s front-facing camera will be included in the upper-left portion of the display, while the display itself will feature rounded corners. The official tagline for this event is “See The Unseen”, and even though the company did not reveal what phone is this, it’s quite probably the Honor View 20, and it will be the very first Honor-branded phone to sport a display camera hole.

Background: The company’s executive had recently confirmed that the Honor 11 and Honor View 20 will be launching next year, and the View 20 part of that announcement managed to surprise some people, as the Honor View 10 launched in late 2017. In any case, the Honor Magic 2 was announced not long ago, and it seems like that managed to force Honor to reshuffle things a bit, and delay the announcement of the Honor View 20 a bit, but not by a lot, the phone will arrive a month later than anticipated it seems. The Honor View 20 is the logical conclusion based on the info the company shared, as the Honor View 10 was fueled by Huawei’s flagship SoC at the time, and the timeframe also fits. The Honor 11 will also ship with the Kirin 980, but that device will not launch until mid-2019, most probably, as the Honor 10 arrived in May this year. Aside from the Kirin 980, the Honor View 20 is expected to include a rather large display, a larger panel than its predecessor sported (6-inch one), so a 6.2 or a 6.3-inch display will probably be included. The company will probably include 6GB of RAM in the phone, while Android 9 Pie will come pre-installed on the device, along with Huawei’s Emotion UI (EMUI) 9.0 skin.

Impact: No matter if this ends up being the Honor View 20 or not, it will become the most powerful smartphone Honor ever announced, and it will remain the most powerful one until the Honor 11 arrives, as the two will be quite similar in terms of specs and features. The Honor View 10 will probably sport a really thin “chin” below the display, and its bezels will be non-existent except for that. A rear-facing fingerprint scanner will also be included, most probably, unless Honor opts to include an in-display fingerprint scanner here. In any case, the Honor View 20 will be considerably more affordable than the Huawei Mate 20, Mate 20 Pro, and PORSCHE DESIGN Mate 20 handsets, as was the case with its predecessor and the Mate 10 lineup.