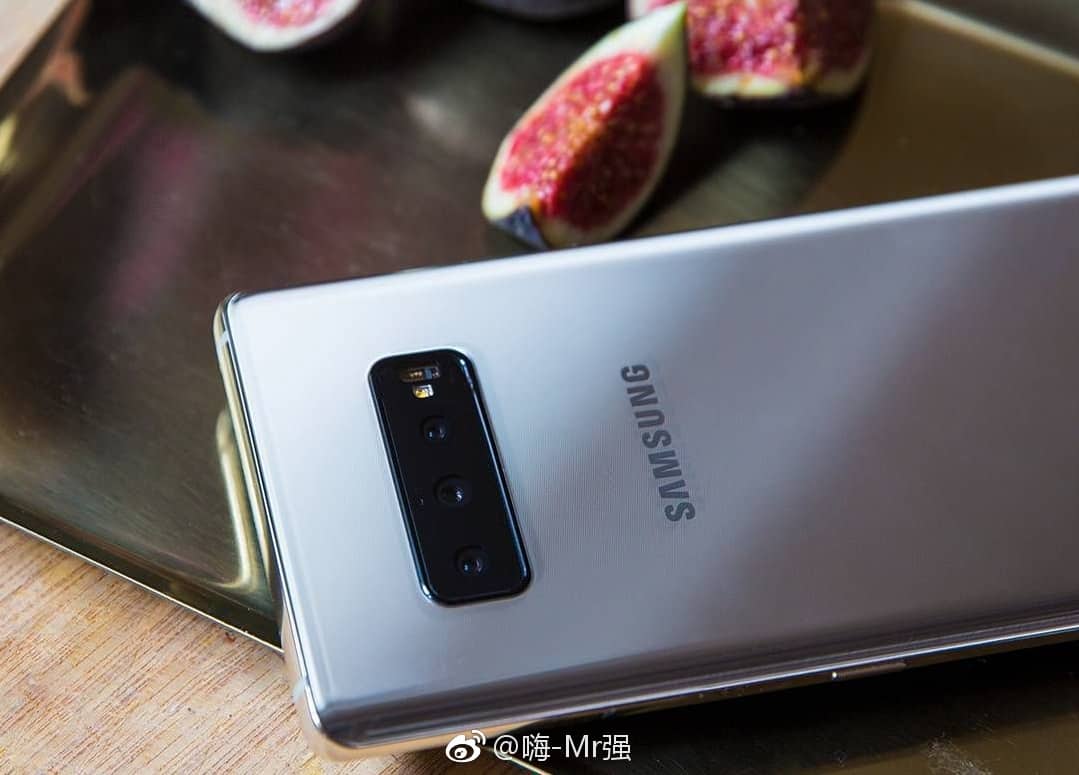 The Samsung Galaxy S10 and Galaxy S10+ have just surfaced yet again, and this time around, all the focus is on the back side of these two smartphones, and we get to see both renders and real-life images. One of the two leaks says that the regular Galaxy S10 variant will sport two cameras on the back, half as much as the rumored "premium" edition of the device, and one less than the Galaxy S10+. If there is any truth to this, Samsung will actually release three Galaxy S10-branded smartphones all of which will have a different number of cameras on the back, which may seem a bit far-fetched, but that's what leaks and rumors have been reporting for a while now. In any case, If you take a look at the gallery down below, you will be able to see that the cameras on both the Galaxy S10 and Galaxy S10+ are horizontally-aligned, and that an LED flash and a heart-rate sensor are placed right next to those cameras. Both of these phones will be made out of metal and glass, which is something that the leaked images confirm, while both devices will also sport a dedicated Bixby button on the left, which will be placed right below the volume rocker. A power / lock button will be included on the right, while the phone's rear-facing cameras will protrude a bit along with the LED flash and a heart-rate sensor. Sides on the back of the Galaxy S10 and Galaxy S10+ will be curved, while Samsung's logo will sit on the back as well. One more thing you'll notice is that the fingerprint scanner is not included on the back of either of these two smartphones, that's because rumors are claiming that Samsung will utilize in-display fingerprint scanners in both of these devices, just like a number of other companies have at this point. Along with renders of the two devices, you can also see some seemingly third-party cases leaked as well.

"Premium" Galaxy S10 May Be In The Cards As Well

All the Galaxy S10 units will sport similar specs, with the "premium" Galaxy S10 differentiating the most, due to more RAM, 5G support, more cameras, and a larger display. Chances are that all Galaxy S10 units will ship with QHD+ Super AMOLED panels, though, while all of them will include Android 9 Pie and Samsung's One UI skin. All the Galaxy S10 smartphones will also ship with the same SoCs, as Samsung is expected to sell two different SoC variants once more. One variant will be fueled by the company's Exynos 9820 64-bit octa-core processor, while the other will ship with Qualcomm's Snapdragon 855 chip. The Exynos model will ship to Europe and India, while the Snapdragon unit will be available in the US and China. We are only guessing at this point, but judging what the company did in the past, that's exactly what will happen. All the Galaxy S10 units will include wireless charging, and it's quite possible that all of them will ship with in-display fingerprint scanners as well.

What About The Galaxy S10 Lite?

The Galaxy S10 Lite aka "budget" Galaxy S10 unit has been mentioned in a rumor or two as well, and if there's any truth there, Samsung will actually release a tiny Galaxy S10 model with 4GB of RAM on the inside. The thing is, this will not exactly be a mid-range phone, at least not according to rumors, as it will ship with the Exynos 9820 / Snapdragon 855, and will share most of the specs with the other Galaxy S10 units. It may be a bit unrealistic to expect Samsung will introduce four flagship Galaxy S10 units next year, but we'll see what will happen, as rumors and leaks have been out of control.