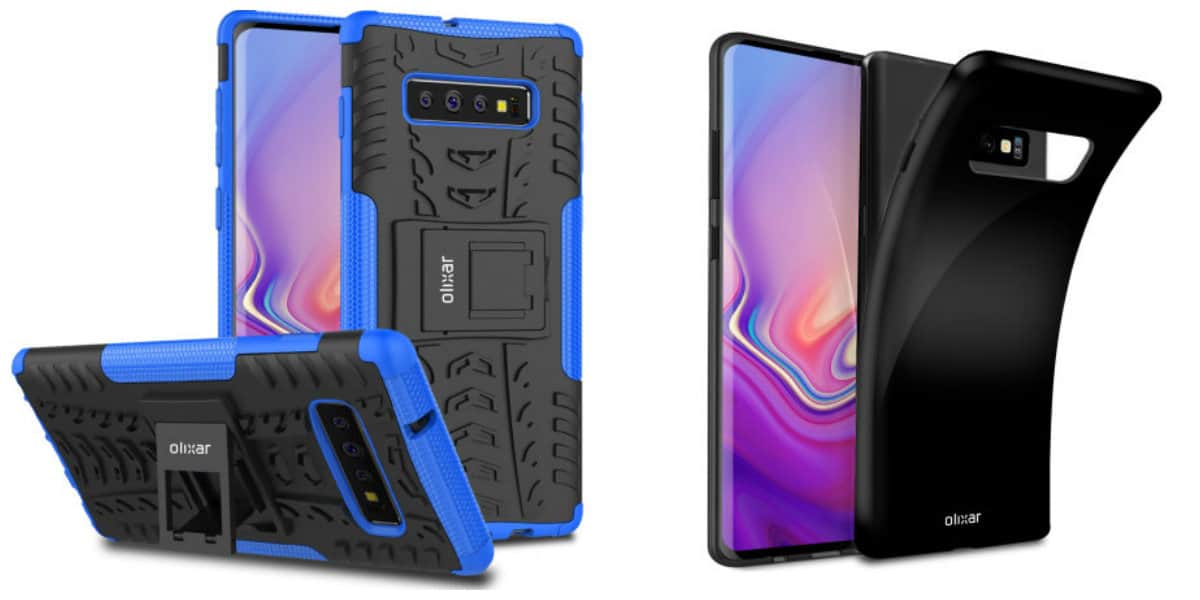 Ghostek's alleged case for the Galaxy S10+ surfaced quite recently, and now a bunch of Olixar-branded Galaxy S10 cases appeared on MobileFun.com website. There are seven cases listed there, overall, six of which are available for pre-order, while one is already in stock. Price tags are listed for all cases, along with images, of course, and as part of those case renders, we can also see the device itself. Interestingly enough, all of these cases are showing a render of the Galaxy S10 with three rear-facing cameras, which could be accurate, even though some leaks suggested that the phone will sport two rear-facing cameras, while the Galaxy S10+ is said to sport three. In any case, we've heard it both ways, so it is possible that the Galaxy S10 will pack three cameras on the back, in fact, most recent rumors and leaks seem to suggest that will happen. We'll talk more about the phone later on, let's focus on cases now.

The first two cases that you'll find listed on the site are Olixar ArmourDillo cases, black and blue ones. These two cases are both priced at $10.99, and these are rugged cases, that's for sure. The inner layer is TPU material, while the outer is compiled out of impact-resistant exoskeleton, and it comes with a built-in viewing stand on the back. Two FlexiShield Olixar cases are also listed on MobileFun, blue and black ones, and these two cost $5.49 each. Olixar's FlexiShield cases are actually quite thin, they do offer some protection, but less than ArmourDillo cases. These cases look way more elegant, though, and look more like regular silicone cases. The Olixar NovaShield case for the Galaxy S10 is also listed, in black, and is priced at $13.99. This case is also relatively thin compared to the ArmourDillo case, and it offers a similar amount of protection as FlexiShield cases.

The last case that is available for pre-order at the moment is Olixar's "Ultra-Thin" case for the Galaxy S10. This is a clear case that is available for $7.49, and it's the thinnest case out of all the ones available on MobileFun. This case comes with a non-slip coating, which should add more grip to it. The very last case that is listed on the site is the Olixar Primo case, which is a wallet / pouch-type case, and it is made out of genuine leather, while it is not made specifically for the Galaxy S10, this case fits some other phones as well. This case is quite pricey, it costs $21.49, but it is available for purchase as we speak, no pre-orders necessary. As you can see, this case opens up like a wallet, and once opened, on the left, you have a pouch for the phone, while you'll notice a number of slots to insert your cards (credit card, ID, and so on) on the right. Images of all the cases we talked about are included in the gallery down below, while you can access MobileFun's Galaxy S10 cases (in case you'd like to buy one) from the link included in the first paragraph.

If you take a look at the provided case renders, you will notice that this Galaxy S10 handset sports three cameras on the back, as mentioned in the first paragraph. The Galaxy S10+ is expected to ship with three cameras on the back as well, but the two devices will not have the same number of cameras, it seems. The Galaxy S10 is rumored to sport a single camera on the front, while the Galaxy S10+ will include two front-facing shooters. The Galaxy S10 will be made out of metal and glass, that much is quite obvious at this point, while both the front and back side of the phone will be curved on the sides. The Galaxy S10 will ship with a curved display, like its predecessor, but this phone will sport even thinner bezels than the Galaxy S9. Unlike the Galaxy S9, however, it will include a display camera hole in the top-right corner, if leaks are accurate. That camera hole is not visible in the provided renders, as that part of the phone is hidden in these renders. Anyhow, the phone's display will sport rounded corners, while the device's main cameras will be horizontally aligned, with an LED flash and heart-rate sensor located right next to them. You will notice that Samsung's logo is located on the back of this smartphone, but a fingerprint scanner is nowhere to be found, well, the Galaxy S10 will probably include an in-display fingerprint scanner.

What About The Galaxy S10's specs?

The Galaxy S10 is expected to arrive in two SoC variants, similar to the Galaxy S9. The Exynos 9820 will fuel the phone in Europe and India, while the Snapdragon 855 will be included in China, and the US. The device is rumored to include a 6.1-inch QHD+ Super AMOLED display, while chances are that it will ship with 6GB of RAM on the inside. The phone's battery is still a mystery, but the device will definitely support fast charging, and also fast wireless charging. Some leaks suggested that a 3.5mm headphone jack will be included on this phone, while others said that it will not, but you can expect to get a Type-C USB port on the bottom of the Galaxy S10, along with the phone's loudspeaker. Android 9 Pie will come pre-installed on the device, along with Samsung's One UI skin, while the regular Galaxy S10 handset probably won't support 5G, that feature may be reserved for the "premium" Galaxy S10 variant, at least if rumors are to be believed.

The "premium" Galaxy S10 variant is expected to launch later than all the other Galaxy S10 models, and if rumored info is to be believed, it will be made out of metal and ceramic. This smartphone is also rumored to include a 6.7-inch display, quite probably a QHD+ Super AMOLED panel, while 12GB of RAM was also mentioned in rumors. This phone will ship with 5G support out of the box, and if this info ends up being accurate, it will be the most expensive variant of the Galaxy S10, by far.