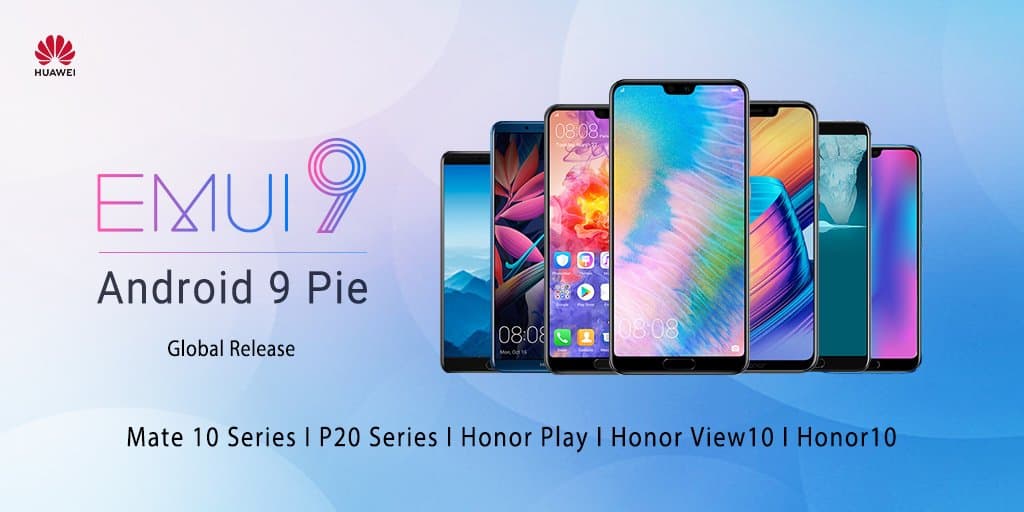 According to Huawei’s official EMUI Twitter handle, a bunch of Huawei and HONOR smartphones are getting updated as we speak. Huawei has started to roll out Android 9 Pie-based EMUI 9 update to the Huawei Mate 10, Mate 10 Pro, P20, and P20 Pro. In addition to that, HONOR, which is technically a separate company, is rolling out the update to the HONOR Play, View 10, and HONOR 10. Most of these phones will receive their updates in Europe, as they’re sold unlocked by the company in that region the most. This update has been in beta for a while now, and it seems like Huawei finally got to a point where it can share a stable build of it. Do keep in mind that this update is rolling out to unlocked units of these phones according to the report, so if your phone is carrier-branded, you’ll have to wait a bit more. If this report is accurate, Huawei actually managed to trump Samsung in this regard, as the Korea-based tech giant is still rolling out Android 9 Pie beta updates to its flagships, while Huawei’s flagships rolled out with Android 9 Pie, and more phones are just receiving the update, it seems.

Huawei’s Emotion UI (EMUI) skin is not exactly a light implementation of Android, for better or worse, it is considerably “heavier” than stock Android, which is not necessarily a bad thing, as it brings a ton of additional features to the table. The moment you fire up EMUI 9, you will notice that the design is a bit different than what you’re used to on EMUI 8, and if you didn’t use EMUI, you’ll notice that it looks considerably different than stock Android. Aside from the design, Huawei also included new gestures system in EMUI 9. So, if you enable gesture navigations, you will be able to swipe up from the bottom to head to your home screen, swipe up and pause to launch the overview menu, while swiping from either left or right sides of the display will act as a “back” button. Huawei Share, Wireless Projecting, AI E-Commerce, and other features have been added to EMUI 9, though truth be said, you’ll probably not use most of these features, even though they can come in handy in some situations. AI E-Commerce, for example, allows you to tap the image with two fingers or point the camera at the product you’re interested in, and this software should be able to find it for you online, to purchase. We’ve seen such apps in the past, and none of them worked as it should, even though it sounds great on paper. Huawei did include an AI video editor in the mix, a video editor which can identify faces and create separate video highlights for each person, which can be handy if you’re not a perfectionist and like to do everything yourself, of course. GPU Turbo 2.0 should improve the way these phones handle games, as it should boost gaming performance, while you should be able to see some battery improvements as well, as this is Android 9 Pie after all. These are only some of the changes, Huawei’s Emotion UI skin is quite capable, though if you don’t like over-the-top skins with tons of features, it may not appeal to you.

When Can I Expect This Update To Hit My Phone?

Huawei said that the update is rolling out to all devices that are listed, but it may take a while for the update to reach your smartphone, as per usual. These updates are rolling out gradually, which essentially means that you may receive it in the next five minutes, or it may take a week or two for it to arrive to your smartphone, just be patient. You can, of course, always try to locate the installation file and flash it to your device, but you will lose everything data-wise on your smartphone, and it’s not worth the hassle, it’s better to wait for the update to arrive, and let the phone do its thing, as you’ll get to keep your data, and waiting a bit won’t hurt you, at least that’s what we’d recommend you do. Same goes for both Huawei and HONOR smartphones, as in both cases Android 9 Pie is arriving, but the gradual rollout applies.

It’s time to experience #EMUI 9.0 on your favorite #HUAWEI device. If you own one of these devices, EMUI 9.0 will be with you very soon! Stay tuned.#HigherIntelligence #HUAWEIMate10 #HUAWEIMate10Pro #HUAWEIP20#HUAWEIP20Pro #HonorPlay #HonorView10 #Honor10 pic.twitter.com/UOeFVd8UPU