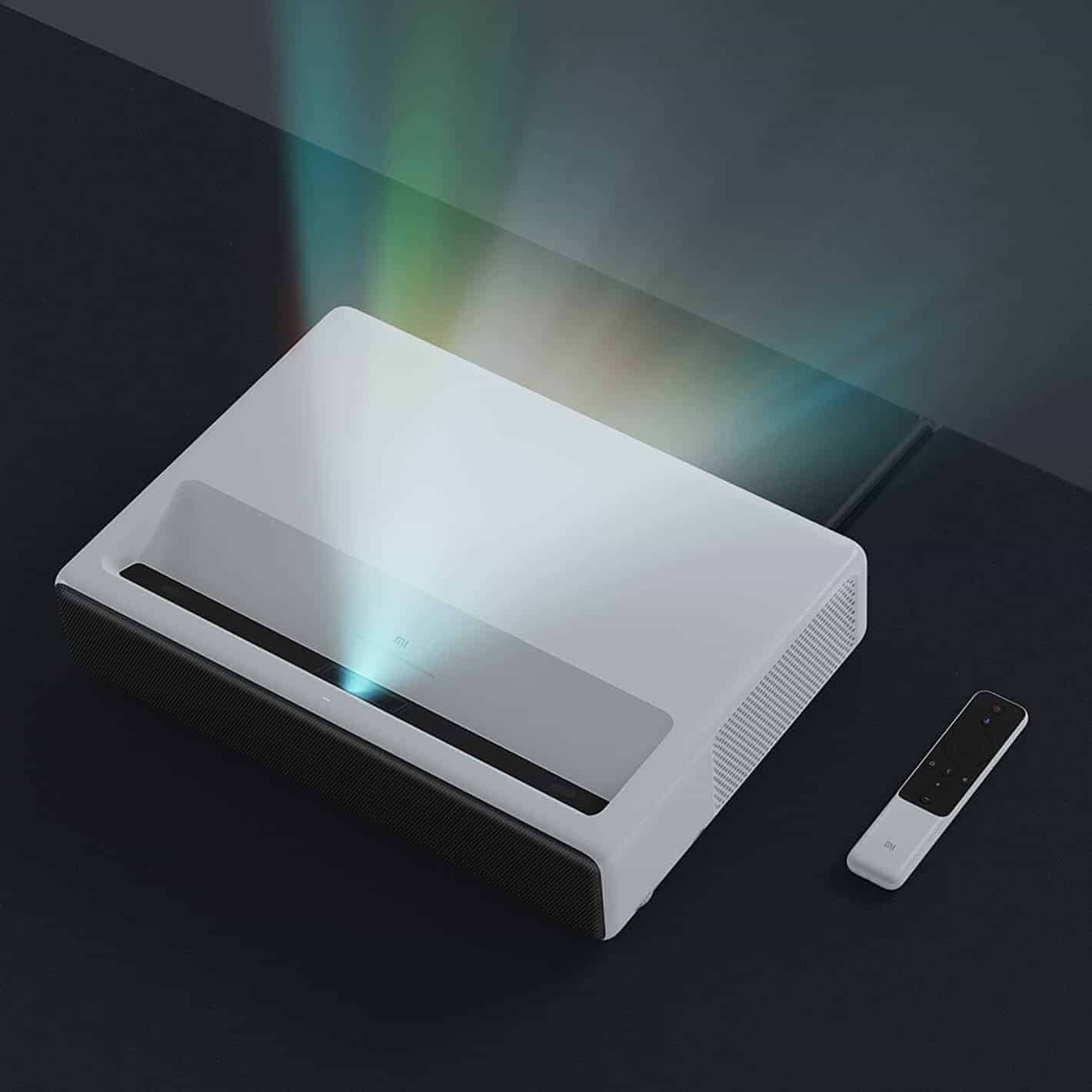 Xiaomi had an event in New York City last week, where it showed off a few different products that it was bringing to the US, and that includes a new projector that is running on Android TV. It can do a picture that is up to 150-inches, and looks quite nice. It's also pretty expensive, and available exclusively at Walmart. It's called the Mi Laser and will set you back around $1999, which is pretty odd for Xiaomi – a company who prides itself on not making more than five-percent profit on any of its hardware products. That could be to keep everyone out there from buying one, since it is their first Android TV projector.

This projector from Xiaomi is a pretty small one, and usually that means that they skimped on the built-in speakers, but that is not the case. The Mi Laser still sports Dolby Stereo Speakers, now it's not Dolby Atmos, but these speakers were tuned by Dolby so you are going to get some really good audio out of this one. The projector can project an image up to 150-inches (measured diagonally), and it'll be in up to full HD quality. Unfortunately, it's not 4K and at this price you would probably expect 4K resolution, but that's pretty tough for a projector to do, especially at this size. Xiaomi touts that there is a 25,000 hour lifespan on the Mi Laser, and that is compared to the traditional light bulbs lasting on average around 2,000 hours. Now on the software side, this is running Android TV (currently based on Android Oreo, there isn't an Android Pie build of Android TV just yet). That means you're going to have access to a ton of different apps and games on this projector. Including Netflix, Hulu, Google Play Movies & TV, VUDU, YouTube and more. Xiaomi also has Google Assistant and Chromecast built-in here, so you can cast your favorite content to this projector.

Background: Xiaomi actually showed off this projector at Mobile World Congress in Barcelona earlier this year. At the time, Xiaomi told us that it was just a hacked together (essentially) projector that was running Android TV, and it had no plans to sell it as a product. Well, it looks like those plans did indeed change. The Mi Laser was pretty impressive when we heard and saw it in Barcelona, and with all of this time to make it even better, it's likely much better now. The Mi Laser has dual speakers here, which sound really good and can likely give you a great sound experience no matter where you are sitting in relation to this projector.

This isn't the first time that Xiaomi has put together an Android TV device, and sold it in the US. It had the Mi Box that it launched in the US a couple of years ago and now the Mi Box S that launched last month. These were both very cheap 4K Android TV set-top boxes, and virtually the only set-top box that ran Android TV besides the SHIELD TV, and since these were under $100 (and closer to $50 actually), they were pretty popular. But they were also riddled with bugs, unfortunately. Many users were having all sorts of issues with their Mi Box's running on Android TV. Hopefully that will not be an issue with the Mi Laser. For the Mi Box S at $69, it's a bit more understandable to have all of these bugs, but when it comes to a projector that costs $1999, it's much less acceptable. Hopefully Xiaomi has taken the time to iron out all of those bugs before launching it at Walmart.

Impact: This isn't the first Android TV projector that has been announced, Anker actually launched one just a few weeks ago as well. It's much cheaper, but it's also a portable projector, which means lower-end hardware, to fit in that battery which lasts around four hours. Xiaomi has decided to go the route of using higher-end hardware on the Mi Laser, so that it is definitely worth the price tag, but the major issue with this one is the fact that it is only full HD resolution, or 1920×1080. And at that price, it should be 4K resolution. The Mi Laser does have a pretty interesting setup though. Instead the projector projecting from the front of the projector, it actually projects from the top of the projector and at an angle. Which gives it a pretty nice look, but it also means that when someone walks by it, the picture won't be disturbed. Which is also a good thing here. The speakers are on the back, so that they are facing you, which is a good thing as it makes the sound much more natural. On the front is where you'll find the ports. Speaking of ports, there is an Ethernet port there which can be used if you have slower WiFi or a bad signal in that room. There are also three HDMI ports, as well as a USB and a headphone jack (the second 3.5mm hack is for a microphone). Having three HDMI ports means that you can plug in something like a PlayStation 4, and game on this projector, which should be a neat experience.

The Xiaomi Mi Laser is on sale from Walmart now and it does cost $1999. For that price, you are getting the projector which also comes with a remote to control it. The Mi Laser is super simple to setup and works well in most setups because of how clean it looks. You can also set it up pretty close to the wall, in case you don't have a lot of room but still want to watch TV and such through this projector. That makes the Mi Laser ideal for smaller rooms and even smaller apartments. You can pick up the Xiaomi Mi Laser from Walmart using the link down below, it doesn't appear to be stocked in Walmart stores right now, which means you can either have it shipped to you, or shipped to your local store for pick-up.

Buy the Xiaomi Mi Laser (Walmart)
Trusted By Millions
Independent, Expert Android News You Can Trust, Since 2010
Publishing More Android Than Anyone Else
35
Today
96
This Week
588
This Month
3100
This Year
104579
All Time
Advertisement