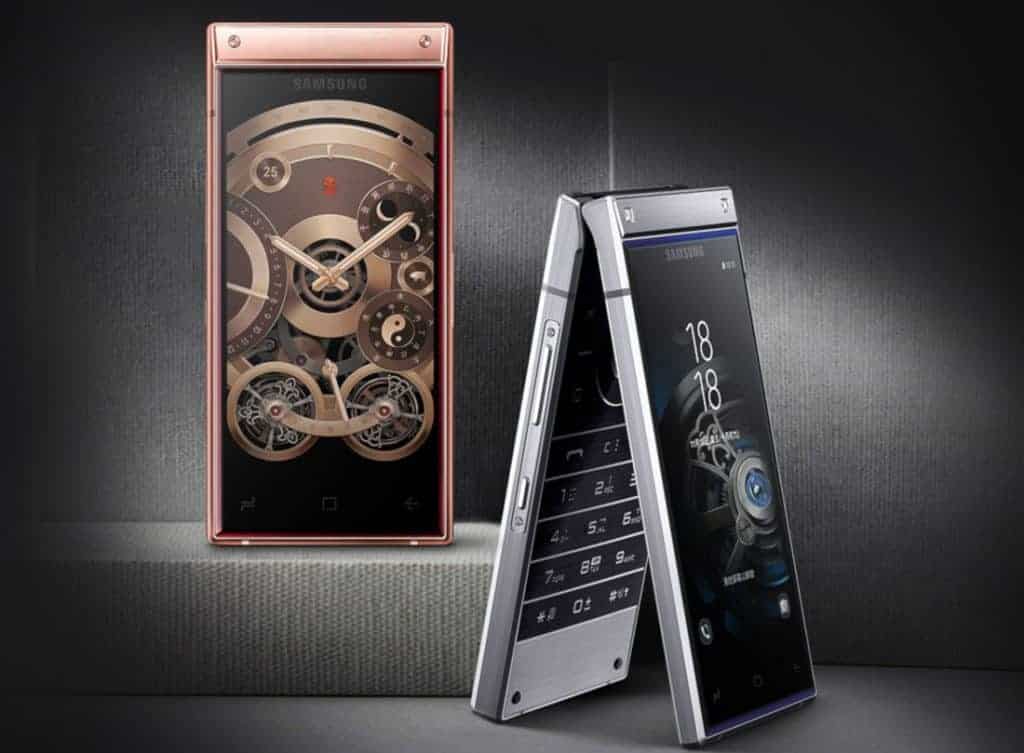 After months of rumors, leaks, and teasers, Samsung has finally announced its new flip phone smartphone, the W2019, and the device got announced in China. It can be said that this is also the company’s flagship smartphone, at least its flip phone flagship. This handset is made out of metal and glass, while it comes with two displays, one on the outside, and one on the inside. The phone has a boxy shape, while its physical keys are located on the left, the power / lock, volume up, and volume down buttons. The phone’s displays are the same on the inside and outside, and we’ll talk about them in a second, while it’s also worth saying that when opened, the device offers a number of physical keys, though you’re not getting a full physical QWERTY keyboard here, but your regular numpad, with navigation keys, and some additional buttons that you can take advantage of. Two cameras are included on the back of this phone, along with an LED flash, while the W2019 also comes with a fingerprint scanner, and in the case of this phone, the fingerprint scanner is located on the right. A 3.5mm headphone jack is not a part of the package, but the device does sport Bluetooth 4.2 LE, and a USB Type-C on the bottom.

You will find one 4.2-inch fullHD (1920 x 1080) Super AMOLED display on the inside of this phone, while that very same display is used on the outside of the device as well. Both of these displays are touch-sensitive, in case you were wondering. Qualcomm’s Snapdragon 845 64-bit octa-core processor fuels the Samsung W2019, while the device comes with 6GB of RAM and 128GB / 256GB of expandable storage (expandable up to 512GB via a microSD card). Android 8.0 Oreo comes pre-installed on the device, with Samsung’s custom UI which is adapted for this smartphone. The Samsung W2019 has two SIM card slots, we’re looking at a hybrid dual SIM setup here (2x nano SIM cards), which means that you can use the second SIM card slots in order to insert a microSD card, and by doing that, expand the phone’s storage. Two 12-megapixel cameras are included on the back of this phone, the main sensor offers f/1.5 – f/2.4 variable aperture and OIS, while the secondary one has a fixed aperture of f/2.4, and this is probably a telephoto lens. An 8-megapixel selfie camera is also included on this phone, and it has an f/2.0 aperture lens. A 3,070mAh battery comes included in this package, while the device measures 132.9 x 63.4 x 17.3mm, and weighs 257 grams.

The Samsung W2019 got announced in China, as already mentioned, and chances are it will not become available in any other country, at least if the Samsung W2018 product placement is anything to go by. That’s not exactly surprising as there’s high demand for such phones in China, but that’s not the case in the vast majority of other markets, if not all of them. That being said, the Samsung W2019 comes in Rose Gold and Platinum color variants, while the phone’s base version with 128GB of storage is priced at 18,999 Yuan ($2,729) in China, we still do not have a price point for the 256GB storage model.

Background: Samsung has been releasing one W series smartphone per year for years now, last year it was the W2018, while the year before the company introduced the W2017. Both of those devices were released in China only, which is why it seems that the Samsung W2019 will stay exclusive to China as well. The name of the smartphone basically stands for the year it was released in. It is important not to mistake the Samsung W2019 with the company’s upcoming foldable smartphone, as those two devices could not be more different, the Samsung W2019 is your regular flip phone smartphone, while the Galaxy F smartphone (rumored name), will actually have a display that will be foldable. The company had already demoed that technology at its Developers Conference last week, and the company had confirmed a while back that its foldable smartphone will become available in 2019, but we still do not know when exactly. The Samsung W2019 and Galaxy F are expected to have a similar price tag, though, as the Galaxy F is also rumored to cost around $2,000, while its availability will most likely be limited as well, but not to the extent of the Samsung W2019.

Impact: The Samsung W2019 is quite probably the best flip phone smartphone you can get out there at the moment, if you’re interested in such a phone, but if you live outside of China, that will present a serious problem. This smartphone’s availability is limited for a reason, the vast majority of people are not interesting in flip phone smartphones, as there are a number of tradeoffs to consider. You’re getting a considerably smaller display than on a regular phone, so content consumption is limited. Thanks to such a small display, typing using an on-screen keyboard is not as easy as on a number of other phones, and using the phone’s numpad to type messages takes forever. The phone is considerably thicker than most other flagship phones out there, in fact, it’s 2x thicker than most other regular flagship smartphones that are available out there these days. The device is, however, considerably shorter, and narrower than most regular smartphones, and it will definitely make you get noticed if you use it in public, as very few people still use flip phone smartphones, at least outside of China. It remains to be seen if Samsung will opt to release this phone in more markets down the road, but chances are we will not see that happen, even though some people outside of China may still be interested in flip phone smartphones. Truth be said, if this phone gets released outside of China, its price tag will probably be even higher than it is in China, and that makes it cost twice as much as the Galaxy Note9, for example.