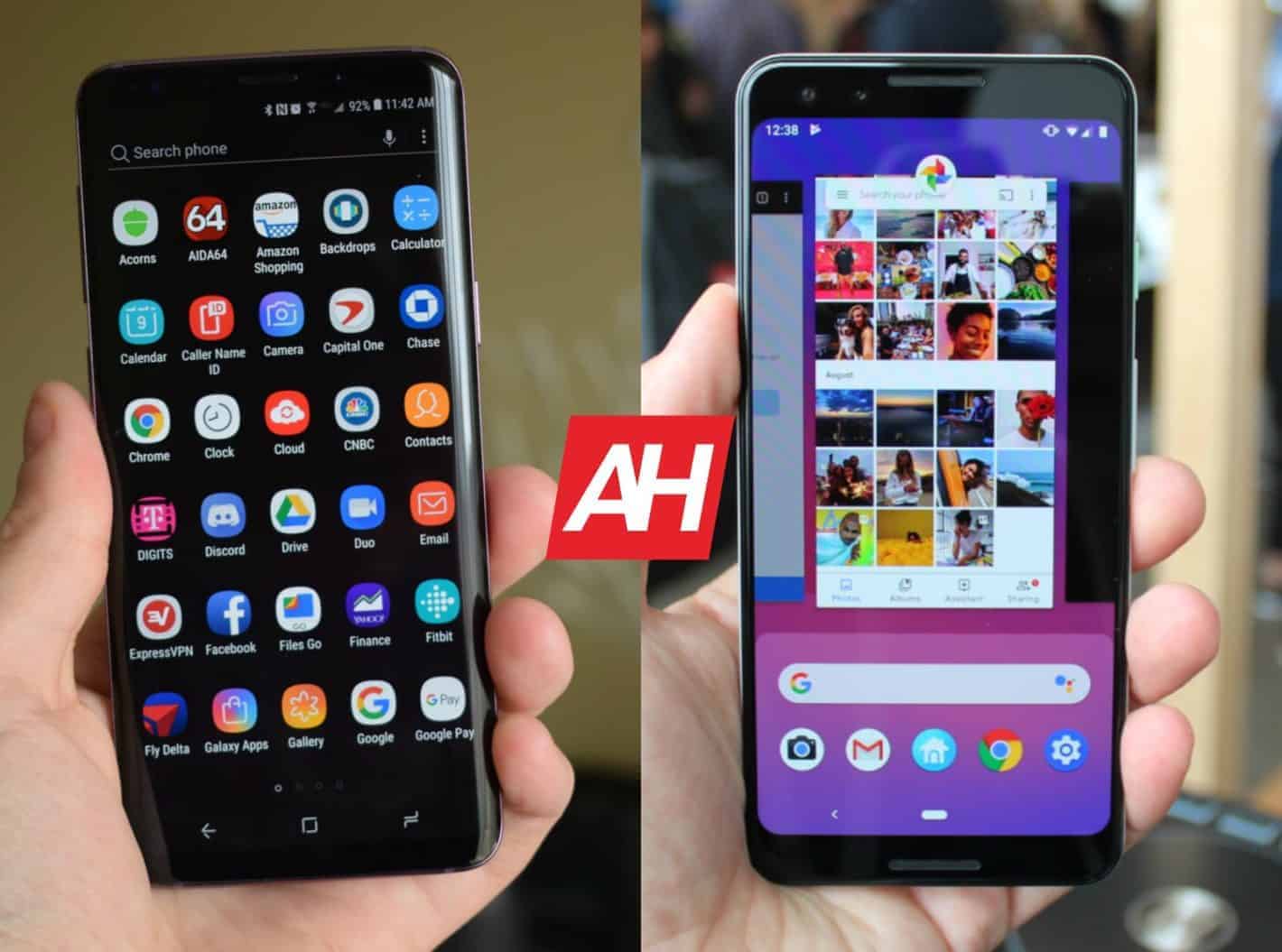 Do we have a good one for you today – the new Google Pixel 3 takes on the Samsung Galaxy S9. When it comes to looks, the Infinity Display on the Samsung Galaxy S9 with its dual-curved display and near-bezel-less look will take a bow in front of the still rather old-looking Pixel 3. Arguably, the looks of both devices have been one of the aspects most critically discussed by the tech community which is probably due to the increased competition and the higher asking prices for these two phones. Both use an OLED display, although the Galaxy S9 uses a QHD+ resolution display while the Pixel 3 is resigned to an FHD+ resolution. They both also use the same technology inside with a Snapdragon 845 and an Adreno 630 GPU. The Galaxy S9 has a few extra bells and whistles, expandable memory, and Intelligent Scanning.

These two devices are different in several ways, but also represent the lower end of their respective flagship product lines, compared to the Galaxy S9+ and the Pixel 3 XL. The displays are almost identical in size, they both use OLED technology, both are HDR10 compliant, both uses an Always on Display (AoD), and Gorilla Glass 5. They both use the same Snapdragon 845 processor and Adreno 630 GPU, the same amount of 4GB of RAM and 64GB of base internal storage (expandable in the Galaxy S9 but not in the Pixel 3). When it comes to the camera area, both use a 12.2-megapixel main camera although the Galaxy S9 offers an adaptive aperture. The Galaxy S9 features an 8-megapixel front-facing camera (FFC), while the Pixel 3 features two of them. The non-removable batteries are close in terms of capacity, both offers fast charging, and both offer quick wireless charging. Even their physical size is close to the same size, although the Galaxy S9 does weigh in at 15 grams more. They both have the usual suspects – NFC, Bluetooth v5.0, and a USB Type-C port. They both provide access to Google Pay, are IP68 certified, feature stereo speakers, a Gorilla Glass 5 build, a rear-mounted fingerprint sensor and voice assistant technologies – Bixby and Google Assistant, respectively.

Please take a careful look at the detailed specifications comparison chart below and here you will see just how these two high-end Android smartphones stack up against each other. Which one is the better purchase by offering the most technology for the least amount of money? Are you looking for a powerful phone, looks, or more features? We will attempt to answer these questions in this comparison.

The Samsung Galaxy 'S' series is the 'bread and butter' of the company's mainstream smartphone portfolio. Today we are going to look at the Galaxy S9 and see how it compares to the Pixel 3, which is the basic smartphone from Google's Pixel lineup. While the Galaxy S9 does not come with the same feature-set as the Galaxy S9 Plus, it is still a beautiful device. It has a little less RAM and only one rear camera, for example, but still shares its Adaptive Aperture feature, the same SD845 processor, Adreno 630 GPU, Hi-Res audio, stereo speakers, Intelligent Scan, Gorilla Glass 5, and wireless charging.

The Samsung Galaxy S9 comes with the best display on the market – a 5.8-inch Super AMOLED Infinity Display with an 18.5:9 aspect ratio. This taller and narrower display make movies, games, and videos more enjoyable and multi-window tasking much easier. Its QHD+ resolution produces 2960 x 1440 pixels and 570 pixels-per-inch (PPI) where you will experience vibrant colors and the blackest of blacks. The AoD is excellent, allowing the user to easily preview their notifications without turning on the phone, as well as saving on battery power.

The popular octa-core Snapdragon 845 coupled with the Adreno 630 GPU is the duo used in the majority of high-end smartphones for 2018 and the Galaxy S9 and Pixel 3 are two of them. In the Galaxy S9 it is clocked at 2.7 GHz and paired with 4GB of RAM and a base 64GB of expandable storage, although there's also 128GB and 256GB options you can order depending on your location and carrier. When sold in some other countries the Galaxy S9 uses Samsung's own Exynos 9810 octa-core processor clocked at 2.7 GHz along with a Mali-G72-MP18 GPU.

The camera main camera is 12-megapixel with the company's new Super Dual Pixels and uses Phase Detection AutoFocus  (PDAF), OIS, 8x Digital Zoom, and an LED flash with the new Adaptive Aperture – this new and exciting addition allows you to adjust the aperture from a large f/1.5 for low-light conditions to a small f/2.4 for brighter conditions. The FFC uses an 8-megapixel sensor with an aperture of f/1.7, auto-HDR, and autofocus that produces excellent selfies and video chats. A 3,000 mAh capacity battery powers the Galaxy S9 and should last a full day for the average user. Charging the Galaxy S9 is easy and uses Samsung's Adaptive Fast Charging or quick wireless charging with support for both Qi and PMA formats.

Samsung adds a lot of bloatware to its devices – some, like Samsung Pay, Intelligent Scan, Facial Recognition, Iris Scan, and heart rate monitor prove to be useful, while others like Bixby, SpO2 sensor, blood pressure monitor, DeX, and Samsung Connect might never be used by some owners. Everyone however will enjoy the new stereo speakers and look forward to a better AR Emoji program. The Galaxy S9 is available in Midnight Black, Coral Blue, Titanium Gray, Lilac Purple, Burgundy Red, and Sunset Gold – manufactures are finally realizing that users want more than simple black and white, although certain colors are dependent on location and carrier. It comes with Android 8.0 (Oreo) out of the box, although has been upgraded to Oreo 8.1. The device measures 147.6 x 68.7 x 8.4 mm and weighs in at 163 grams. It is retailing for about $800, but promotions are usually available.

Even though it has been an entire year since the Pixel 2 was released, the Pixel 3 models feel like rushed models as they lack the looks, QHD+ on the Pixel 3 model, the RAM, expandable storage, no 3.5mm headphone jack, and an $800 price tag for the Pixel 3. Most flagships introduced in 2018 provide a dual-camera setup, but the dual-cameras here are for the front-facing camera setup, not the main. The all-glass design allows Google to include wireless charging, and the Pixel 3 features all the usual Google-related features including Google Pay, Google Assistant, Google Lens, and Google Photos. There's an improved Active Edge, Playground, and Smart Lock, as well as an IP68 dust and water-resistance rating, and stereo speakers. You can buy it unlocked to work on any major U.S. carrier, but Verizon is still the exclusive dealer for the Pixel 3 phones.

Google increased the size of the display on both Pixel models and continues to use OLED technology. The size is 5.5-inches with Google continuing to use the FHD+ resolution of 2160 x 1080 pixels and a density of 442 PPI. Google did use the 18:9 aspect ratio this time which allows for better entertainment viewing as well as better geometric portions for multitasking. Google uses the AoD feature that makes it easier for the user to look at a notification without turning on the device, and this in turn, saves on battery. Gorilla Glass 5 protects the front of the Pixel 3.

For its processor power, Google went with a winning combo – the Snapdragon 845 quad core processor clocked at 2.5 GHz and an Adreno 630 GPU for outstanding graphics. The Pixel 3 only offers 4GB of RAM and a base of 64GB of non-expandable storage, although a 128GB model is available depending where you purchase the device. A 2,915 mAh capacity battery powers the Pixel 3 – up from 2,700 mAh capacity. When you need a fast charge, you can plug the Pixel 3 into the wall or now you can use a quick wireless charge.

Google did not seem to previously place such an emphasis on the quality of photos taken with Nexus devices, but that all changed when the company launched its Pixel brand and this continues with the Pixel 3. What is so amazing is that Google offers great photos with a single camera while most other manufacturers have moved on to dual-cameras. It still uses  a single 12.2-megapixel sensor with the f/1.8 aperture, OIS, and laser and PDAF, dual LED flash, and auto HDR. This year the FFC uses a dual camera setup that features auto-HDR – there are two 8-megapixels sensors – one is a wide angle with PDAF and an f/1.8 aperture and the second sensor is an ultra-wide angle with an f/2.2 aperture and no autofocus.

The new Google Pixel 3 is a solid built device that can hold its own against other mid-range to high-end smartphones, although its tech is shallow and short-lived. Shallow in that it only has an FHD+ display,  4GB of RAM, and 64GB of non-expandable storage. It can hold its own with the best processor and GPU out in 2018 and it receives the fastest Google updates. This brings up another shallow point – because of the fall arrival of the Google Pixel 3, the processor will soon feel outdated when the spring models from other manufacturers arrive. While there is only a single main camera, there is a dual front-facing camera setup. Google added wireless charging since the front and back are made from Gorilla Glass 5. It features an improved Google Lens and Active Edge. The device has no 3.5mm headphone jack but provides stereo speakers on the front. The Pixel 3 measures 145.6 x 68.2 x 7.9mm and weighs in at 148 grams. It is available in three colors – Just Black, Clearly White, and Not Pink. The Pixel 3 will cost about $800 with 64GB of storage and is available for purchase from the Google Store, Best Buy and as a wireless carrier exclusive through Verizon.

I have to pick the Galaxy S9 as the winner of this comparison. Other than getting fast operating system updates and the dual FFCs, the Pixel 3 has nothing over the Galaxy S9. The Galaxy S9 has a better look with its Infinity Display and near-bezel-less display, not to mention it has a QHD+ resolution. It has expandable storage, Samsung Pay, a 3.5mm headphone jack, Hi-Res Audio, Intelligent Scan, Heart Rate Monitor, SpO2 sensor, Samsung Connect, and DeX support.

The Pixel 3 does run a lighter version of Android and does get the fastest updates. The Pixel 3 does also have Photobooth, Top Shot, Super Rez Zoom, Wide Angle Selfies, and an improved Google Lens. However, when you consider the extras from the Galaxy S9 for the same price, why would you want to look anywhere else?

Advertisement
Trusted By Millions
Independent, Expert Android News You Can Trust, Since 2010
Publishing More Android Than Anyone Else
9
Today
25
This Week
518
This Month
3030
This Year
104509
All Time
Advertisement