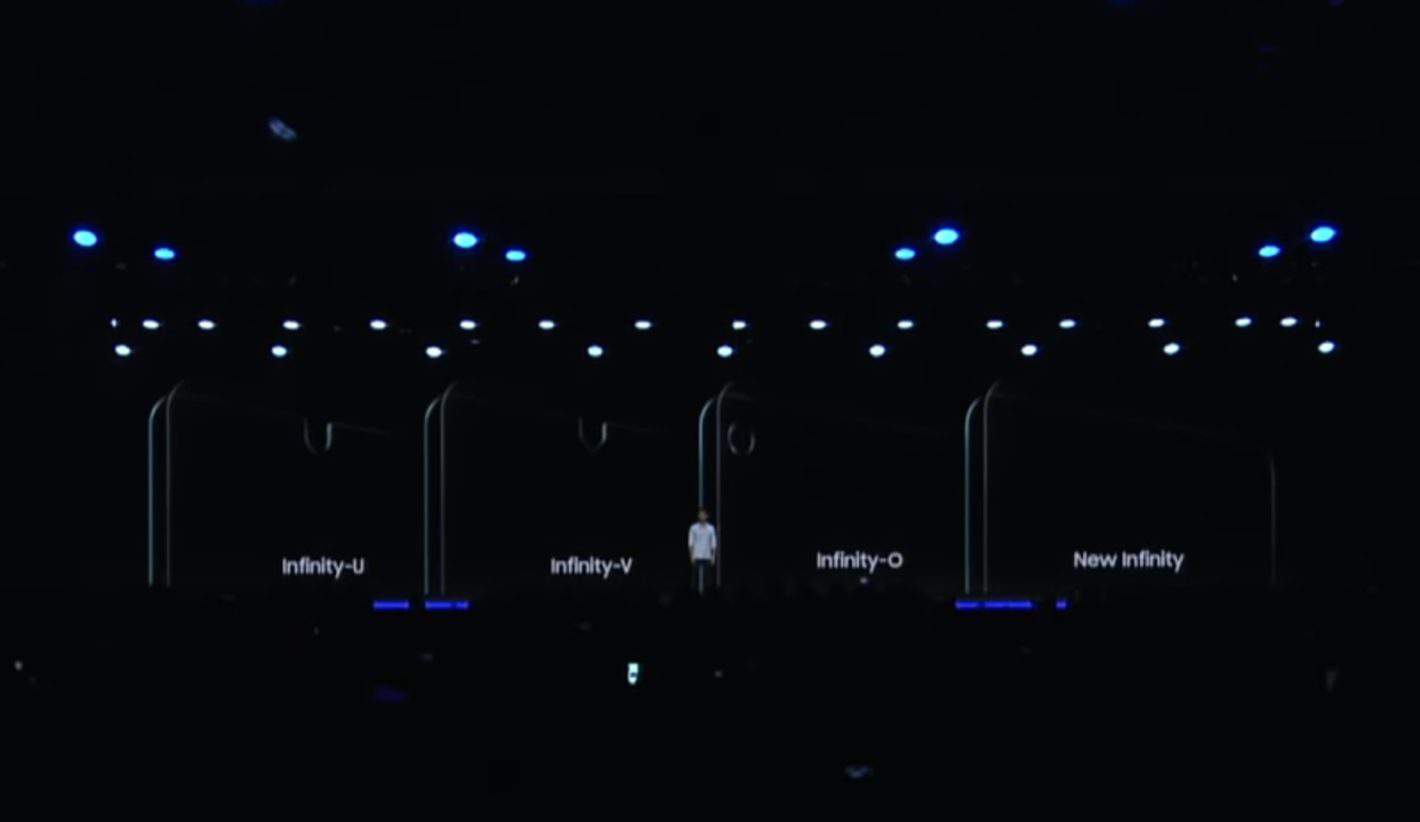 It looks like Samsung is preparing to add a notch to its smartphone portfolio at some point in the near future. In fact, Samsung might be taking the notch game to the next level as not only might the company introduce phones sporting a notch soon, but it could come with any one of three different notch designs the company has apparently been working on.

The information on this has come straight out of the Samsung Developer Conference 2018 keynote presentation which took place earlier today and saw the company announce its new ‘Infinity Flex’ display technology for foldable smartphones, as well as its new ‘One UI’ designed to declutter the Samsung user experience on Android phones. Both of which are also designed to work together for an even more futuristic phone experience. However, as part of the presentation Samsung also briefly talked about notches and the most revealing aspect was a slide that was present in the background – the one shown above. As this slide clearly highlights that Samsung views the inclusion of a notch as the opportunity to bring about different flavors of the notch. In other words, Samsung does not look likely to just toy with the notch but instead plans to go all-in.

Samsung plans to utilize three different notch designs which will arrive to market branded as Infinity-U, Infinity-V and Infinity-O. All of which therefore stick closely to the company’s ‘Infinity Display’ branding in general. What’s more, the names are distinctly related to the design of the notch with the “Infinity-U” notch adopting a u-shaped design that’s extremely similar to the type and style of notches that are most often seen on phones today. In contract, the “Infinity-V” notch is v-shaped and therefore more pronounced and sharper at all three primary points. While the most interesting of the three new designs is the “Infinity-O” notch which is not only o-shaped in design, but is technically speaking not even a notch. Instead this one appears more as a floating o and atypical of notches in general it’s positioned off to the left of the device’s top panel. Essentially, this is just a cut-out to account for the inclusion of a front-facing camera. It’s also worth noting the image above also details a “New Infinity” design which seems to not have a notch at all. Although unlike the other three options, no further details on this were provided during the main announcement.

Background: Samsung, for better or worse, has remained one of the last bastions of a no-notch design and to the point where it has previously taken aim at other companies for making the move to a notch. With the most public example of this coming at the expense of Apple and its iPhone line. Which could be why Samsung has now taken what is arguably a very low-key approach to confirming the notch is coming to its phones. An approach which is likely to help to let the information sink in more slowly compared to a situation where Samsung just suddenly announces a new phone that sports a notch. Instead, by the time a Samsung notch phone arrives, the addition of the notch will have become old news to some degree.

In terms of the new designs, and while the Infinity-O variant appears to be the most novel and unusual, it’s not actually the first time a design like this has surfaced as there are a number of other companies, including Huawei that are understood to be currently working on a very similar hole-like design as a means to better include the front-facing camera while keeping the impact on the display’s used space to a minimum. So even this is not something that is specific to Samsung, although the comments made today do make it clear that Samsung not only plans to use multiple variations of the notch, but also to brand them differently.

Impact: While some Samsung devices owner might see this as a negative move by the company, it’s in reality a sign of the times. As in spite of Samsung having done well to hold out as long as it has, the market in general has been turning to the notch and not just at the hardware level but also the developer level. So it stands to reason that Samsung would eventually have to make a move to a notch lifestyle as well, considering everyone else is, as well as app developers and even Android as an OS.

What’s is less clear, however, is when that Samsung move is scheduled to take place. During the announcement, Samsung’s Anjum Hussain was the speaker on stage when the new designs were showcased and did briefly confirm the company was working on these three specific designs by name, while also stating that these designs are “just around the corner.” At the superficial level, this could be interpreted as Samsung is planning to launch a notch-equipped phone(s) in the opening months of 2019. Which if correct, would lend to the suggestion that maybe the phone(s) in question will be demoed more in product form during the upcoming CES and/or MWC events. Likewise, if the company plans to launch the Galaxy S10 with a notch then it would be expected that will happen within the same early 2019 time-frame, during a standalone event just before or after MWC 2019. Then again, maybe Samsung will opt to first include a notch on a lesser prominent smartphone as a means to ensure it does not run the risk of turning away dedicated Galaxy S buyers which in turn could potentially impact greatly on the company’s revenue for the year ahead. In terms of the latter option, it’s not unusual for Samsung to take the approach where it adds features to lower-tiered smartphones first and as a means to ensure they are market-ready and problem-free prior to being featured on devices that are expected to be sold in far greater quantities. So that is a distinct possibility in this case as well. Irrespective of when, or on what device, it’s at least now clear a Samsung phone with a notch is coming.