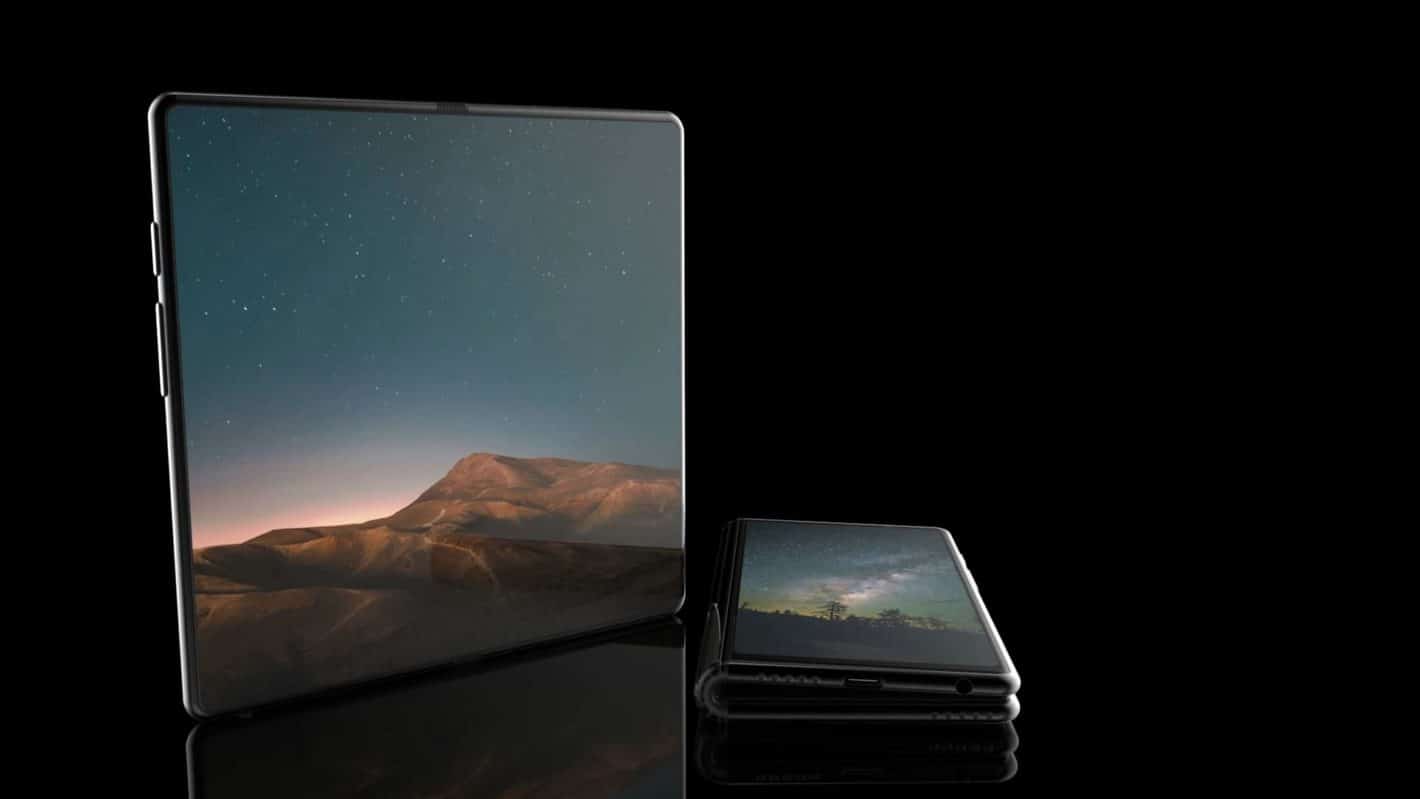 Samsung had shown off its foldable smartphone demo prototype last week, and while we're waiting for the actual device to launch and become available, a YouTube channel called 'Concept Creator' has published a concept design of the Galaxy F, aka the company's foldable smartphone. This concept design is shown in form of a video, of course, and that video is embedded down below, in case you're interested, and it has a duration of about two minutes. Having said that, this concept device sports two vertically-aligned cameras on the back, below which you'll notice an LED flash, and some other sensors, a heart rate sensor, perhaps. The phone itself is made out of metal and glass, and it has two display, one smaller, outer display on the front, and a huge panel when you unfold the phone. The hinge itself is located on the left-hand side of the phone (when folded), while the power / lock, volume up, and volume down buttons are also on the right, until you unfold the device, then they switch to its left side.

When unfolded, this phone has basically no bezel, that's at least what the designer envisioned it, you basically get a large tablet-like display when you unfold the device. When folded, there are some bezels on the sides, and above and below the display, noticeable bezels, actually. Thanks to the hinge that is located on the left side of the phone, this handset has a rather odd shape when folded, its front and back sides aren't exactly aligned properly, and have a rather odd shape, while there's some wiggle room in between them. The final product probably won't look like that, as the phone would be somewhat difficult to grip and use, but we'll see what will happen once the company releases the device, and that will happen sometime next year. That is more or less all the info that the source shared, this is just a concept design, of course, which is why specs are not attached to it, or anything of the sort. This concept design is based on rumors and leaks, to some degree, though the designer definitely used some of its imagination to design this device. If you'd like to check out this concept design / video, it's embedded below the article.

Background: Samsung had already confirmed that its foldable smartphone is coming next year, while the company actually demoed the technology at the Samsung Developer Conference last week. The company brought out a demo device that has its foldable display attached to it, and has demoed how the technology will work, but based on what we've seen, it's definitely not ready for primetime just yet. The transition from one display to the other when the device gets folded / unfolded is too slow, and what Samsung had shown is definitely not the final hardware, though that was to be expected. Bezels on that device were extremely thick, and if the company plans to make any sort of success with the device, those bezels will need to be much thinner. The company's foldable smartphone is rumored to be called the Galaxy F, as the 'F' stands for 'Foldable' at least if rumors are to be believed.

Rumors are suggesting that the company's foldable smartphone will feature a 7.3-inch foldable internal OLED display, while an external one will measure 4.6 inches in diagonal. The device will reportedly arrive with the model number 'SM-F900U', while the Samsung F900USSQU0ARJ5 is reportedly a US testing unit of the device. The phone is expected to ship with 512GB of internal storage, and it will ship with Samsung's 'One UI' that the company has shown off last week during its developer's conference. The phone is rumored to cost around $2,000, so it will be quite expensive if that info is accurate, while it is also said to weigh around 200 grams. Rumors are also saying that the phone will be able to be folded / unfolded over 200,000 times, so expect to see a rather well-made hinge included on it. Samsung is not the only company working on a foldable smartphone, a company called Royole Corporation actually introduced its Royole FlexPai smartphone quite recently, and you can read more about it here.

Impact: Samsung is expected to introduce its foldable offering next year, but in addition to Samsung, both LG and Huawei are expected to introduce their foldable offerings in 2019. LG is actually rumored to show off its phone in January, during the Consumer Electronics Show (CES) in Las Vegas. Huawei, on the other hand, will introduce its offering a bit later, as the company's CEO, Richard Yu, said recently that the company will announce its foldable smartphone in less than a year, so we'll probably see the company's foldable phone in the second half of next year. Other OEMs will probably try to release their foldable offerings as well sometime in 2019, but it remains to be seen which companies are we looking at here. Royole Corporation did manage to surprise quite a few people by releasing its FlexPai smartphone, and despite that, all eyes are on Samsung and LG now, as both of those companies are expected to announce their foldable smartphones in the first half of next year, if not first quarter. Foldable smartphones are actually an interesting concept, but it remains to be seen how useful will they be, in other words, how successful will they be. If the Galaxy F smartphone ends up costing $2,000, Samsung can't really expect a ton of people to buy it, if it ends up having that price tag, it will be more of a test device rather than anything else, a test device for Samsung to see how interesting people are in it, and if there's any point in making new device which uses the same technology. An idea of foldable smartphone is appealing to people as they'll get a larger phone in a smaller form factor, basically, as its display will be able to fold out, but on the other hand, such devices will be considerably thicker than regular phones, and will have other tradeoffs, like thicker bezels, for example.