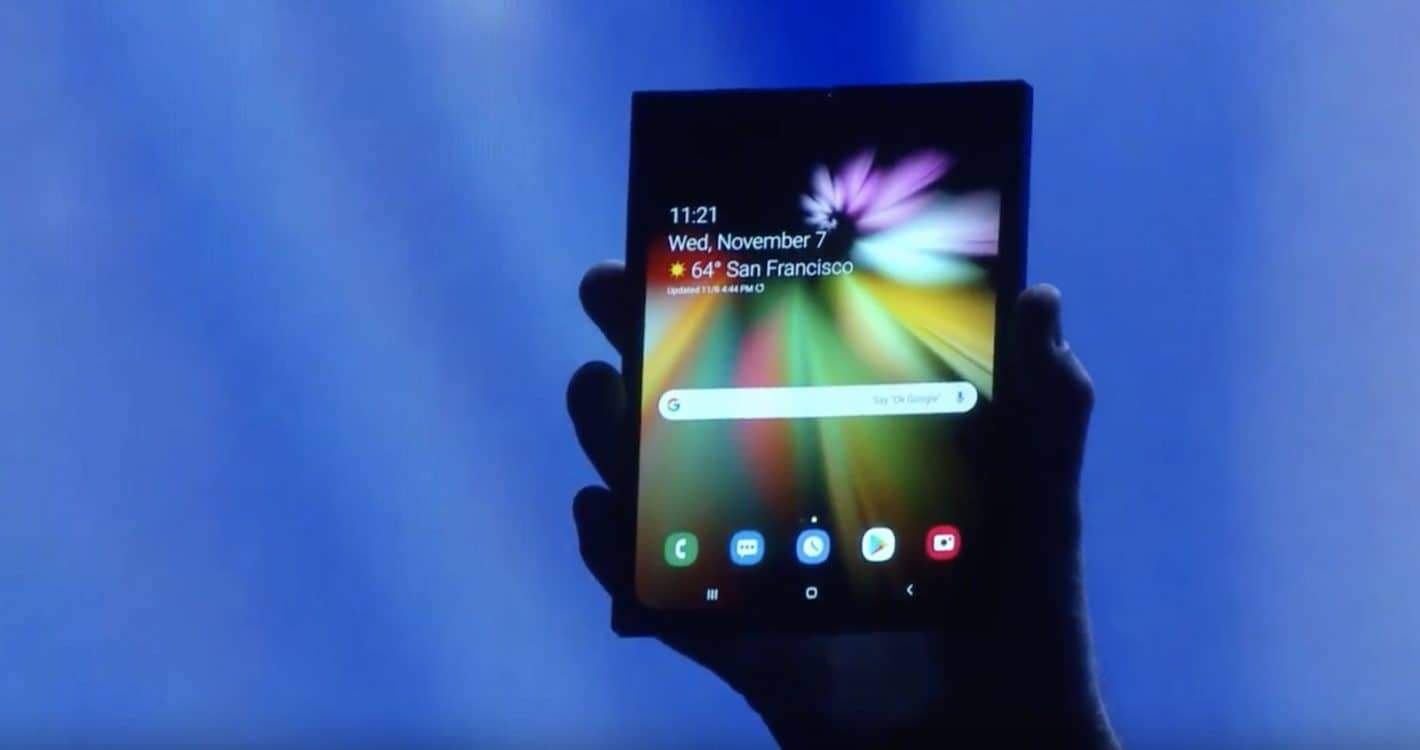 The specs for Samsung’s Infinity Flex Display which is expected to be in use on the company’s upcoming foldable phone(s) have now been revealed. The information was provided initially by Samsung during the company’s Developer Conference and during what is presumed to have been a closed door session. Since then the specs and other details have been widely shared by various attendees on social media, including Shara Tibken on behalf of CNET.

In terms of the specs, and as to be expected, they do differ depending on the nature of how the phone is used. For example, when used in what Samsung refers to as the “Cover Display” form then the display measures in at 4.58-inches along with a 840 x 1960 resolution and a 21:9 aspect ratio. This is along with a screen density of 420 dpi. In contrast, when used in the “Main Display” form the display size dramatically increases to 7.3-inches along with a boost in the resolution to 1536 x 2152. While the screen density remains the same in this mode, the aspect ratio adjusts to 4.2:3.

Background: It has been a busy day in terms of Samsung news with the company having now announced a new UI designed to declutter the user experience on Android-powered Samsung phones, as well as the company providing a sneak peak at the different types of notches Samsung will likely be using on upcoming devices. However, what was arguably the most noteworthy announcement of the day was the first public outing of the company’s first foldable phone (shown above). To be clear, Samsung did not outright unveil a phone but did showcase a design which is expected to be representative of the company’s foldable phone. More pertinently, the showcasing was designed to demonstrate the display technology which will be in use on these devices, and what Samsung is now officially calling its “Infinity Flex” display technology. This announcement also (uncoincidentally) chimed with another announcement made by Google today during its own Android Dev Summit which confirmed Android is now officially adding support for foldable displays. With the two announcements coinciding as they have, it seems clear the technology is now moving closer to a consumer-ready state. What’s more, Samsung’s implementation of a foldable phone will likely be one of the first and certainly the most high-profile to arrive to market.

In spite of the timing of the announcements from Google and Samsung, the latter did not reveal too many details about the phone, and also did not really provide any detailed information on when its solution will come to market other than stating how it’s preparing to mass produce the display in the “coming months” which has now naturally led to the suggestion the technology will be more readily available at some point in 2019.

Impact: When first announcing the new foldable phone design Samsung was noticeably quiet on the specs and on providing almost any in-depth details in general. Which makes these specs all the more revealing as it clearly now seems to be the case that Samsung is primarily banking on the use of the unfolded form as the main purpose and selling point behind its foldable phone. In fact, Samsung has pretty much said this outright by actually referring to the unfolded form as the “Main Display” mode. That aside, the now-revealed specs also highlight why Samsung has taken this approach as the aspect ratio means this is going to be a rather unusually tall smartphone when used in the Cover Display mode. Not to mention, it’s not just the height of the phone that might prove unappealing to users in this format, but also the appearance in general with the Cover Display use case appearing far more dated in terms of its look and design compared to how the product will look when used in an unfolded state. Which places the device in somewhat usual territory as it’s clear that in an unfolded state it will be slightly large by normal phone standards coming in at 7.3-inches. While the folded and more user-friendly state — in terms of portability — won’t actually be all that user friendly to begin with.

Subsequent reveals by Tibken have provided a bit more clarity on this with it seemingly the case that Samsung will promote the Cover Display form as more of a quick-access mode for some of the more basic phone-related tasks such as easily making phone calls, replying to messages, taking an image and so on. In many ways, it could therefore be argued the Cover Display is deigned to be a glorified version of the notification panel or the always-on display already in use on many smartphones, including those from Samsung. In contrast to the foldable and almost tablet-like form will provide significantly greater functionality, including the option to multitask more effectively. For example, Tibken also reveals that Flipboard is one of the services that’s already working on a cross-form version of the app that provides access to a limited view of the app when the Cover Display is in use, and a fuller and more usable version when accessed in the Main Display form.

Of course, it does need to be pointed out here that this is a first-generation product and so it should naturally be expected that the end result might not look as good as it could or boast the best of both worlds. What is more important at this state of a new product’s lifespan is that it works well enough and satisfies consumers and the market alike as a proof of concept. From then on Samsung will inevitably look to further iron out the design points and presumably look to make a device that appears as attractive and as useful when used in either mode. In the meantime, however, if you are planning on picking up this phone when it does eventually become available, you should also primarily expect to use it in an unfolded form with the option to fold it down as and when needed – and not the other way around as some might have previously expected.