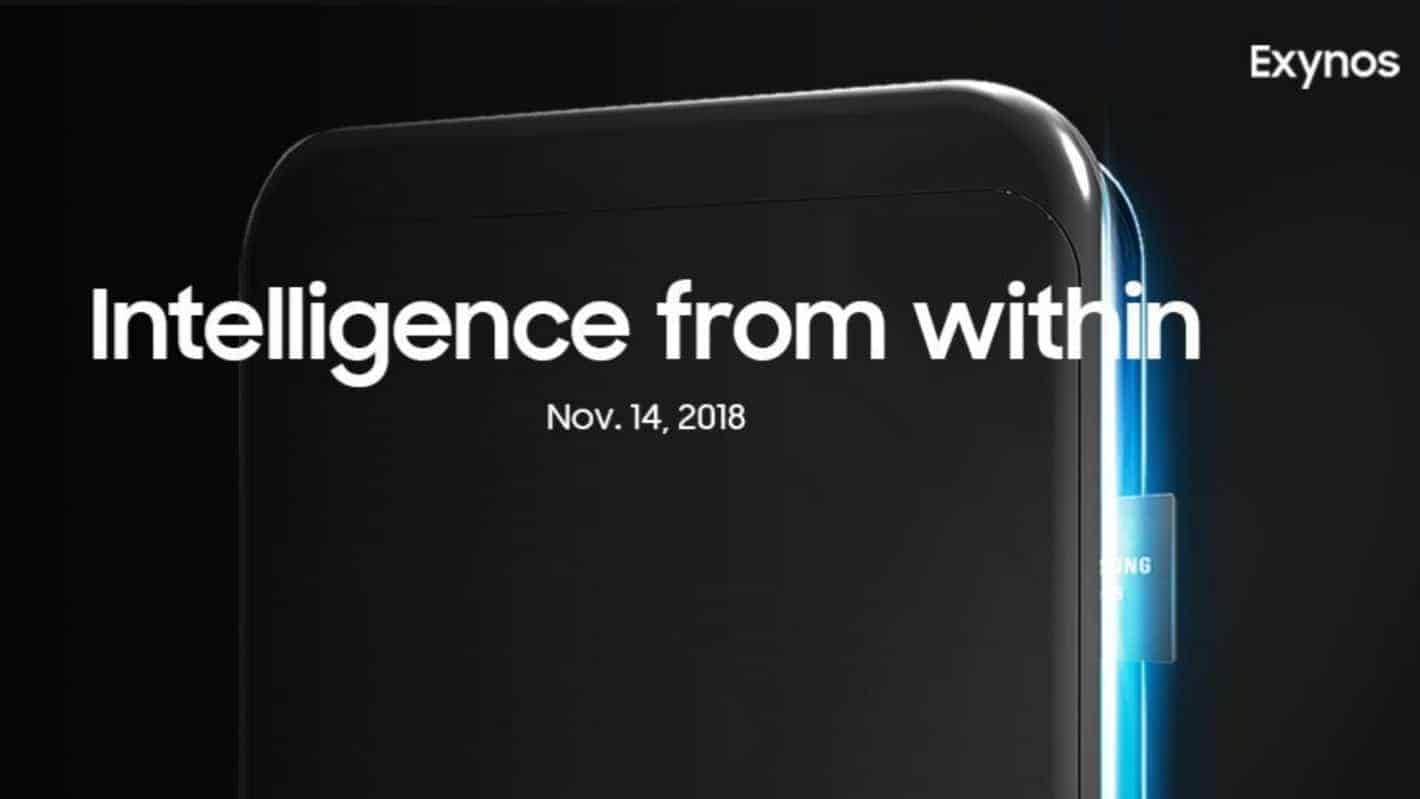 Samsung has now hinted that there's some big news in the works for its Exynos chipsets, with an announcement coming in just a few days on November 14. The company took to its Twitter account designated to Exynos today with a not-so-subtle message about the event, which reads "Think next." That's accompanied by an image that clearly shows the form of a Samsung-style smartphone, the message "Intelligence from within, and what appears to be a mobile chip squeezing its way out of the handset. The obvious implication, given the Korean tech giant's activity at this year's Samsung Developer Conference (SDC), is that central tenet up for discussion will be AI and its inclusion in Exynos SoCs.

Background: News of a brand new Samsung-made chip designed to include AI-specific partitions or hardware is not new by any stretch of the imagination. Rumors and speculation have cropped up in earnest about the new component,  tentatively expected to be marketed as the Exynos 9820, for some time now. The most recent reports have suggested the silicon would be built on the 7nm EUV process and will include at least two dedicated neural processing cores. The news also isn't surprising in terms of innovations. In fact, the concept is very similar to what one of Samsung's leading competitors in the smartphone market – namely, Huawei and its subsidiary HiSilicon – has brought to the table with the Kirin 980 SoC. That's that company's followup on its Kirin 970, featuring two dedicated AI processing nodes on top of a more traditional design.  Meanwhile, Qualcomm is expected to be moving toward an AI-centric design as well with its Snapdragon 8155, though to be launching in early 2019.

Samsung's chip is currently anticipated to be similar in concept to both of those designs but will likely bring its own take on things to the table. It's also expected to launch during the first half of 2019 and just in time for its predicted inclusion as a core selling point for the company's still-unannounced upcoming next-generation flagship, likely to be sold as the Samsung Galaxy S10. If that turns out to be the case and other rumors surrounding that handset are to be believed, that means there will be at least three and possibly four Samsung handsets powered by AI next year. More specifically, leaks and insider reports have indicated that Samsung might launch a budget-friendly variation of its flagship, in addition to its traditional Galaxy S10 and Galaxy S10 Plus models. Subsequent reports have also suggested there could be yet another model above that, which takes things further by including 5G networking capabilities.

Impact: Setting that aside and as alluded to above, however, the new chip will almost certainly part of a much bigger effort on Samsung's part. During this year's SDC 2018 event in San Francisco, several company executives took to the stage to discuss an all-encompassing battle plan for transforming Bixby AI into a true competitor against Google Assistant and Amazon Alexa. Beyond that, the company is opening up all of its development tools to the more general developer community and refocusing efforts and investments in a bid to utterly dominate the AI industry. One of the promises made at the time was that Samsung would incorporate AI in every product it sells by the end of 2020. It's most likely still too early for that promise to be coming to fruition. However, there's also no reason to think that the upcoming Exynos event isn't linked directly to that promise in some way rather than only being intended for flagships and phablet smartphones made by the company – although the obvious focal point will be on smartphones.