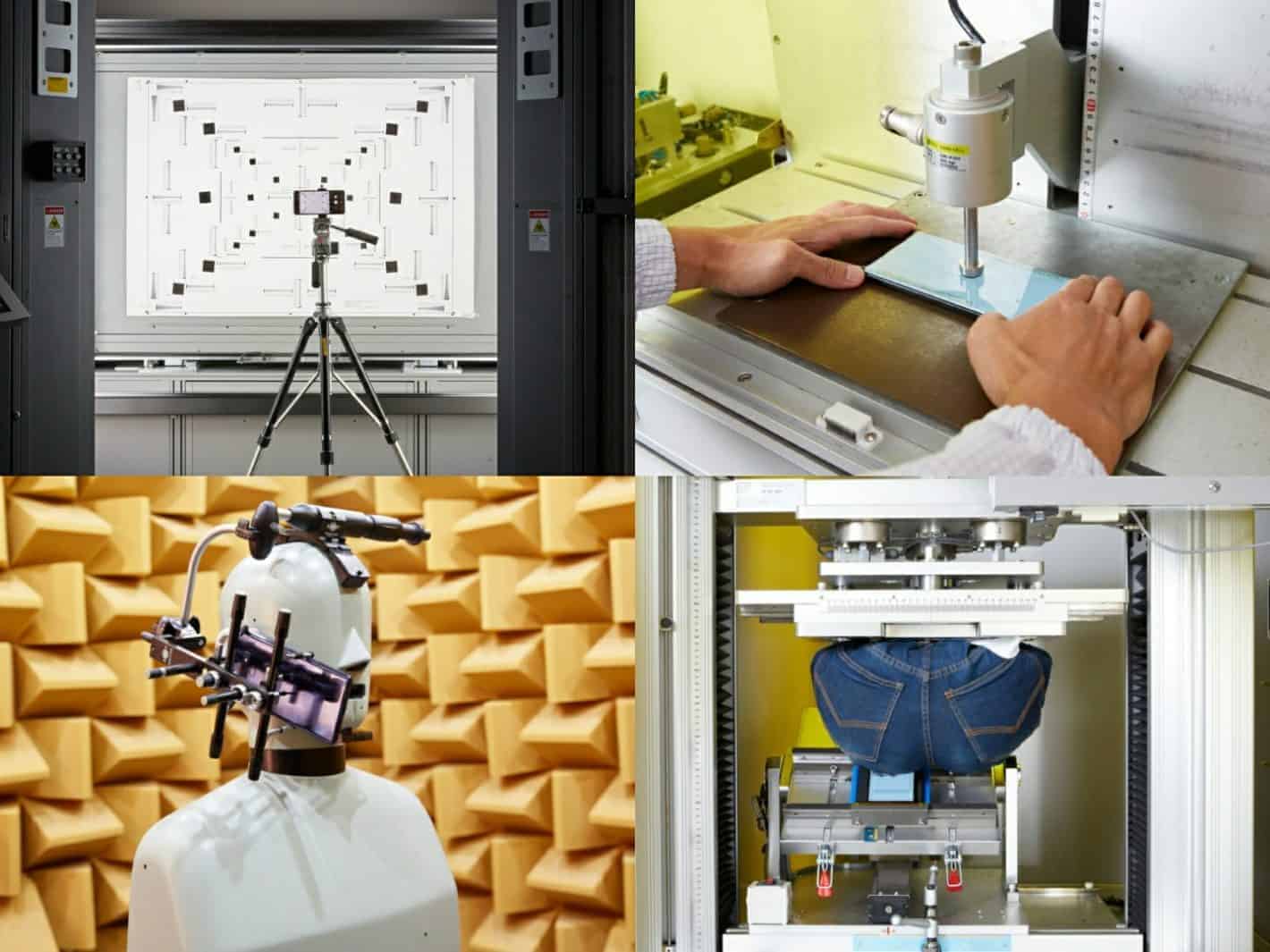 The testing of the durability, reliability, and quality of Samsung's smartphones and wearables includes validation across a total of seven categories and at least one robotic rear-end designed to emulate a consumer sitting on their electronics. That's based on a walk through the company's Reliability Test Group site, offered up alongside images of the process and shared by Samsung via its official newsroom that included an image of the mechanized rump taking a seat on what appears to be a Samsung phablet. Of course, a customer sitting down on their smartphone by accident isn't the only test performed or circumstance recreated in the lab in question. Staying within the durability category, the Korean tech giant also has a machine that repeatedly slips in and out the SIM drawer on its devices, presses buttons, plugs and unplugs from the headphone jack, and more. Yet another apparatus is used in a fashion similar to a clothes dryer, tumbling things around while there's also one that is used to put pressure on a thumb-sized area on the display across various points.

Of course, durability testing also includes a complete separate segment including drop tests from various heights and on multiple surfaces to determine how the handset or wearable falls from each and where reinforcement might be needed. From there, the company tests how a handset dissipates heat and how the temperatures reached during high-intensity gaming and app-use sessions affect performance. The design of its devices is reiterated throughout that testing process as well as all of the other tests but Samsung says that heat testing has become increasingly important as devices are becoming "smarter." So thermal imaging is used to test not only how much heat is created but where that heat comes from in order to keep performance up and everything safe.

As with durability testing, the company also checks to ensure that the phone itself can continue to be used under a variety of circumstances as well. That starts with the environmental test lab, where devices are placed in an enclosed environment that mimics conditions found in various parts of the world with alterations made to everything from temperature to humidity within that controlled system. On the other hand, some tests need to validate that devices are ready to operate under even more extreme conditions in order to be ready for certifications such as an IP Code rating or atmospheric pressure standards (ATM). To that end, the company has a wide assortment of machinery in its waterproof lab that imitate rain, bursts of liquid water, submersion, controlled pressurization during submersion. That ensures that whether or not a handset or smartwatch is rated for something as light as rain or something as extreme as freediving, the gadget will live up to expectations and pass certification.

Finally, Samsung tests both the cameras included in its hardware as well as the audio equipment. Both of those aspects of its handsets are relatively complex and comprehensive. For the camera sensors, brightness, color clarity, and image noise are measured in images snapped under a huge variety of lighting simulated for both indoor environments and out. Real world testing is also performed to ensure that what's seen in the lab translates well in the much less predictable and less ideal conditions encountered there. Similarly, testing for audio takes place in two separate chambers which simulate real-world circumstances under very different conditions. The first is an anechoic chamber which completely eliminates external noise and the second simulates the phone's sounds while the phone is being used in phone calls, whether through the speakerphone, headphones, Bluetooth, or the earpiece. An assortment of high-quality listening devices capture all sounds and those are analyzed in order to help make adjustments wherever possible.

Background: Of course, all of that testing really shines through in Samsung's most recent flagship handset, the Galaxy Note 9 – which Android Headlines found to be very nearly too good. That handset costs consumers just short of $1300 at the upper limit and the testing makes a lot of sense in that context. It's also true that no smartphone ever released by any manufacturer is going to be without quirks or weaknesses. However, Samsung has particularly good reason to go through the extra effort. Not only has the company stepped things up considerably and consistently across the board in the wake of an inherently unstable Galaxy Note 7 battery and the media fiasco that followed. The company is also currently at the very top of its game in that arena and facing challenges from the likes of Huawei and other Chinese smartphone manufacturers as well as the ever-looming presence of Apple's iOS smartphones. While the latter of those has been around for quite some time, the former has steadily made gains through a more direct focus on high-value and low-cost handsets that undermine the premium standard Samsung is setting.

What's more, the impact of bugs, hardware deficiencies, and other negative circumstances surround device launches and first reactions from customers cannot be understated. Google, for example, has faced persistent problems with audio hardware and other characteristics in its own flagships, in spite of its recent acquisition of HTC's top talent and having a constant inside-view of and control over Android OS itself. The audio issues that appear to stem from problems in the hardware and have been in play since the second-generation of the Pixel-branded smartphones but have continued through the Pixel 3 and Pixel 3 XL handsets too. Meanwhile, more recent problems range from overheating of the device during charging and causing shut-downs or crashes when the camera is used to images not being properly saved and the hardware simply failing to work outside of the primary camera app.

Impact: While Google's problems may seem entirely unrelated and whether any of those issues are widespread or not, they are having a detrimental impact on the company's public image and on its sales as a result. That's something Samsung itself witnessed first-hand with the Note 7 battery explosion problem, mentioned above. More importantly, it appears to be something that the company is looking to avoid going through anything like that again or putting its customers through again at all costs.