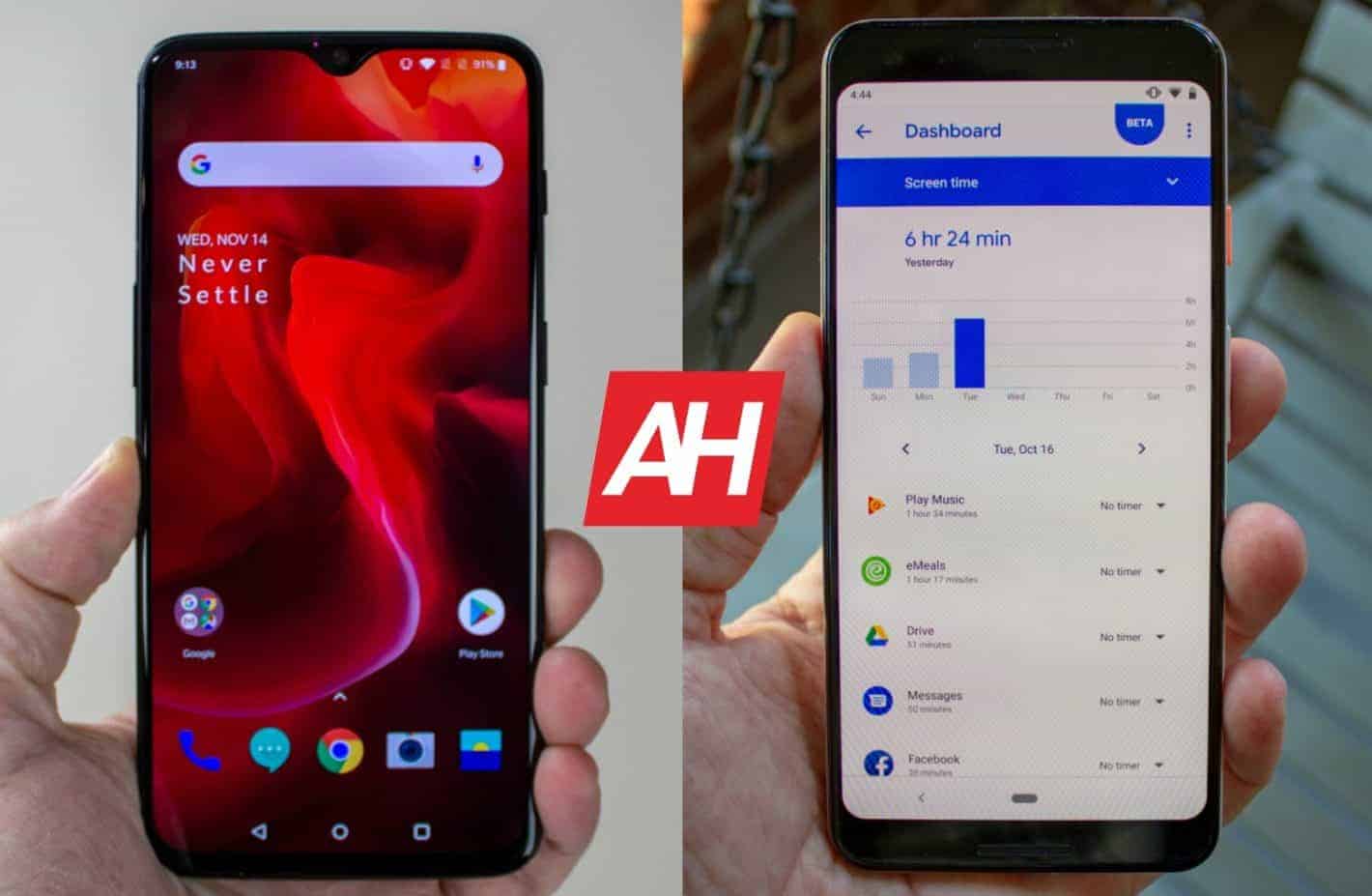 Do we have a good one for you today – the OnePlus 6T goes up against the Google Pixel 3. Here we have two smartphones that are solidly built, low on features, but are powered by the newest Snapdragon processor and Adreno GPU. The OnePlus 6T is the better looking of the two devices, and features a larger display, two main cameras, more RAM, more storage, and an in-screen fingerprint sensor. The Pixel 3 has less RAM and storage, dual front-facing cameras (FFCs), wireless charging, and an IP68 certification. Google products are also on the menu – Google Assistant, Google Lens, Active Edges, Smart Lock, Playground, a smaller battery, stereo speakers, and a rear fingerprint sensor.

The OnePlus 6T and the Pixel 3 do have several things in common. They both use the OLED display technology, an 18:9/19.5:9 aspect ratio, and Gorilla Glass for protection. They both use the same octa-core processor, Adreno 630 graphics processor, and non-expandable storage. Both have great camera systems, non-removable batteries, and roughly the same physical size. They both have the usual suspects – NFC, Bluetooth v5.0, Wi-Fi, USB Type-C port for charging and data transfer. Both will have Google Pay, Android 9 Pie, and neither provide a 3.5mm headphone jack.

Please take a careful look at the detailed specifications comparison chart below and here you will see just how these two high-end Android smartphones stack up against each other. Which one is the better purchase by offering the most technology for the least amount of money? Are you looking for a powerful phone, looks, or more features? We will attempt to answer these questions in this comparison.

Ever since OnePlus opened its doors for business, the company has offered a fine smartphone at a very reasonable price. Another OnePlus pattern is to offer a model early in the year (like the OP6) and later in the year upgrade that model to a “T” version, such as the OnePlus 6T. This marketing method has served OP well over the past years. Although that ‘reasonable price’ has always come with a few caveats and in the past these have included non-expandable storage, an FHD+ resolution, no IP68 certification, and no wireless charging even though the OnePlus 6T has an all-glass construction. The dual camera takes good pictures along with upgraded software, and it has a large FFC. The new OP6T has the coveted in-screen fingerprint sensor in a display that also has a small notch in the top-center.

The OnePlus 6T sports a 6.41-inch AMOLED FHD+ display with 2340 x 1080 resolution and a density of 402 PPI. It has a ‘nibble’ out of its display resulting in a very small notch and the display also utilizes a more modern 19.5:9 aspect ratio resulting in a taller and thinner form overall. This makes viewing movies, video, and games better. It you are into multitasking with multiple windows, this ratio will give you two perfect squares on the display. It is protected by the newest Gorilla Glass 6.

Like most 2018 flagships, the OnePlus 6T is powered by the octa-core Snapdragon 845 clocked at 2.8 GHz. This is paired with the powerful Adreno 630 GPU to handle all of your graphic needs for movies, videos, and gaming. OnePlus has generously included a base of 6GB of RAM and 128GB of non-expandable storage. The company also sells a version that includes 8GB of RAM and 256GB of internal storage – also non-expandable. There’s no wireless charging which is strange because it has a Gorilla Glass back, although it does pack a 3,700 mAh non-removable battery with support for the company’s Dash Charge solution.

OnePlus is a straggler in some instances – lack of wireless charging – but in the forefront for many things – dual cameras and in-screen fingerprint scanner. The OnePlus 6T has a main camera that sports a 16-megapixel sensor with an f/1.7 aperture, PDAF, and a dual LED flash. The secondary camera makes use of a 20-megapixel sensor with the same f/1.7 aperture and both EIS and OIS for added stability. A 16-megapixel FFC is included with an aperture of f/2.0, EIS, and Auto HDR. The Alert Slider on the side of the device can be used to zoom in/out when you are in the camera app. The software is improved to make taking pictures a better experience.

People that buy a OnePlus 6T are in-the-know users that are often willing to give up some of the bells and whistles to get the most for their money. Power-wise, you get the top-of-the-line processor/GPU used in most 2018 flagships – the Pixel 3 included – it packs an OLED display, offers 6GB of RAM and more memory for better multitasking, dual cameras, and a large FFC. It uses the company’s light touch OxygenOS UI over top of Android 9 Pie for a smooth and fast user experience. The OP6T is well built and not bad looking (except for its notch), but don’t expect a bunch of extra features.

Google had an entire year to make the Pixel 3 shine, but all we got is the Pixel 2 with a little polish. The Pixel 3 lacks the looks of a flagship device, especially when you consider the $800 price of the Pixel 3. It still has large bezels, no QHD+ display, lack of RAM and storage, no 3.5mm headphone jack, and a single camera that is starting to show its age. The Pixel 3 includes dual FFCs this year rather than dual main cameras and packs in a set of stereo speakers. Of course, it offers the usual Google-related features including Google Pay, Google Assistant, Google Lens, Google Photos, an improved Active Edge, Playground, and Smart Lock. The Google Pixel 3 is sold unlocked to work with all US carriers, but Verizon continues to be the phone’s exclusive dealer – this means you will find it for sale in Verizon stores and you can take advantage of monthly payments.

Google continues to use the OLED technology for brighter colors and blacker blacks. The display is 5.5-inches, but only an FHD+ resolution of 2160 x 1080 pixels. This gives it a density of 442 PPI. Google did go with the 18:9 aspect ratio, for a better entertainment experience. The AoD feature on the Pixel 3 not only saves on battery life, but also makes it easier for the user to check their notifications. Gorilla Glass 5 covers and protects the front of the Pixel 3.

Google picked the best available combo it could in 2018 – the octa-core Snapdragon 845 processor clocked at 2.5 GHz and the Adreno 630 GPU for the best visual experience. The Pixel has only 4GB of RAM and 64GB of non-expandable storage, although a 128GB model is also available to order. The battery capacity increased from 2,700 mAh to 2,915 mAh and will easily power the Pixel 3 throughout an entire day. For charging the battery, you have the choice of wired or quick wireless charging.

Ever since Google introduced the Pixel line the phones have included an excellent camera. A top-rated camera in spite of the use of a single sensor. It uses a 12.2-megapixel lens with an f/1.8 aperture, OIS, laser and PDAF, a dual LED flash, and auto HDR. In an unusual twist, the Pixel 3 has dual FFCs. There are two 8-megapixel sensors – one with PDAF and an f/1.8 aperture and the second sensor is a wide-angle with an f/2.2 aperture and no autofocus.

When you consider the build quality and price, the Pixel 3 can hold its own against other high-end smartphones, however, when it comes to features, we are looking at a mid-range device. It is rather tech shallow in some areas – FHD+ display, 4GB of RAM, 64GB of non-expandable storage, and a single front camera – yet it has an IP68 certification, the latest processor, and dual FFC cameras. It features an improved Google Lens and Active Edge. The Pixel 3 measures 145.6 x 68.2 x 7.9mm and weighs in at 148 grams. It is available in three colors – Just Black, Clearly White, and Not Pink. The Pixel 3 will cost about $800 with 64GB of storage and is available for purchase from the Google Store, Best Buy and as a wireless carrier exclusive through Verizon.

Google Pixel 3 owners will disagree, but the facts do not lie – the OnePlus 6T is the winner of this phone comparison. It has a larger display with AMOLED technology. It has more RAM, more storage, dual main cameras, a larger battery, a fingerprint sensor under the display, Android 9 Pie, and will cost you about $250 less that the Pixel 3.

Unless you MUST absolutely have IP68 certification, the fastest updates, and dual FFCs, I can see no reason to buy the Pixel 3 – especially when it retails for $800. Google is asking too much money for what you get.