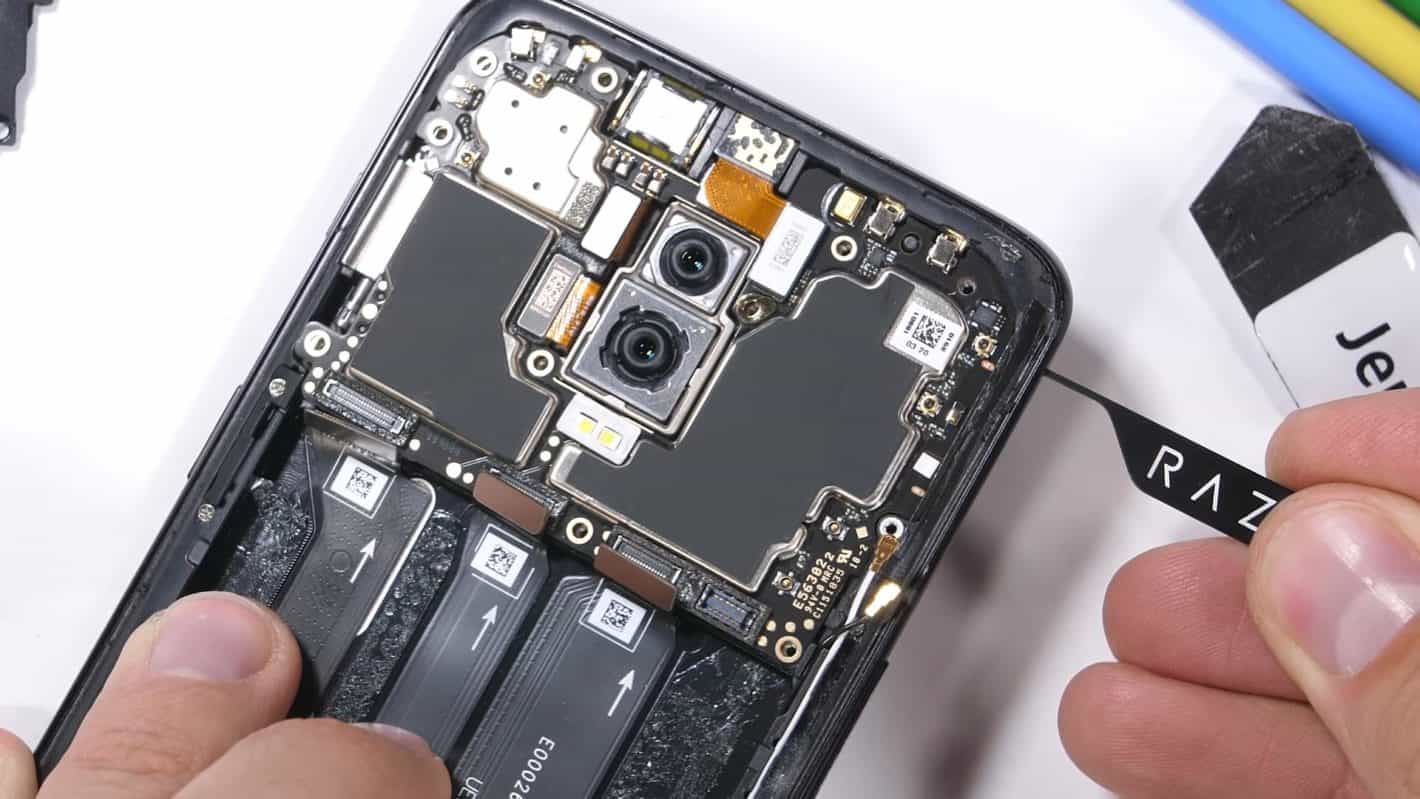 Following the durability test and creating a clear black OnePlus 6T, JerryRigEverything has decided to disassemble the OnePlus 6T on its YouTube channel, and reveal what lies on the inside of the device. This teardown, amongst other things, shows us all what the phone's in-display fingerprint scanner looks like, and the teardown video has a duration of almost six minutes, while it is embedded down below. This procedure can also help you repair the device, or help your local smartphone repair service do the same, if, for some reason (if the damage was entirely your fault), you opt not to return the phone back to OnePlus for repair.

In any case, the first step you need to take is to power off the device. Following that, you will need to heat up the phone's back cover quite a bit, preferably using a heat gun. Then you'll need a rather large suction cup which needs to be attached to the back of the device, and a razor blade or a similar tool in order to cut through the adhesive that holds the phone in place, though be careful not to cut something on the inside using the razor blade. Once you do all that, and remove the back cover, you'll need to remove the silver hinge that is holding the battery in place, and you can do that by removing a screw that is holding it in place. A pull tab will be there for you to pull the battery out, and that part should be fairly easy to do, as the battery is not glued down to the phone's body in a number of places, even though some adhesive is applied.

At that point, you will need to remove eight screws that are holding the plastic that is covering the motherboard. On that plastic bracket, you will notice some gold contacts, well, those are used for the NFC to work. Once you remove that piece of plastic, you will be able to see the alert slider, and the way it works, while the camera sensors, and the motherboard will be revealed. You need to unplug various connectors and the phone's cameras in order to get the motherboard out, and also remove the remaining silver screen that is placed in the middle of the motherboard. On top of that, make sure to remove the SIM card tray on the side. At that point, you will be able to access the phone's earpiece, and a microphone. If you remove the bottom plastic by removing seven screws, you will uncover the phone's vibrating motor, USB-C port, loudspeaker, and the in-display fingerprint scanning hardware. There's not much room left on the bottom, OnePlus is utilizing more or less everything they could get down there, which kind of explains the removal of the 3.5mm headphone jack.

Background: JerryRigEverything already durability-tested the OnePlus 6T, while he also peeled off the sticker / color from the back of the phone's back cover. Both of those procedures were shown in videos, just like this one. OnePlus actually introduced the OnePlus 6T quite recently, less than two weeks ago. The device was announced in two variants initially, Mirror Black and Midnight Black, while the third model, the Thunder Purple, arrived a bit later, during the phone's official launch in China. The Thunder Purple variant of the device will remain exclusive to China, which is something that OnePlus confirmed recently. The OnePlus 6T is quite similar to its sibling, the OnePlus 6, as the two phones sport a similar build, have the same processor, same camera, same RAM, and even the same display, even though the OnePlus 6T's panel is larger and narrower. The OnePlus 6T, unlike the OnePlus 6, sports an in-display fingerprint scanner, and a much smaller notch, but it does not have a 3.5mm headphone jack, nor an LED notification light. The device is fueled by the Snapdragon 845 64-bit octa-core SoC, comes in 6GB and 8GB RAM variants, while it sports a 6.41-inch fullHD+ Optic AMOLED display. The OnePlus 6T also included a 3,700mAh battery on the inside, a battery pack that is considerably larger than the OnePlus 6's 3,300mAh unit. OnePlus' proprietary fast charging is included in the package as well, though it's no longer called 'Dash Charge'. The device sports a similar price tag as its predecessor, though variants in which it is available are a bit different than those the OnePlus 6 was offered in.

Impact: The OnePlus 6T is one of the best value smartphones out there, and for the first time ever OnePlus has partnered up with one of the US carriers in order to sell the phone in the US, T-Mobile is the carrier in question. It remains to be seen will that improve the phone's sales numbers, and by how much, as this handset is quite similar to the OnePlus 6, but on the other hand, it's better-looking, and finally available through a carrier in the US. Having said that, it seems like OnePlus is planning to announce three smartphones next year, two devices they usually do (the OnePlus 7 and 7T), while a third phone will be a 5G-enabled device, the company's very first 5G-enabled phones. The company's exec did say that the company's first 5G-enabled device is coming early next year, and that it will not be a part of the company's usual release cycle, which suggests it may launch prior to the OnePlus 7, and have a completely different name, but we'll see what will happen.