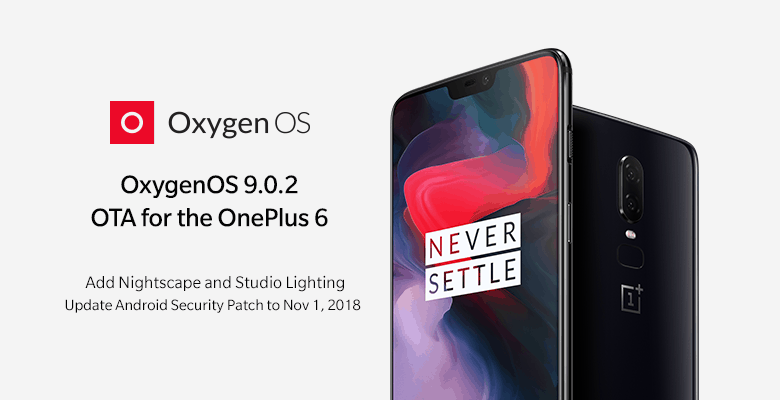 OxygenOS 9.0.2 has started rolling out to the OnePlus 6, and this update brings OnePlus 6T features to the OnePlus 6. This is a stable update, and it follows the OxygenOS Open Beta 6 update which arrived a couple of days ago, the changelog is basically the same. This update arrives only a couple of days after the OnePlus 6T announcement, and even before the OnePlus 6T became official on a global scale. Having said that, the OxygenOS 9.0.02 update changelog has a bunch of entries, and the first two features that are worth noting are Nightscape and Studio Lighting, both of which have been presented on the OnePlus 6T. Nightscape is basically a dedicated night mode for the device that has been added to the camera, and it’s meant to be used when you can get the image you like using auto mode in extremely low light conditions. Studio Lighting, on the other hand, is meant to enhance face contour in images.

On top of these two camera additions, the OxygenOS 9.0.2 update also adds brand new navigation gestures to the OnePlus 6, in other words, it keeps the gesture-based navigation that the company had, but it optimizes them. Those gestures are better executed now, while new animations have been added. On top of that, the company has added a gesture for quick app switching (switching between two last apps that you’ve used), all you have to do is start swiping up, and then swipe right while holding your finger on the display. In addition to that, an option to quickly call upon Google Assistant is also here now, you can hold the power / lock button for 0.5 seconds in order to do that, though that can be disabled in settings, of course. This update brings a new UI for ‘About Phone’, and it also brings Android security patch for November 2018. General bug fixes and improvements are also included in OxygenOS 9.0.2, says OnePlus.

Background: The OnePlus 6T got announced earlier this week in New York, and the device actually comes with a number of identical internals to the OnePlus 6, including all of its cameras, so it’s not exactly surprising that the OnePlus 6 received all the camera features that are included on the OnePlus 6T. The two devices are also quite similar in terms of build, even though they look a bit different, as the OnePlus 6T comes with a much smaller notch, and no rear-facing fingerprint scanner, instead it includes an in-display fingerprint scanner. The OnePlus 6 was introduced back in May, so it has been 5 months since its arrival, which explains why the two phones are so similar. The OnePlus 6 and 6T also have the same processor, RAM setups, display (different size though), and so on.