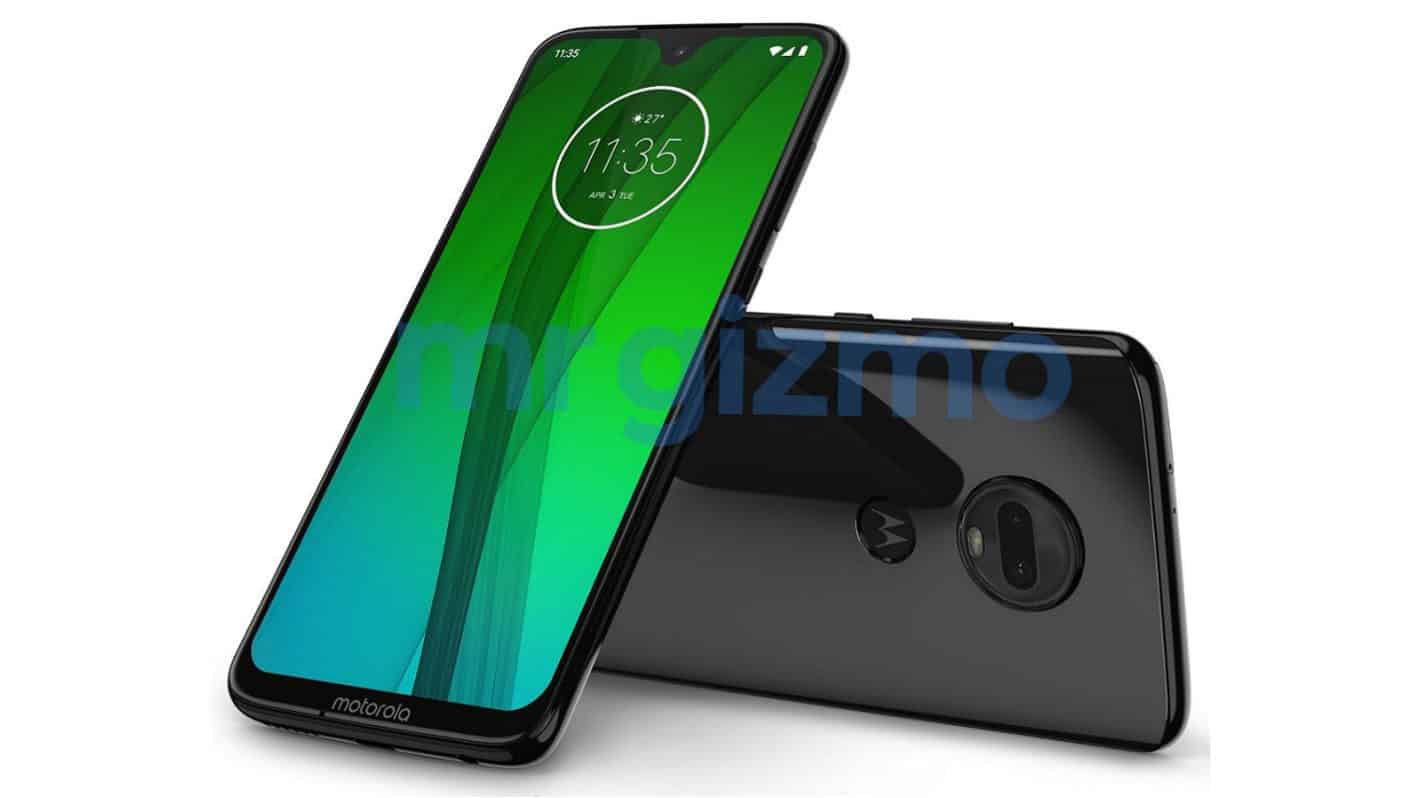 A Motorola-made device that's believed to be the Moto G7 was certified by the United States Federal Communications Commission earlier this month, with the regulatory agency revealing a number of specs indicative of a mid-range Android smartphone. As first spotted by Nashville Chatter, the device is 156.86 x 75.4mm in size and has a 166.9 mm screen diagonal, with those dimensions suggesting a notched 6.57-inch display surrounded by minimal bezels and an elongated 19:9 aspect ratio. Shortly following that development, the handset also ended up being leaked online as part of a seemingly official press render, revealing a waterdrop-style notch and a dual-camera setup on the back.

The image that can be seen above also confirms the existence of a dual-LED flash and a glossy black variant of the device, in addition to revealing a lack of a physical home button. The device is still likely to feature a fingerprint scanner and presumably has one integrated into the batwing logo on the back. Its overall design is slightly rounded and the rear-facing camera module protrudes from the back by some margin, though the handset is still somewhat similar to Motorola's other recent Android smartphones, primarily due to its use of metal and glass.

The new smartphone lineup will be labeled by the model number XT1965, with the XT1965-1 and XT1965-2 being scheduled for a release in North and South America, respectively. The Lenovo-owned original equipment manufacturer will be releasing both a single- and dual-SIM variants of the Moto G7, with both being expected to feature Qualcomm's Snapdragon 660 chip, 4GB of RAM, and 64GB of storage space. While the memory configuration of the Moto G7 is comparable to that of its direct predecessor, Motorola's system-on-chip of choice suggests the company will be looking to position the upcoming device in the upper mid-range segment of the market. The change is significant and indicative of a more general product strategy shift that may see the company cut down on the number of models it releases on the verge between the entry-level and mid-range market in the near future. While the Moto G6 Plus also featured a Snapdragon 600-series chip, the regular Moto G6 used Qualcomm's  Snapdragon 450, a low-end piece of silicon.

No Motorola smartphone to date used the Snapdragon 660, a popular choice in the middle of the smartphone price bracket. The upcoming series may also include models known as the XT1952 and XT1955, both of which were spotted in other certification databases several weeks back. The former has been listed with a 3,000mAh battery, though it's presently unclear how closely related they are to the devices that have now been certified by the FCC. The Moto G7 Plus is expected to utilize a 3,500mAh cell with fast charging support. The latest certification also confirms the presence of NFC support which was also part of this year's Moto G6 series.

Background: While Lenovo's smartphone business in general isn't doing great right now, Motorola itself has been growing in a steady manner over the last several years and remains one of the fastest-growing unlocked brands in North America. Following a leadership change from earlier this year, Motorola said it will be cutting down on the number of smartphones it releases on an annual basis as it concluded its existing strategy resulted in a number of underperforming models too similar to one another.

The company's current approach to product development also saw it exist the flagship market this year as it decided against releasing a successor to the 2017 Moto Z2 Force. Instead, Lenovo's subsidiary invested in a number of niche features such as 5G compatibility, with the recently released Moto Z3 debuting as the first 5G-upgradeable handset in the world. Motorola also remains committed to its modular ecosystem, having already confirmed its Moto Mods will continue to exist beyond the Moto Z3 series. Furthermore, Motorola is presently rumored to be working on a phone-to-PC solution comparable to Samsung's DeX and Huawei's P20 and Mate 20 tech allowing the phones to be connected to external monitors for a desktop-like computing experience.

The company's existing product release cycle suggests the Moto G7 series will be announced in early 2019, most likely at the next iteration of Mobile World Congress which is starting in late February in Barcelona, Spain. The new handsets will almost certainly run a custom implementation of Android 9 Pie, with Motorola having an established track record with relatively lightweight takes on Google's mobile operating system that are somewhat similar to stock Android. While it's presently unclear whether the FCC-certified devices are the lineup's base models or the absolute best Motorola will have to offer, recent rumors pointed to four variants of the Moto G7 being in the works.

The latest leak is in line with some previous depiction of the Moto G7, with one of them suggesting Motorola is also working on a glossy red version of the device. A silver Moto G7 model is also rumored to be coming, with that particular color being a staple of the company's contemporary Android smartphone lineups. Not all color variants are expected to be available globally, as indicated by the manufacturer's existing product practices. Previous rumors pointed to the possibility of Qi-based wireless charging being part of the package, together with 16- and 5-megapixel rear cameras. The front-facing sensor is said to be a 12-megapixel affair with real-time face mask support.

Impact: Motorola appears to be going all-in on its bezel-less design language with the next generation Moto G-series devices. Coupled with a move to the more capable Snapdragon 660, the Moto G7 series should represent the pinnacle of the company's efforts in the mid-range segment of the market. Should the Lenovo-owned phone maker be able to continue with its aggressive pricing strategy in spite of those annual upgrades, it may have another winner on its hands and be able to compete even in the world's most competitive markets such as the U.S. and India. Whether that same product philosophy trickles down to Motorola's entry-level devices remains to be seen, though that's a highly probable scenario in the long term.

Advertisement
Trusted By Millions
Independent, Expert Android News You Can Trust, Since 2010
Publishing More Android Than Anyone Else
27
Today
88
This Week
580
This Month
3092
This Year
104571
All Time
Advertisement