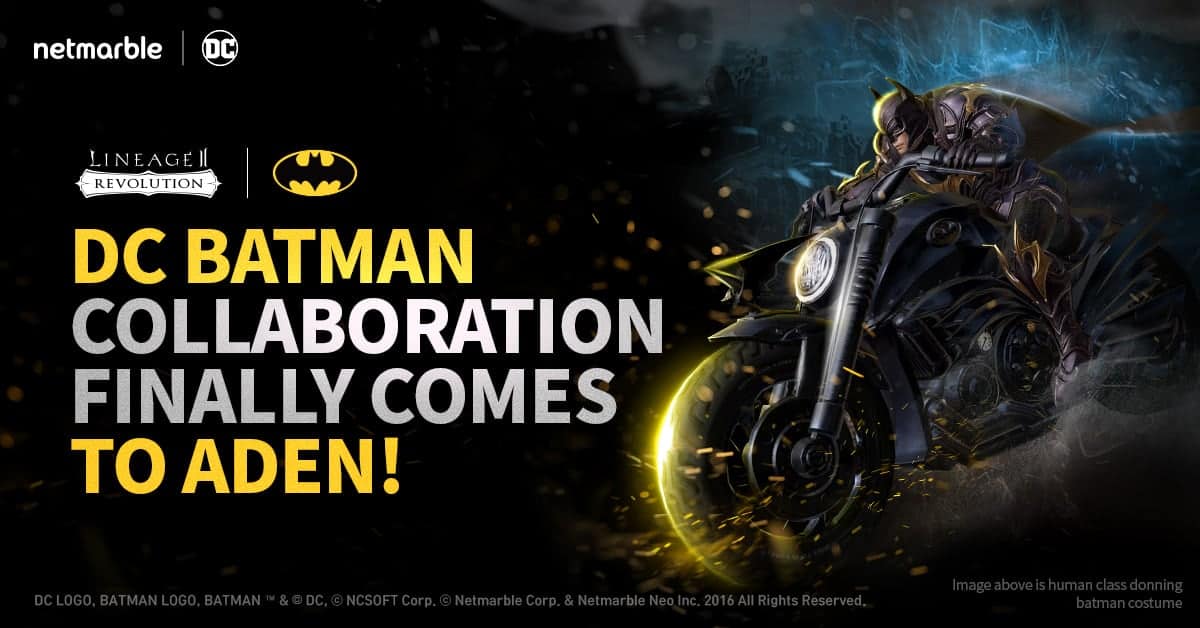 Some of the most famous heroes, villains and gadgets from DC’s beloved Batman universe are coming to mobile MMORPG Lineage 2: Revolution. The fun begins with a new obtainable costume and mount for each race. Batman villains will begin showing up in the Temporal Rift dungeon “Castle of Terror” for a limited time, as well as out in the world at large. A new Artifacts feature is also rolling out, which will feature 16 different DC elements in-game. The event is on as of this writing, with no end date announced at this time.

Background: Having famous Batman villains lurking around is great, but it becomes even more fun to fight them when you can dress up as their in-universe friends and foes. Humans can dress as Batman, dark elves can don a Joker cosplay, elves can put on Catwoman’s iconic leather suit, dwarves can become Harley Quinn, and finally, orcs can become Mr. Freeze. Best of all, each race’s new costume is accompanied by a different themed mount to go with the character, such as a Batcycle for humans. Heading to the Castle of Terror in the Temporal Rift area will allow you to pick a fight with Bane and Poison Ivy. The Riddler, meanwhile, will appear out in the world as a field boss, and Scarecrow will be available as a World Boss. Each of these new boss characters has their own entry in the Monster Codex that shows a little bit of extra background info and other data, as well as their own Soul Crystals. Poison Ivy’s crystal is for Penetration, Bane’s is for Attack, Scarecrow’s is for Defense, and The Riddler’s crystal will help you boost your HP. It’s worth noting that Scarecrow and The Riddler aren’t available just yet; Netmarble will be rolling them out some time in the near future.

Impact: Lineage 2: Revolution is one of the prettiest and most celebrated MMORPGs on the Android gaming scene, and it’s getting ready to celebrate its first anniversary. Originally released on December 14, 2016 in closed beta form, the game finally made its way to worldwide audiences on November 15, 2017. This event is not just a great way to mark the game’s birthday, but will also help attract new players. Even beyond the realm of comic fans, superhero fans and even movie buffs, Batman is an extremely well-known property, and bringing that universe in contact with a game as visually striking as Lineage 2: Revolution is bound to impress some people who would otherwise not give the game a second look. Whether they stay, of course, is all up to how much they enjoy the larger game. There’s a ton to do, and you can make the game as engaging or as autonomous as you want, a mechanic that’s a bit divisive in the mobile gaming community. Still, this helps the game to appeal to a wide variety of players of all walks of life and skill levels. Therefore, it’s quite likely that this event will bring a huge influx of new players across all servers worldwide.