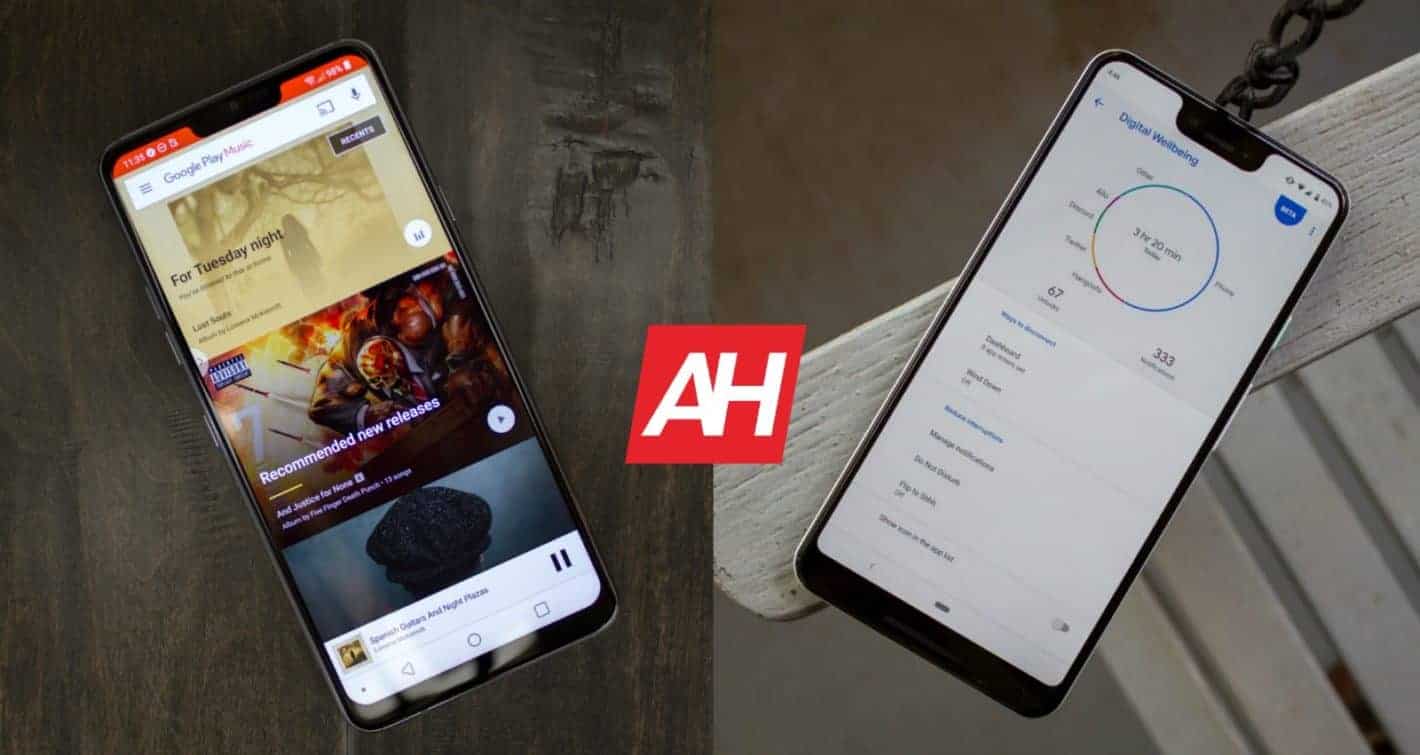 Do we have a good one for you today – the LG G7 ThinQ takes on the Google Pixel 3 XL. Here we have two smartphones going after different crowds, which is often the case when a Pixel device is concerned. As Pixel phones are typically more stock-like and feature far less features than you might find on other smartphones. The Pixel 3 XL is a well-built phone that employs an OLED QHD+ display, and packs the best processor and GPU that's available, but it has only 4GB of RAM, no expandable storage, and a single main camera (although it does feature dual front-facing-cameras), and no 3.5mm headphone jack. The LG G7 ThinQ is designed for those that want more than pure vanilla Android as well as extra features and expandable storage. The G7 ThinQ sports a notched QHD+ LCD display, packs the same processor/GPU, expandable storage, dual cameras, a 3.5mm headphone jack, Boombox speaker, facial/voice recognition, and is MIL-STD-810G compliant.

These two devices may be far apart on their Android OS and camera stances, but they do have many features that are similar. For starters, the displays are about the same size, both use the QHD+ resolution, and a newer aspect ratio (19.5:9 vs 18.5:9), and use Gorilla Glass 5 for protection. Both use the same processor and GPU, as well as 4GB of base RAM and 64GB of base storage – expandable on the LG G7 and non-expandable on the Pixel 3 XL. The LG G7 has a single 8-megapixel FFC while the Pixel 3 XL uses a dual FFC. The batteries are both non-removable and both offer fast charging and wireless charging. Even the physical size is almost the same with the Pixel 3 XL weighing in at 22 grams heavier that the LG G7. They both have the usual suspects – LTE, Wi-Fi, Bluetooth v5.0, Google Pay, and a 3.1 USB Type-C port for charging and data transfer. They both are IP68-certified for water/dust resistance, feature upgraded speakers, rear-mounted fingerprint sensor, Google Assistant, and front/back Gorilla Glass 5.

Please take a careful look at the detailed specifications comparison chart below and there you will see just how these two high-end Android smartphones stack up against each other. Which one is the better purchase by offering the most technology for the least amount of money? This question and more we will hope to answer in this comparison.

LG is a company that is not afraid to take risks and do unorthodox things – look at the LG G5. Hence it was no surprise when LG took the LG G6, changed it to LG G7 and added the 'ThinQ' branding to the name, and then updated the technology, and increased a few items to present us with the new LG G7 ThinQ. The increased display size changed to a 19.5:9 aspect ratio to give it a more modern look. LG still adheres to the vanishing LCD technology and even took a slice of Apple's notch out of the display, but does include an Always on Display (AoD). LG changed the LG G7 ThinQ's cameras by increasing the megapixels but then lowering the wider-angled lens on the secondary main camera. Gorilla Glass 5 is used all around for protection.

The LG G7 ThinQ LCD display size increased from 5.7-inches to 6.1-inches, as well updated the aspect ratio from 18:9 to 19.5:9. This provides a slightly taller and narrower display for a better viewing experience and for when using multi-windows. LG's FullVision – its answer to Samsung's Infinity Display – is an LCD setup with its QHD+ resolution of 3120 x 1440 pixels and a density of 564 PPI, with an added notch. The LG G7 also uses the company's version of an AoD display by utilizing a floating, bar-like display. For better outdoor viewing, the new display can go up in brightness to 1,000 nits, but only for three minutes before dropping back down to save battery.

LG picked the best processor/GPU out during 2018, which happens to be the Snapdragon 845 octa-core SoC clocked at 2.8 GHz, coupled with an Adreno 630 for outstanding graphics. This is along with 4GB of base RAM and 64GB of expandable base internal storage. Certain areas will sell a 6GB model with 128GB of expandable internal storage. The LG G7 ThinQ will run fast and smooth with the 4GB of RAM, but 6GB makes for better multitasking. LG decreased the battery capacity down to only a 3,000 mAh. When you need a charge, LG gives you Quick Charge 3.0 and wireless charging.

Most manufacturers are adding multiple cameras to their flagship devices and the LG G7 ThinQ is no exception. Besides sporting dual cameras, LG updated the camera software. The first main camera sports a 16-megapixel sensor with a large f/1.6 aperture, with laser and PDAF, OIS, and an LED flash. The secondary main camera is also 16-megapixels with a smaller f/1.9 aperture and a slightly wider-angle making it good for landscape shots. LG increased the FFC from 5-megapixels with a f/2.2 aperture to an 8-megapixel and a better f/1.9 aperture for great selfies and video chatting.

LG does make some unusual decisions when it comes to its smartphone design. For instance, was it necessary for LG to add a notch to the display? What about sticking with the LCD display technology, or removing the on/off button from the rear fingerprint sensor? Let's not forget as to why LG made the wide-angle lens less wide?  LG was kind enough, however, to keep the 3.5mm headphone jack and improve the sound by using the vibrations of the inner chambers of the device. The LG G7 carries the usual suspects – Wi-Fi, Bluetooth v5.0, NFC, Google Pay, and an USB 3.1 Type-C port for charging and data transfer. The LG G7 ThinQ measures 153.2 x 71.9 x 7.9 mm, weighs in at 162 grams and comes in Platinum Gray, Aurora Black, Moroccan Blue, Raspberry Rose. It will cost you about $750 for the 64GB model.

It is no secret that Google would like to sell more of its Pixel series of smartphones. However, the company is going to have to drop the prices or add some more pizzazz to its devices – Google needs to offer more features than just the fastest updates. A number of users are unlikely to know about cameras, lenses, processors, or displays, other than their size, but they will likely care about pricing. Google needs to add more RAM, expandable storage, and include smaller bezels. The Pixel 3 XL is a nice looking phone, but it's not in the same stratosphere as the latest from Samsung with an Infinity Display. There was a time when the Pixel camera was renowned for its picture taking abilities, and while it still takes a great photo, the other manufacturers have caught up. The Pixel 3 XL still uses a single main camera, but offers a stranger dual FFC. Google uses Gorilla 5 glass for the front and back of the smartphone which allows the option for wireless charging. The Google Pixel 3 XL does come with support for a number of the company's features, such as Google Pay, Google Assistant, Google Lens, and free access to Google Photos' premier features. The Pixel 3 XL line also offers an improved Active Edge, Playground, and Smart Lock, as well as IP68 dust and water-resistance, and front-facing stereo speakers. You can buy it unlocked to work on any major U.S. carrier, but Verizon is still the exclusive dealer of the Pixel 3 series phones.

The Pixel 3 XL still uses the OLED display technology for vivid colors and the blackest of blacks. Google increased the display from 6.0-inches to 6.3-inches with a resolution of 2960 x 1440 and a density of 523 PPI. The Pixel 3 XL display uses an 18.5:9 aspect ratio – this gives you a narrower and taller display, but it does make it more conducive to movies, videos, and games. If you do a lot of multi-window tasking, this ratio will give you two perfect squares. Google includes an AoD that saves battery life, but also makes it easier to check your notifications. Gorilla Glass 5 protects the display from damage.

The Snapdragon 845 octa-core processor and the Adreno 630 graphics processor can be found in any 2018 flagship. In the Pixel 3 XL, the SD845 is clocked at 2.5 GHz and paired with that Adreno 630 for outstanding graphics. Google only included 4GB of RAM which could take its toll on heavy multitasking. The internal storage is not expandable and starts out at 64GB, with an optional variant featuring 128GB. Considering the pricing, more RAM and memory should be included. Google decreased the battery size from a 3,520 mAh capacity in the Pixel 2 XL to a 3,430 mAh capacity in the Pixel 3 XL, but added quick wireless charging.

Pixel is known for a great photo experience and the Pixel 3 series will not disappoint – and this is with just one lens. Certainly, other manufacturers have caught up to Pixel's standards and have started using multiple cameras and optical zoom. The Pixel 3 XL is sticking to just one 12.2-megapixel main camera with an aperture of f/1.8, OIS, laser and PDAF, a dual-LED flash, and auto-HDR. The one place Google did change the camera area up is by including a dual 8-megapixel FFC with an aperture of f/1.8, PDAF, and auto-HDR, and the other with an ultra-wide sensor sporting an f/2.2 aperture and no autofocus. Of course, new software was included that added more features.

Google did increase the display size, added the new aspect ratio, and kept the QHD+ resolution, but decided to add a notch. Google was able to add wireless charging once the back of the device was covered with Gorilla Glass 5. The camera offers better software and features this year with an improved Google Camera Lens and Active Edge, making the features more useful. The 3.5mm headphone jack is no longer on board, but it does offer very good sounding stereo speakers. Being a Google phone it will come with the newest Android 9 Pie and buyers of the Pixel 3 XL can expect a lightweight version of Android and the fastest updates.

I have no choice but to pick the LG G7 ThinQ as the winner of this comparison. The LG G7 does use the lesser LCD display technology and you won't get the fastest Android updates. However, you get the same processor/GPU, the same RAM, expandable memory, dual main cameras, a Boombox speaker, a 3.5mm headphone jack, facial/voice recognition, and, MIL-STD-810G for about $180 cheaper than the Pixel 3 XL. The Google Pixel 3 XL is definitely the best Pixel that was ever made, but when it comes to development Google seems to be dragging its feet. The company continually raises the prices of its smartphones, but lag far behind many other flagship phones when it comes to features. Google is taking away a buyer's choice – no headphone jack, no expandable memory, etc. It is a big price to pay for getting the newest Android OS.