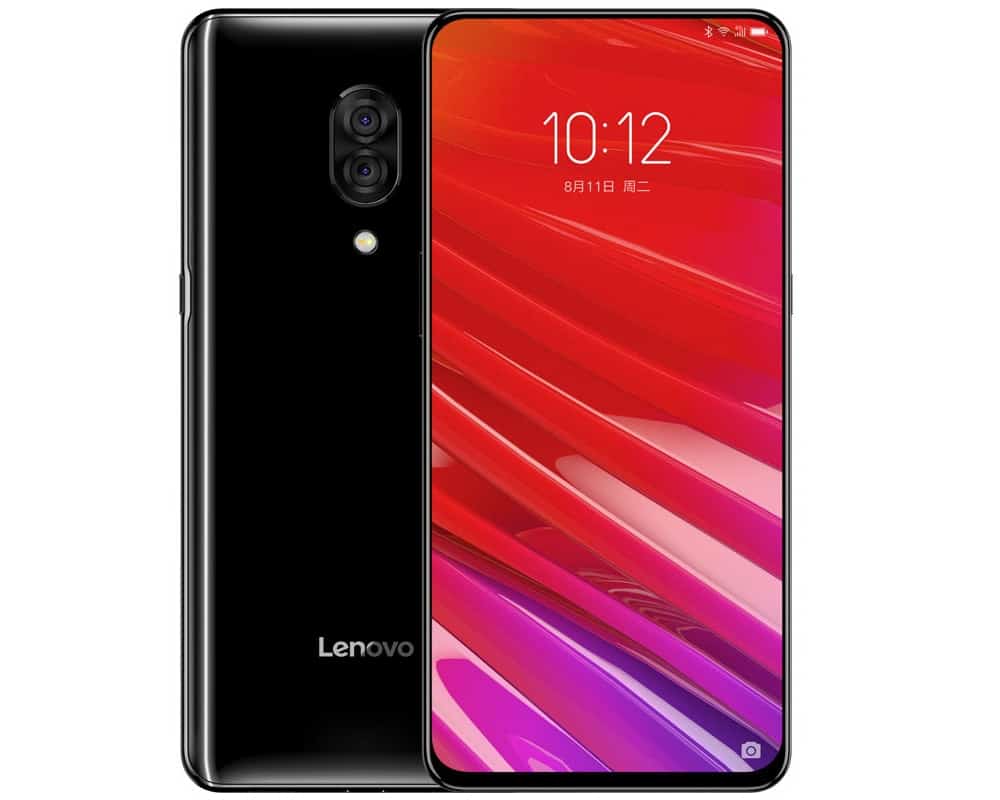 The Lenovo Z5 Pro has just managed to become a smartphone with the highest screen-to-body ratio in the world, at least according to Lenovo’s official information. The Lenovo Z5 Pro is the company’s new mid-range smartphone, well, upper-mid-range smartphone, which is not only almost completely bezel-less, but it also comes with a sliding camera mechanism that we’ve seen on several other phones out there. The Lenovo Z5 Pro is made out of metal and glass, while it sports two vertically-aligned cameras on the back, and an LED flash below them. Lenovo’s logo is included on the back of this phone as well, while the device’s display sports rounded corners. The only bezel that you will notice on this phone lies below the display, as the device has a really thin ‘chin’ down there. The back of the device is curved on the sides, and the phone’s main cameras on the back do protrude a bit. The power / lock key is included on the right-hand side of the device, while the volume up and down buttons sit on the left side.

This device also comes with a rather compelling spec sheet, even though it’s technically a mid-range phone. The Lenovo Z5 Pro sports a 6.39-inch fullHD+ (2340 x 1080) Super AMOLED display with a 19.5:9 display aspect ratio, and Corning’s Gorilla Glass protection, though the manufacturer did not clarify which version of Gorilla Glass is applied here. Qualcomm’s Snapdragon 710 64-bit octa-core processor fuels this phone, and as some of you probably already know, that is a 10nm processor, and the most powerful mid-range offering from Qualcomm. The device includes 6GB of RAM and 64GB / 128GB of storage, while two SIM card slots are also included in the package. Android 8.1 Oreo comes pre-installed on the phone, along with Lenovo’s ZUI 10 skin. 16-megapixel (Sony’s IMX519 sensor, f/1.8 aperture) and 24-megapixel (Sony’s IMX576 sensor, f/1.8 aperture) cameras are included on the back of the Lenovo Z5 Pro, while you will find 16-megapixel (f/2.2 aperture) and 8-megapixel (IR camera for face unlock) cameras on the front side of the phone. The phone’s front-facing cameras slide out from the back of the display, which is extremely similar to the setup which we’ve seen on the Xiaomi Mi MIX 3, though it’s still unclear whether you need to manually slide the phone in order to achieve this (like on the Mi MIX 3), or does the phone do it automatically when you switch to its front-facing cameras in the camera app… even though it’s probably the former.

The Lenovo Z5 Pro does sport an in-display fingerprint scanner, while its audio has been tuned by Dolby Atmos. The device does not include a 3.5mm headphone jack, but it does come with a Type-C USB port on the bottom. A 3,350mAh battery is also included in the package, while the device packs in Bluetooth 5 and an NFC chip. The Lenovo Z5 Pro got introduced in a Black color only, and this phone got introduced in China. For the time being, it’s not clear if the device will reach other markets, but it’s possible, though it may sport a different name outside of Lenovo’s homeland. The phone’s 6GB RAM variant with 64GB of storage is priced at 1,998 Yuan ($287) in China, while the 6GB RAM + 128GB storage model costs 2,298 Yuan ($330). The phone will become available for purchase on November 11.

Impact: It’s a bit odd that Lenovo did not include a flagship processor inside of this phone, along with more powerful cameras, as this is in every other way a flagship smartphone. Not only does it have an in-display fingerprint scanner, and the highest screen-to-body ratio in the world, but it also looks quite premium on top of that. On the other hand, this is, perhaps, a great decision by Lenovo, as the Lenovo Z5 Pro is much more affordable than the OnePlus 6T, and it’s also noticeably affordable than the Poco F1, for example. Truth be said, this phone is aiming at a completely different set of consumers than either the OnePlus 6T and Poco F1, but still… it’s a great price tag, as the phone starts at only $287 in China, and if you don’t need the absolute best cameras (not to say that the ones on the Lenovo Z5 Pro are bad), and a flagship processor, this phone does seem to be quite compelling. If the company does plan to release this handset in more markets around the world, we’ll probably have to wait another month or two to see any motion in that regard, but Lenovo has been rather quiet when it comes to smartphone launches lately, especially smartphone launches outside of its homeland, and especially when it comes to mid-range and high-end devices. If the company opts to release this phone in other markets, and on top of that manages to keep its price tag relatively close to the phone’s price tag in China, this phone could end up being quite popular, as it really does have a lot to offer at that price tag, at least on paper, as we still did not get a chance to use it, so we can't really say how good or bad is it in practice.