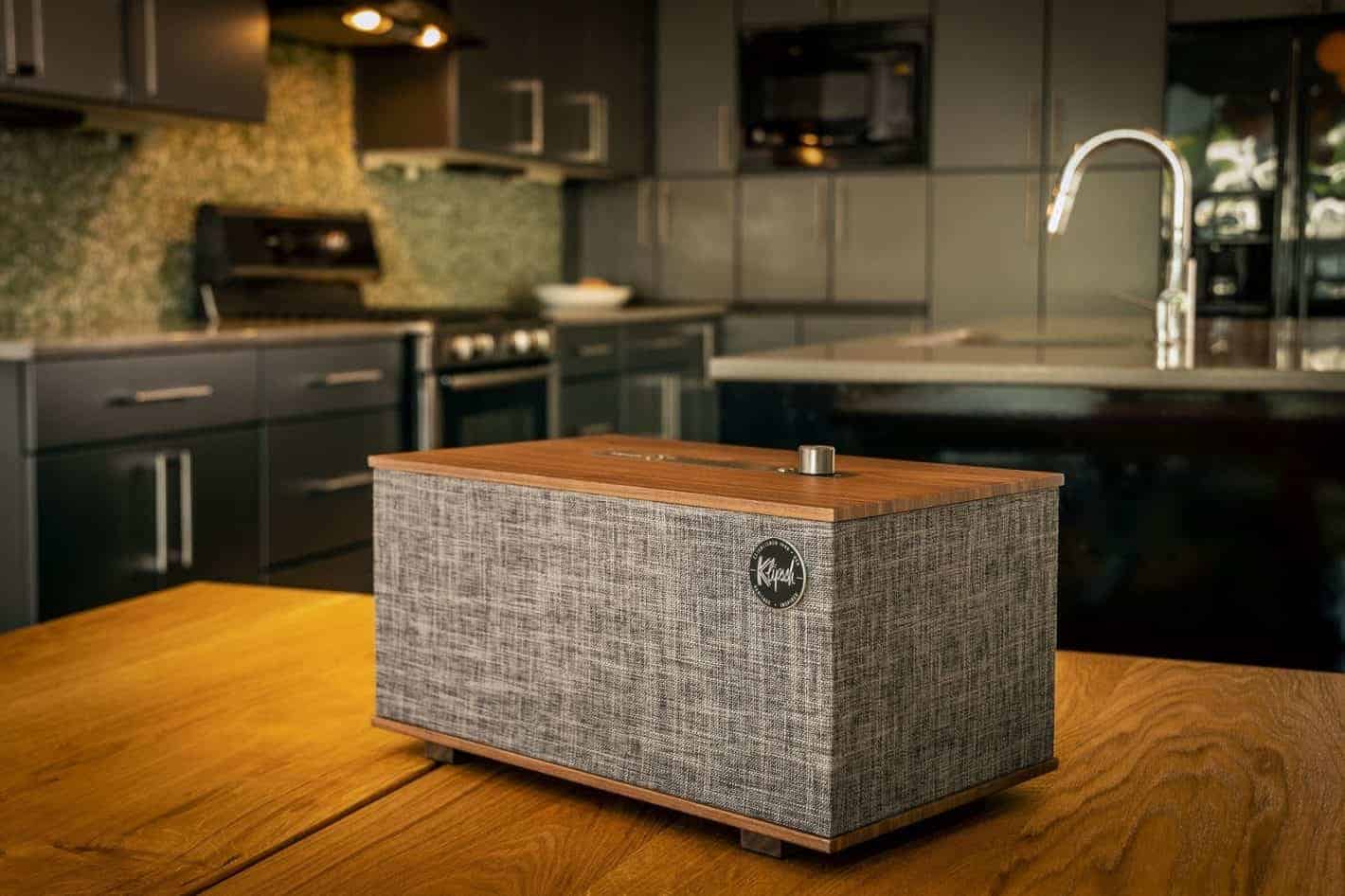 Klipsch Audio has now announced the launch of a new Google Assistant-enabled Bluetooth speaker, The Three with Google Assistant. This is the company’s latest addition to its Heritage wireless tabletop speaker lineup and is now available to buy from a variety of retailers online, including the company’s own web store. The Klipsch The Three speaker arrives with a $499 retail price in the US, and £450 for buyers in the UK.

Unlike the wealth of virtual assistant speakers that are now available, The Three is not necessarily designed to be affordable or for on-the-go use. Instead, this speaker focuses much more on the design and providing a unit that is best served as a stationary home unit. One which buyers can utilize as a permanent virtual assistant that can provide feedback to questions asked, and control compatible smart products in the home. All while offering the type of sound quality and design that’s in line with the company’s other products. Resulting in a high-end smart speaker that blends design traits of the past with features associated with more modern speakers.

Background: Klipsch is a brand known for its audio-based products, and technically speaking, its The Three speaker is not a new product as it has been available to buy since early 2017 but without the added smarts found in this version. However, during CES 2018 the company announced it plans to add Google Assistant support to its Heritage line with The Three and The One destined to be the first products from the company to arrive boasting the support. While it has taken some time for The Three with Google Assistant to arrive, that’s what has now been announced today. This also now means The Three with Google Assistant has now hit the market before The One with Google Assistant, making it the best option right now for those who prefer the Klipsch way of doing things while also looking to make use of the added assistant support.

With the original model in mind, the new version is is more of an updated device than a brand-new product and that means a number of the core aspects have not changed that much. Although to buyers it will certainly feel like a new product as the original The Three model was more of a traditional speaker that while providing the option to connect a smartphone via Bluetooth, could not provide the level of smarts now on offer with this model thanks to the built-in Google Assistant. In addition to the added smarts, and while the new The Three model sports a fresher and more modern look, it still is very representative of the original model with the same box-like design in use, which primarily relies on a retro feel padded out by an increased use of wood and metal. Resulting in what the company refers to as a “mid-century modern design.”

Moving on from the design and this speaker comes equipped with two 2.25-inch full range drivers along with a 5.25-inch long-throw subwoofer. All of which culminates in a total power output of 80-watts and a frequency response range of 45Hz – 20kHz. There’s no internal battery with this speaker and therefore it does require constant power from a wall socket, although Bluetooth is included allowing users to stream music directly to the speaker, as well as the option to connect the speaker to other Google Assistant-enabled speakers, and in the process benefit from the use of multi-room support for a richer room-filling sound. This is all of course in addition to the usual benefits associated with Google Assistant, including the option to manage and control various smart home products.

Impact: The new The Three speaker is certainly not going to be for everyone as this is a fairly pricey speaker for what it is. Especially considering it’s designed as a stationary unit and does offer any portable or additional durability features. But that’s sort of the point with this speaker as it’s not designed to cater to those looking for a speaker they can take to the pool or thrown in their bag when they are heading out. Instead, The Three is all about the quality and this permeates all areas of the speaker including the design and the sound. On the latter point, the sound quality, in spite of its size The Three is designed to be a powerful speaker and the overall output eclipses many other speakers that are similar in size. What’s more, that sound is not just loud, but also more finely tuned by the company to offer an enhanced quality overall (including support for high resolution audio) and greater bass. These internals are largely the same as what’s on offer with the original model and so existing owners of The Three will already know what to expect when it comes to sound quality.

To put the high price into perspective, the original and by comparison dumber version of The Three is still sold by the company and is currently priced at the exact same $499 level. So when you take that into consideration, you are getting the same build and sound quality offered by the company’s older solution but with a far greater degree of functionality thanks to the inclusion of Google Assistant, it becomes clear that in spire of the high price, this model does offer greater value compared to the existing model as you’re literally getting Google Assistant support for free. For those that are still put off by the price, it might be worth holding off for the company’s The One to gain its Google Assistant revamp as that is positioned as a more affordable option from the company and does feature a battery. Although, for what it is The One is still an expensive speaker in general, and the impact of its more affordable price is a reduction in the size of the subwoofer and a lesser power output overall. So those wanting the best sound quality will want to go with the The Three with Google Assistant.