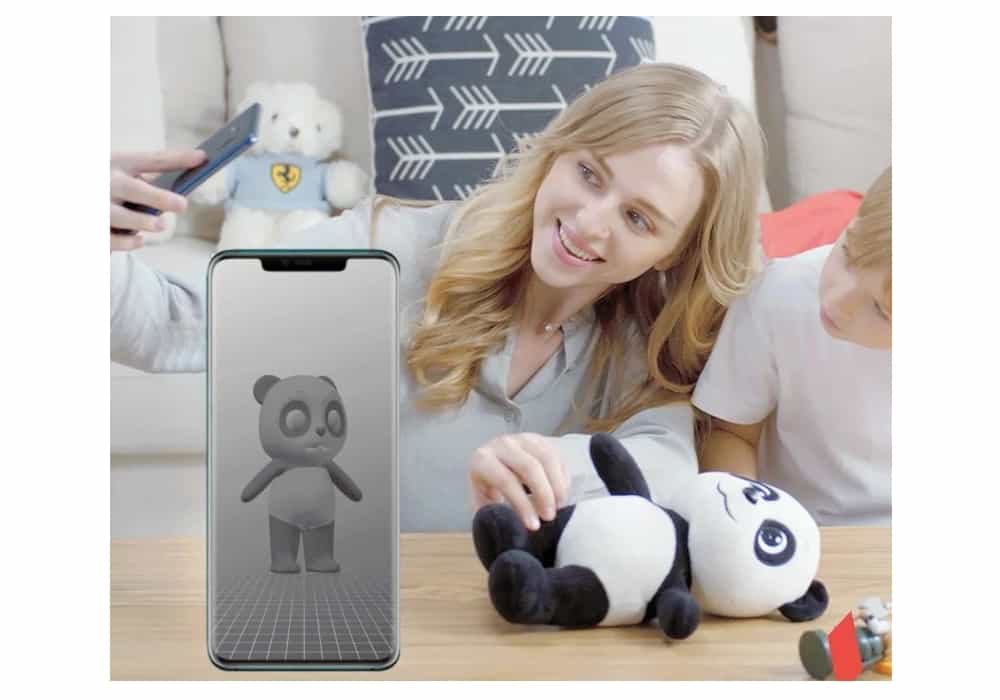 Huawei has just announced a new application for creating AR content, and it’s called “3D Moderator”. This application is compatible only with the all-new Mate 20 Pro and Mate 20 RS Porsche Design smartphones, as those are the only smartphones that currently support AI-based and AR-based functions that are necessary in order to get this application to work as it should, and on top of that they have the necessary hardware in order to bring objects to life. This application enables Mate 20 Pro and Mate 20 RS Porsche Design users to create AR interactive 3D elements, also known as “AI Live Model” or “3D Live Object”. Now, as it’s explained, such functions are possible because of the array of front-facing sensors, including a 24-megapixel RGB camera sensor, a dot project, flood illuminator, proximity sensor, ambient light sensor, and an IR camera. Now, those sensors, in combination with AI-based algorithms, can scan some subjects, such as toys, and simulate some actions. For example, if a doll gets scanned, limb movements can be simulated using this app on the Mate 20 Pro / Mate 20 RS Porsche Design. Huawei says that an object that gets scanned should be 15-25cm in length, and that its parts should be at least 5cm in diameter. Users can choose from a number of actions when it comes to animation effects, including ballet, happy walking, happy jumping, cross-stepping, easy running, kung fu, and so on. That way, you can get some objects actually dance in AR, for example, using this application. This is actually quite similar to Google’s Playground AR app, to a degree. The 3D Moderator app is not available via the Play Store, though, you can get it via Huawei’s application market only.

Background: This app is available for the Mate 20 Pro and Mate 20 RS Porsche Design only due to their sensors, which no other Huawei-branded phone has, not all of them. On top of that, this application is developed so that it works in collaboration with the company’s new Kirin 980 64-bit octa-core processor, which comes with two NPU chips, and one of them is dedicated to “vast AI computing”, while the other one tackles “specific tasks”. Huawei actually said that this setup can boost image recognition performance 120-percent, so that chip plays a huge role in creating AR content as well. The Huawei Mate 20 series devices were introduced last month, and the company actually introduced four devices, the Huawei Mate 20, Mate 20 Pro, Mate 20 RS Porsche Design, and Mate 20 X, though the Mate 20 and Mate 20 X do not have all the necessary sensors on the front, even though they’re fueled by the same processor as the Mate 20 Pro and Mate 20 RS Porsche Design. The Huawei Mate 20 series is made out of metal and glass, and all of those phones are quite large, actually, the Mate 20 Pro is the smallest one with a 6.39-inch display, while the Mate 20 X is the largest one with a 7.2-inch display.

Impact: Some people would probably say that such features are more gimmicks than anything else, and truth be said, what the “3D Moderator” ap can do is not particularly useful, but it’s rather interesting nonetheless. The functionality of that app is quite limited at the moment, though, but that can be said for other similar apps out there.