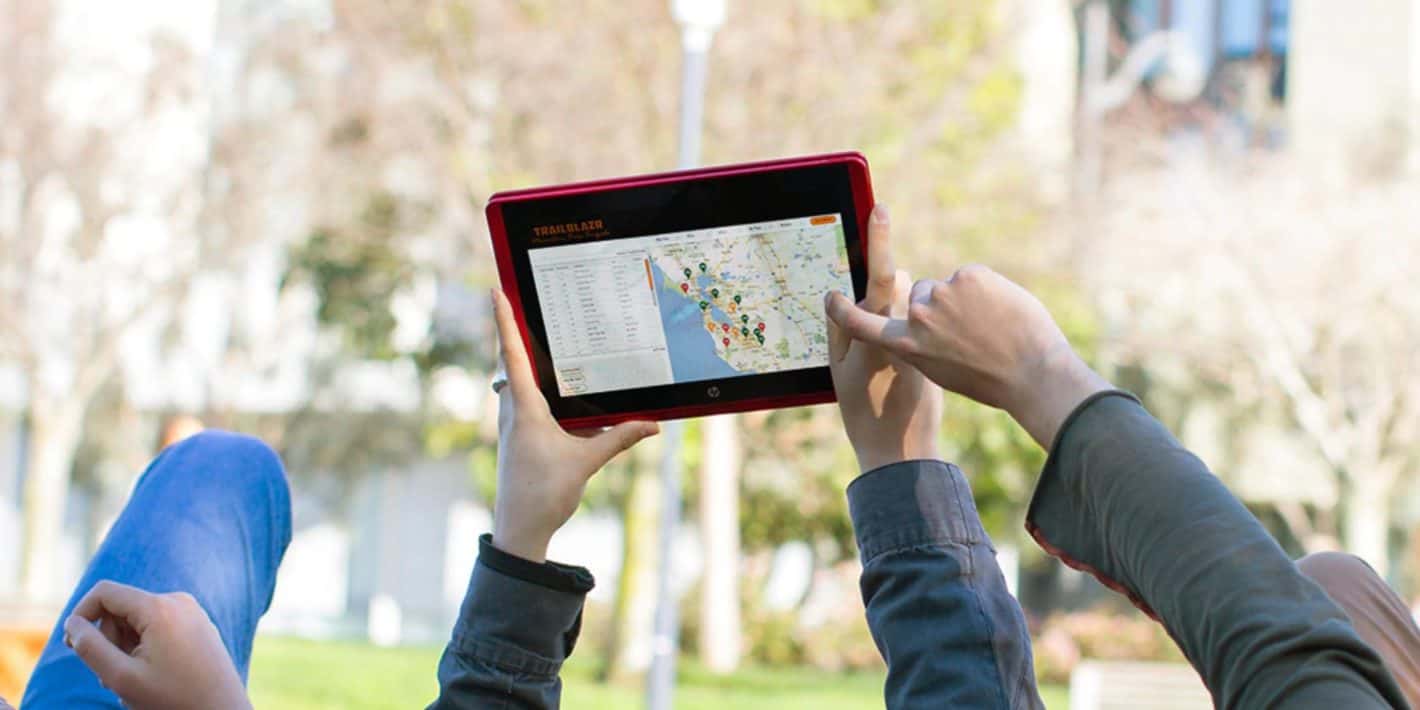 Smartphones sometimes just can't cut it when it comes to maintaining your productivity on the go or taking your entertainment with you, which is where tablets and Chromebooks come into play, at least if you don't want to invest in a larger laptop. Portable computing has been a thing for a long time but the latest generation of consumer electronics yielded some real gems, so with the holiday season being upon us, this is the perfect opportunity to get yourself or your loved one a new tablet, Chromebook, or even the best of both worlds – a Chrome OS tablet. AndroidHeadlines is here to help you do just that with a comprehensive list of the best Chromebooks and tablets the industry currently has to offer, regardless of your preferences and budget.

Google's Pixelbook might be a year old by now but it's still the ultimate Chromebook option due to its premium design, vast computational power, and the backing of one of the world's most valuable companies. Buying a Pixelbook means getting years of support from Google, which coupled with the inherently secure nation of Chrome OS means paying for a lot of peace of mind. The 4-in-1 form factor is also a massive plus, as is a battery that lasts for up to ten hours on a single charge. If you're a power user of Google Assistant and other Google-made services, the Pixelbook will provide you with the best laptop implementation of the thereof and paying a few extra dollars for the Pixelbook Pen will also take your productivity on another level. Best of all, this powerhouse is now frequently discounted and is once again available for well under $1,000 due to the upcoming holiday season, which makes this the perfect time to get one on the cheap.

While the popularity of tablets has been declining in recent years, Samsung remains among the rare few major OEMs that are still committing massive resources toward innovations in the segment, and the Galaxy Tab S4 is the latest result of that strategy; this Android tablet has it all, regardless of whether you're looking for entertainment or productivity tools, and can even be paired with an external monitor for a full-fledged desktop experience, courtesy of Samsung's DeX platform. Coupled with the Keyboard Cover and the best Super AMOLED display panel ever to grace a tablet, the Galaxy Tab S4 is an amazing option for anyone looking for a flagship tablet this holiday season.

The HP Chromebook 14 is all about value and versatility; consumers seeking a jack-of-all-trades alternative to Windows laptops that's more secure, portable, and gets more out of a single battery charge should look no further than this all-around great performer that will have you covered on all fronts without asking you to break the bank. Buying the HP Chromebook 14 now will also provide you with an extra 100GB of Google Drive storage for the next two years, whereas a $70 extra will also net you HP's latest Wireless All-in-One Photo Printer. As far as getting the most bang for your buck is concerned, the HP Chromebook 14 is the ultimate option this holiday season.

Entry-level Android tablets have never been great but a few hundred dollars goes a long way in the Windows ecosystem, which is perfectly exemplified by the Surface Go, Microsoft's latest portable computer that delivers some amazing features in a highly compact package. Its touch-enabled 10-inch PixelSense Display is one of the best tablet panels on the market and has been designed for everything from viewing to writing, while a streamlined version of Windows 10 Home will see it consistently hit eight hours of battery life on a single charge with mixed usage. If you don't want to give up on Windows apps and programs while on the go but find even the slimmest ultrabooks to be too bulky and pricey, the Surface Go is a device that you will enjoy for many years to come.

Best Chrome OS Tablet – the latest and greatest in the industry

The Google Pixel Slate only started being shipped to customers a few days back but the first reviews are already in and the general consensus is that this device now holds the title of the ultimate tablet option in the Chrome OS ecosystem. If you want the premium feel of the Pixelbook but prefer a smaller form factor, the Pixel Slate and its 12.3-inch molecular display will cater to your every need in style. Besides being the ultimate device for using Google Duo, the Pixel Slate is also Google's answer to Microsoft's Surface Pro lineup that allows you to take your work and entertainment on the go without sacrificing significant computational power. Finally, three free months of YouTube TV will sweeten the deal for anyone who buys the Google Pixel Slate in the coming weeks.

The life of a student can be quite dynamic, making the hunt for a reliable laptop much more difficult. If your last portable computer ended its service by being dropped in a hallway while you were running to class or just gave up on you at the most inopportune moment, perhaps due to a dead battery or a faulty hard drive, the ASUS Chromebook Flip C213SA-YS02 will do a great job at ensuring you don't have to go through such a nightmare scenario ever again. Not only is this one of the longest-lasting Chromebooks on the market, rated for up to twelve hours of usage on a single charge, but it also features a rugged design that can handle a lot of (accidental) abuse and is waterproof. That excellent level of durability also comes without any compromises on the flexibility front as this is still a 3-in-1 device which can be used in laptop, tablet, and tent mode.

Best Chromebook For Professionals – take your productivity to the next level

The Samsung Chromebook Plus remains the most versatile productivity tool the Chrome OS ecosystem has to offer not only because of its lightweight and portable 2-in-1 design but also due to its incredible battery life and a built-in pen experience meant to facilitate your note-taking in all scenarios. The 12.2-inch FHD display of the Chromebook Plus also uses a 16:10 aspect ratio which isn't the most common Chromebook image format but allows you to see more and get more done with less scrolling. Regardless of whether you need a laptop, tablet, or a flagship sketchbook, Samsung went above and beyond to cater to your every work-related need with the Chromebook Plus and is now even offering a model with LTE connectivity for even more flexibility on the go.

Samsung Chromebook Plus - From $399 (Amazon)

Best Tablet For Professionals – portability doesn't have to require compromise

The fact that Adobe is now bringing a full-fledged version of Photoshop to iPads is in itself a testament to how Apple's tablet lineup managed to evolve into a range of productivity powerhouses over the years and is now enjoying tremendous support from a wide variety of developers. The 2224 x 1668 Retina Display and A10X chip of last year's model continue to impress, so while the 2018 version has already been announced and will soon be hitting the store shelves, if you're adamant on getting one now, the 2017 variant remains the most capable productivity tablet you can currently get your hands on and supports almost every feature of its successor at a (much) more sensible price point.

The latest addition to the standard iPad range is already available for purchase and unsurprisingly excels at all tasks related to entertainment. With the iOS ecosystem offering millions of highly rated games and the new iPad packing a lot of computational power and a wonderful screen to accompany it, it's currently the best option for a pure entertainment device in this product category, and is an especially attractive proposition at its aggressive price point, something that's rarely said of Apple devices. So, if playing games and watching movies is your main concern as far as tablets are concerned, the iPad (2018) will provide you with everything you need for up to ten hours on a single battery charge.

With the seventh-generation Intel Core M processor, a touch-enabled 12.3-inch (2400 x 1600) display, 4GB of RAM, up to 12.5 hours of battery life, and a compact 2-in-1 design that allows it to function as both a laptop and a tablet, the HP Chromebook x2 is meant to serve as the ultimate entertainment option in the Chrome OS ecosystem. Its form factor also enables it to work in tent mode which is perfect for watching movies, whereas Android app compatibility will provide you with millions of games you can download from the Google Play Store. Better yet, this is actually a detachable Chromebook, so if you don't need its keyboard at any particular time, you can just do away with it altogether and make the device even more portable.

Best eReader – the world's largest library on your fingertips

Amazon has been dominating the eReader game for a long time and the Kindle Oasis is the epitome of the company's product philosophy, being an extremely portable and waterproof gadget with up to 32GB of storage space that will allow you to take entire libraries with you. The 7-inch screen of the device is also the sharpest one Amazon implemented into an eReader yet, boasting a pixel density of 300 dots per inch. Coupled with Bluetooth and a sleek design, the Kindle Oasis also doubles as the ultimate tool for listening to audiobooks, so regardless of the type of reading you like to do, this gadget will deliver on all fronts and then some.

Kindle Oasis - $249 (Amazon)
Advertisement
Trusted By Millions
Independent, Expert Android News You Can Trust, Since 2010
Publishing More Android Than Anyone Else
28
Today
28
This Week
136
This Month
4121
This Year
105598
All Time
Advertisement