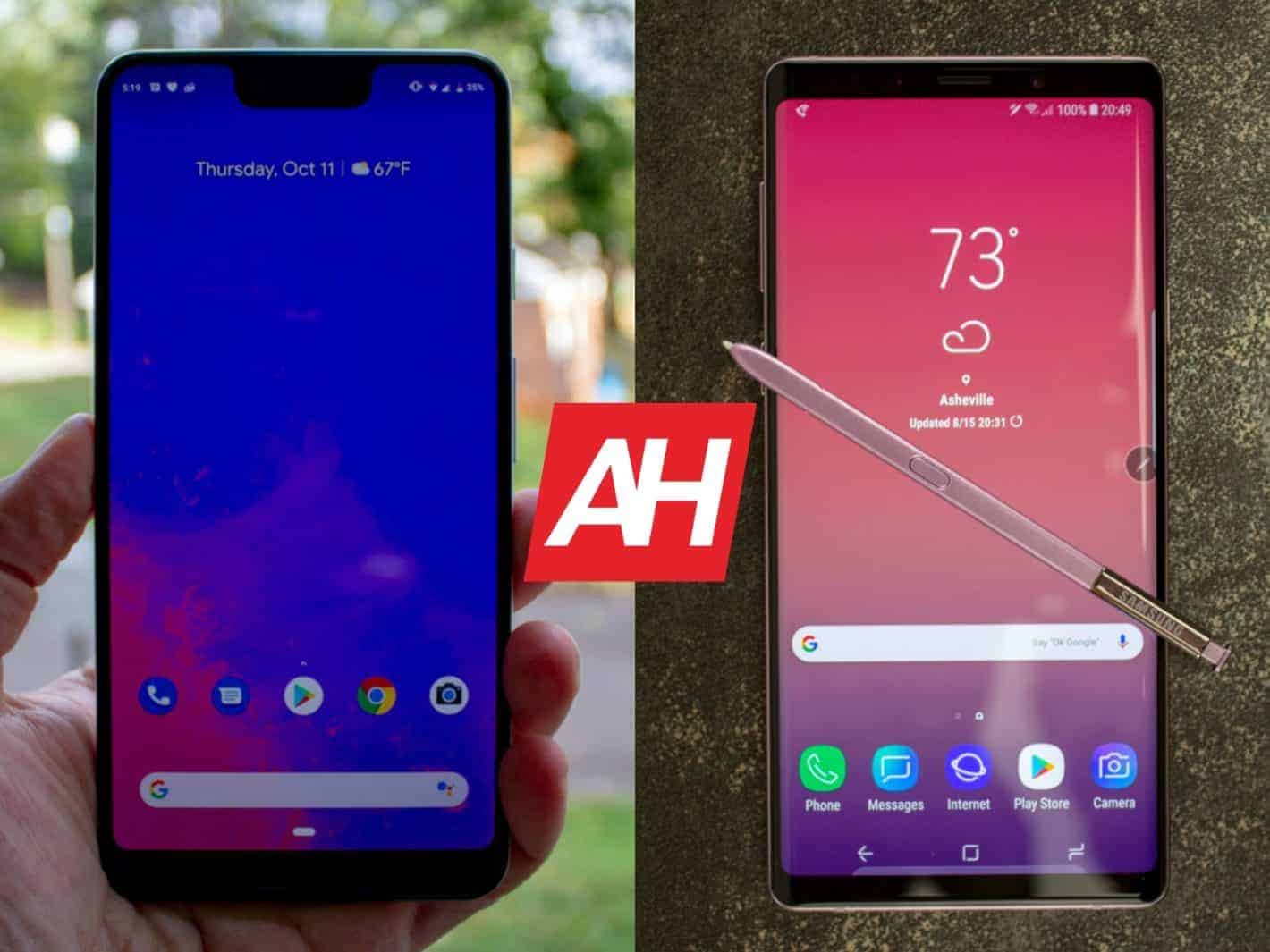 Do we have a good one for you today – the new Google Pixel 3 XL takes on the new Samsung Galaxy Note9. Some will say that the Galaxy Note9 is going after a more specific user, but if the Pixel 3 XL is asking a price of $1,000, then the Pixel 3 XL is in the same stratosphere as the Galaxy Note 9 – S Pen or no S Pen. You will get Android 9 Pie on the Pixel 3 and receive the fastest updates, but for a number of average consumers the most recent OS version might not be what they are focused on when looking to buy a new smartphone. For example, while the more tech-heavy user will take the OS into consideration, the average mom and pop are figuring out how to use a phone while more younger users might just be happy enough to have a phone.

These two devices do have some shared technology. They both use the OLED display technology for example, as well as a QHD+ resolution, 18.5:9 aspect ratio, Always-on Display (AoD), HDR10-compliance, and Gorilla Glass 5. They also have the same Snapdragon processor and the same Adreno 630 GPU. While they each use a 12-megapixel sensor for their main camera, the Galaxy Note9 uses dual cameras – however, the Note9 uses an 8-megapixel front-facing camera (FFC), but the Pixel 3 XL uses dual 8-megapixel sensors for its FFC. Both use a non-removable battery, fast charging, and fast wireless charging. These devices are even physically very close in size with the Note9 weighting in at just 17 grams more than the Pixel 3 XL. They both are IP68-certified, use Google Pay, employ stereo speakers, rear-mounted fingerprint sensors, and many of the usual suspects – NFC, Wi-Fi, USB Type-C, and Bluetooth v5.0.

Please take a careful look at the detailed specifications comparison chart below and you will see just how these two high-end smartphones stack up against each other. After that, we will look at each mobile offering in more detail while pointing out some of the pros and cons. From all of this information we will try to determine the winner based on overall specs, as well as the execution of design and functions.

If Google expects Samsung, LG, or HTC users to jump to its Pixel 3 line of phones, the phones need to offer more features than just quick updates. They'll also need to have smaller bezels, more RAM, and expandable memory. When it comes to desirable looks, the Pixel 3 XL is better looking than the Pixel 3, although that might depend on your view of the notch. While the Pixel 3 XL takes a great picture, most other flagships have moved on to dual cameras – which, if used properly, can offer more photo options – the Pixel 3 XL still uses only one camera in the main camera area, but offers a more useful dual FFC. The all Gorilla 5 design did give Google the ability to offer wireless charging and being a Google phone it does come with support for a number of the company's features, such as Google Pay, Google Assistant, Google Lens, and free access to Google Photos' premier features. The Pixel 3 line also offers an improved Active Edge, Playground, and Smart Lock, as well as IP68 dust and water-resistance, and front-facing stereo speakers. You can buy it unlocked to work on any major U.S. carrier, but Verizon is still the exclusive dealer of the Pixel 3 series phones.

The Pixel 3 XL did increase the display size from 6.0-inches to a whopping 6.3-inches. It continues to use a QHD+ resolution and the OLED technology. The resolution is 2960 x 1440 pixels, giving you a density of 523 PPI. The Pixel 3 XL utilizes the 18.5:9 aspect ratio that makes the display taller and thinner for better viewing of movies, videos, and game playing. If you do multitasking, this ratio will give you two square viewing displays. Google uses the Always-On Display (AoD) that not only helps save your battery, but makes it easier for the user to quickly see their notifications. Google uses Gorilla Glass 5 protects this improved display.

The Pixel 3 XL uses the most-used premium processor in 2018 – the Snapdragon 845 octa-core processor clocked at 2.5 GHz, and paired to the Adreno 630 for graphics processing. This combo works great with the new Android 9 Pie, giving you a smooth and fast experience. Google decided to use 4GB of RAM to help with multitasking. Your option of fixed storage is only 64GB or an optional 128GB. Considering the price of the Pixel 3 XL, Google should had added more RAM and storage – or at least the option to expand the storage. Google would like you to send your photos to the cloud, but it is nice if you can keep them on your phone. Google decreased the battery size from a 3,520 mAh capacity in the Pixel 2 XL to a 3,430 mAh capacity in the Pixel 3 XL, but added quick wireless charging.

Google took its camera obligations seriously once it started pushing the Pixel moniker, in fact, the Pixel 2 series had the best mobile camera rating when it first hit the market – and that was with a single lens. Google has put in the same work on the Pixel 3, although other manufacturers have already done their own homework in creating their own excellent camera solutions. Although the basic camera from the Pixel 2 XL is on the Pixel 3 XL, newer software and more features make it a better camera experience overall. The main shooter is a 12.2-megapixel sensor with an f/1.8 aperture, OIS, laser and PDAF, a dual-LED flash, and auto-HDR. Like the standard Pixel 3, there is no optical zoom. Google decided that a new twist would be to add a dual 8-megapixel FFC with an aperture of f/1.8, PDAF, and auto-HDR, and the other with an ultra-wide sensor sporting an f/2.2 aperture and no autofocus.

One problem Google has with the Pixel series is timing. While it has the newest processor, as soon as its competition comes out with new models in the spring, they will have the even newer processor and this will help to make the Pixel 3 XL feel that much older. Google did increase the display size, added the new aspect ratio, and kept the QHD+ resolution, but decided to add a notch. Google was able to add wireless charging once the back of the device was covered with Gorilla Glass 5. The camera offers better software and features giving you a better experience than the Pixel 2 XL. It has an improved Google Camera Lens and Active Edge, making the features more useful. The Pixel 3 XL no longer has the 3.5mm headphone jack, but it does offer very good sounding stereo speakers. Like the standard Pixel 3, buyers of the 3 XL can expect a lighter version of Android and the fastest updates. The Pixel 3 measures 161.9 x 76.4 x 8.8mm and weighs in at 201 grams. It is available in three colors – Just Black, Clearly White, and Not Pink. The Pixel 3 XL will cost about $930 – $1,039 with 64GB/128GB of storage and is available for purchase from the Google Store, Best Buy and as a wireless carrier exclusive through Verizon.

The Samsung Galaxy Note9 looks very much like the Galaxy Note8 – the first Samsung to get a dual camera setup. The display is slightly larger, the cameras are improved with a new dual aperture, and the processor/GPU has also been improved. The Note9 finally got its stereo speakers, and also sports a new Bluetooth S Pen that can be used as a remote ‘clicker’ to take a picture, click to forward a presentation, and so on. Many thought that the fingerprint sensor would finally be embedded in the display glass – but it was moved below the camera to help prevent smudges on the lens.

Manufacturers often increase the displays by only a small amount, such is the case with the Galaxy Note9 where the display increased from 6.3-inches on the Note8 to 6.4-inches. Samsung still uses its near bezel-less Infinity Display, the 18.5:9 aspect ratio, a 2960 x 1440 resolution with a pixel destiny of 516 PPI. Samsung also continues with its excellent AoD to save battery life, but also make it easier for the user to quickly check their notifications without actually turning on the phone. Gorilla Glass 5 covers the front and back of the Note 9 with a metal frame holding it all together.

The Snapdragon 845 and an Adreno 630 used in the Galaxy Note9 is the same combo used in the Galaxy S9 series and the Pixel 3 series. The SD845 octa-core processor is clocked at 2.8 GHz. The Note9 comes standard with 6GB of RAM and 128GB of expandable memory. If you want more built-in storage, there's a model that packs 8GB of RAM and 512GB of expandable memory. The battery finally increased in capacity to 4,000 mAh, which should easily get you through an entire day. If you need to charge the battery, Samsung offers its Adaptive Fast Charge or quick wireless charging for either Qi or PMA formats.

The dual cameras on the Galaxy Note8 were improved and found their way to the Galaxy S9/S9 Plus and are now on the Galaxy Note9. Sporting 12-megapixel Dual Super Pixel cameras with one offering 2x Optical Zoom. The main camera uses a dual aperture – f/2.4 for bright shots and an f/1.5 for darker shots – with OIS, PDAF, and an LED flash. The secondary camera has a wider angle, an aperture of f/2.4, and live focus (bokeh). The FFC is 8-megapixels with a large aperture of f/1.7 for better low-light selfies, auto-HDR, along with its own autofocus. This setup is a great for excellent selfies and video chatting.

Samsung loves to add ‘bloatware’ to its devices – certainly its high-end devices. The usefulness of these features depend on whether the user is in to exercise, otherwise many won't offer much value to consumers. The heart rate monitor, SpO2 sensor, and the new blood pressure monitor fall into that category. Samsung Pay is a popular app that benefits those that use mobile payments because it allows access to more vendors. Samsung decided that Google Assistant was not good enough so the company developed its own solution, Bixby. Connection to Samsung’s DeX by using a simple dongle is made easier on the Note9. The Note9 keeps its side panels that roll on and off the edge of the display that display ten contacts and ten apps. The Note9 comes with its much improved S Pen that now has Bluetooth to offer a number of improved features – for example, to snap a picture from a distance. In the US, the Note9 is initially available in Lavender Purple and Ocean Blue, but is also available in Midnight Black and Metallic Copper elsewhere – depending on market and carrier. It comes with Android 8.1 (Oreo) out-of-the-box and the newest Samsung Experience 9.5 (UI). The device measures 161.9 x 76.4 x 8.8 mm, weighs in at 201 grams and will cost you a sweet $1,000 for the 6GB/128GB model – which is actually cheaper than the Pixel 3 XL with the same amount of storage.

The Pixel 3 XL and the Galaxy Note9 are both very capable devices, but we are talking about devices with a $1,000 price tag. When a device reaches this lofty price level, we expect more than simply a capable device – we want a device that goes beyond ‘capable.’  We expect to see some bells and wishes, a top-level display, extra RAM for multitasking, expandable memory, dual rear cameras, a 3.5mm headphone jack, and special features – none of which the Pixel 3 XL offers. This is why the Samsung Galaxy Note9 is the winner of this comparison.