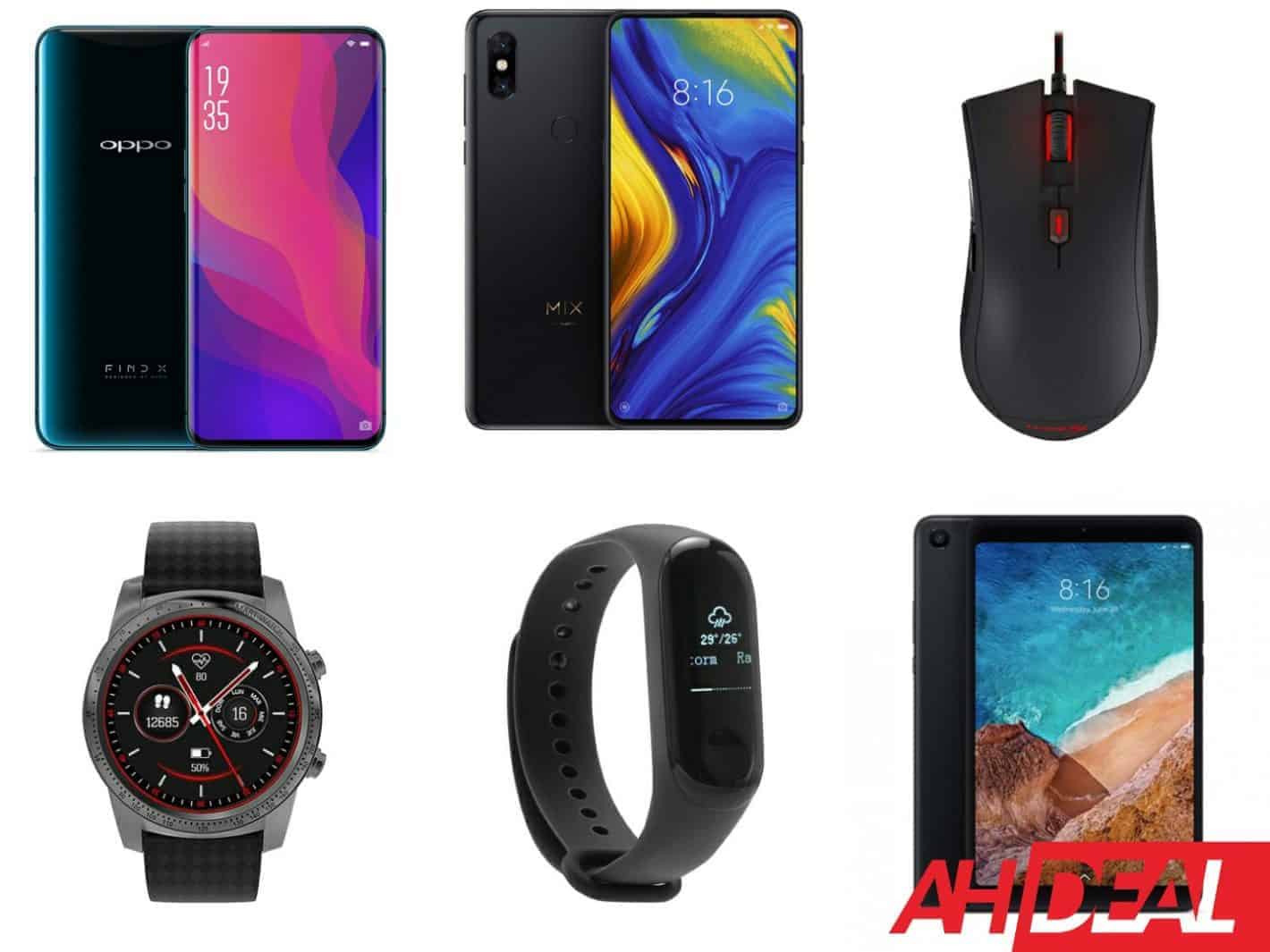 Geekguying has provided us with a number of coupon codes which will secure a discount on some products from the site. If you’re in the market for a new phone, tablet, smartwatch, or gaming mouse, well, you may want to stick around. A total of nine products can be found on the list down below, and you’ll even find Xiaomi’s and OPPO’s latest and greatest phones down there. For some devices, discounts are quite considerable, while from other they are around $10, but still worth it if you’re buying the products anyway. Having said that, let’s get started, shall we.

The OPPO Find X is OPPO’s latest flagship, and the device that has a really high screen-to-body ratio at 94.8-percent. This smartphone is made out of metal and glass, while it also comes with a sliding camera mechanism. The device is fueled by the Snapdragon 845 64-bit octa-core processor, and it includes 8GB of RAM, while a 6.42-inch fullHD+ AMOLED display is also a part of the package. This device usually costs $759.99, but you can now get it for $709.99, thanks to a $50 coupon. This coupon is limited to the first 50 purchases.

The Xiaomi Mi Band 3 is Xiaomi’s latest fitness tracker, and a fitness tracker that arguably gives out most value for the money you’ll spend for it. The device comes with a 0.78-inch OLED display, which is touch-sensitive, while Bluetooth 4.2 is included in the package as well. This device comes with 5ATM certification for waterproofing and dust resistance, while it can show you your notifications without a problem. The Mi Band 3 can be yours for $26.99 thanks to the provided coupon, and the coupon is limited to 50 purchases.

Gaming mice are usually quite expensive, especially if they’re good, well, that’s not the case with the Kingston HyperX Pulsefire. This is actually quite a solid gaming mouse, and it’s not exactly as cheap as some other mice out there, but this is actually quite a solid gaming mouse. It comes with six buttons, up to 3,200 DPI, and on top of that, it looks quite nice as well. This mouse can be yours for $49.99, as long as you utilize the provided coupon code (first 50 purchases).

The ALLCALL W1 3G smartwatch is ALLCALL’s smartwatch in which you can insert your SIM card, and thanks to that, connect to a 4G network, so you can basically use this watch for phone calls, if that’s your thing. The watch is fueled by the MediaTek’s MT6580 64-bit quad-core processor, and it comes with Android 5.1 pre-installed. The watch is made out of metal, while it has two physical buttons on the right. The provided coupon will bring the price of this watch down to $104.99 (first 50 purchases).

The Xiaomi Mi MIX 3 is the most powerful smartphone Xiaomi had released to date. This smartphone actually launched quite recently, and it comes with a really high screen-to-body ratio, while it is made out of metal and ceramic. The device comes with a camera sliding mechanism, and it is fueled by the Snapdragon 845 SoC, while two variants of the phone are on sale on Geekbuying, both offers 8GB of RAM, though the difference is in storage, 128GB and 256GB. You can purchase these two smartphones for $696.99 ($55 off) and $699.99 ($75 off), respectively, thanks to the provided coupon codes, though do keep in mind that only the first 50 buyers will get a chance to take advantage of those coupon codes (for each device).

The Redmi Note 6 Pro is one of Xiaomi’s mid-range smartphones. This device comes with a display notch, and relatively thin bezels, while there are two vertically aligned cameras included on its back. A fingerprint scanner lies on the back of this phone as well, while the device features a 6.26-inch display, and it is fueled by the Snapdragon 636 64-bit octa-core processor. The provided coupon will shave off $15 off this device’s price tag, so you’ll be able to get it for $196.99, and that coupon can be used by the first 100 buyers.

The Xiaomi Mi Pad 4 is the latest tablet from the company, and it is made out of metal. This is a Wi-Fi variant of the tablet, and it sports an 8-inch 1920 x 1200 display. The Snapdragon 660 64-bit octa-core SoC fuels this tablet, while the device includes 3GB of RAM and 32GB of storage. A 6,000mAh battery is also included in the package, while you will find a 13-megapixel camera on its back. This tablet can be yours for $159.99 with the provided coupon, and the first 100 buyers can take advantage of it.

The K3DX V5 is an extremely affordable smartphone that most of you probably haven’t heard of. This phone features a 5.5-inch display, while it is fueled by the Snapdragon 617 processor. Android 5.1 comes pre-installed on it, while a 13-megapixel camera lies on its back. This phone comes with 3GB of RAM and 32GB of storage, while it sports a fingerprint scanner on the back, and it resembles some of LeEco’s smartphones. This device is now priced at $89.99, and the coupon code is valid for first 50 purchases.

The Xiaomi Mi 8 Lite is the least powerful Mi 8 smartphone that Xiaomi introduced, and yet it’s a really capable mid-ranger. This smartphone is fueled by the Snapdragon 660 64-bit octa-core processor, while it features 12 and 5-megapixel cameras on the back. A fingerprint scanner is also included on the back of this phone, while you will find a 6.26-inch display on the front side of the Mi 8 Lite. The device supports fast charging, and it is made out of metal and glass. The Mi 8 Lite can be yours for $239.99 ($52 off), while the coupon code is valid for the first 100 purchases.