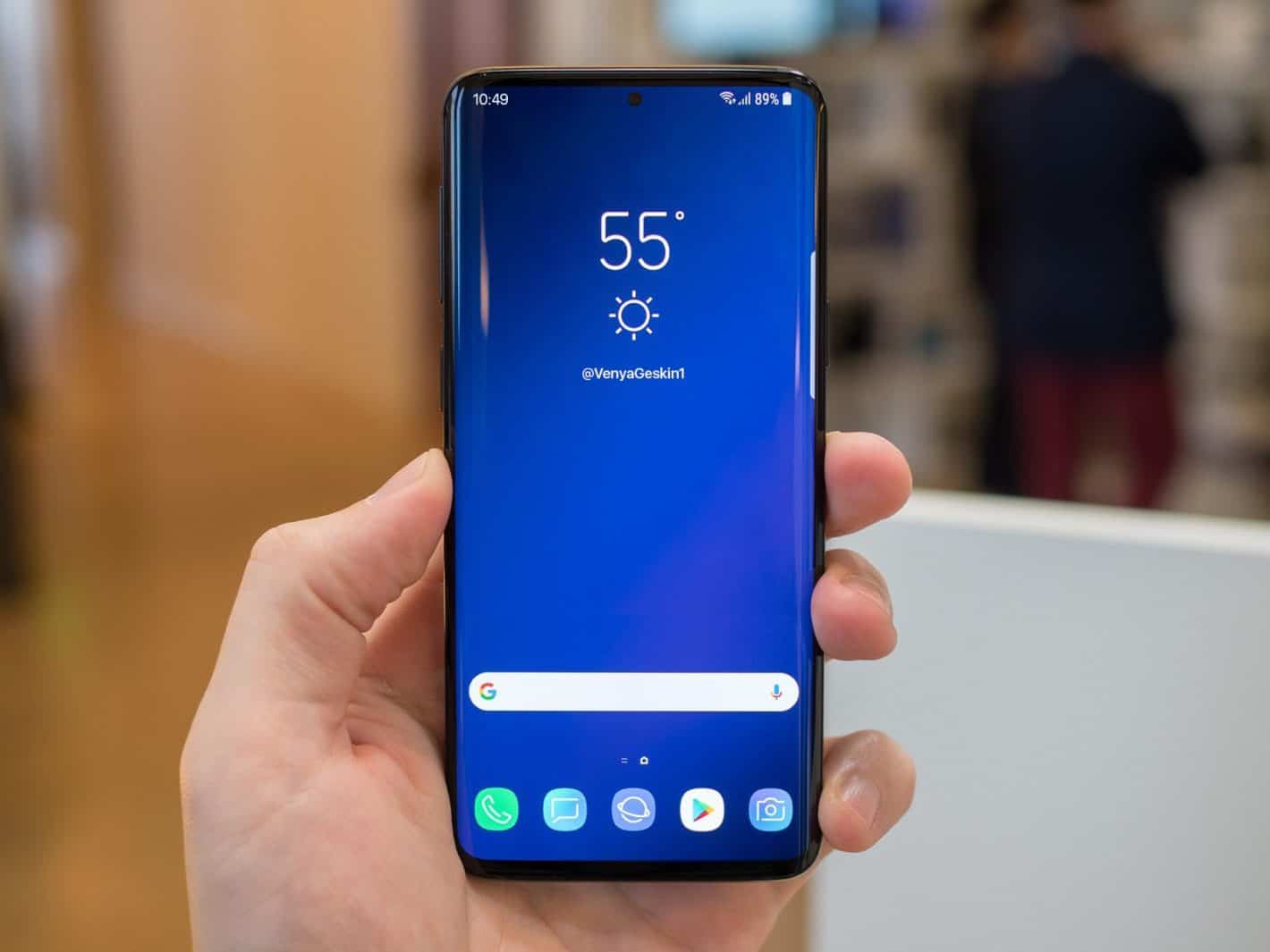 The Samsung Galaxy S10 is still months from being announced, and while we're waiting to see more leaks regarding that device, a designer called Ben Geskin just shared a concept design of the Galaxy S10, which is based on rumors and leaks that we've seen thus far. If you take a look at the two images provided here (above and below the display), you will see a phone that resembles the Galaxy S9 from the front quite a bit, but its bezels are considerably thinner. Now, if you take a closer look at those images, you will notice that the device does not have a display notch, but it does have a camera hole in the display, which is something that we'll probably start seeing in the near future. Samsung already hinted that one of its mid-range smartphones may ship with such design, while the OPPO R19 leaked with a camera hole in the display as well, along with some ASUS-branded smartphones.

The device that you can see here is almost completely bezel-less, and could technically be achieved if the company includes that camera hole in the display, instead of messing with notches, which is something Samsung will probably not do, especially with its flagship Galaxy S and Galaxy Note series devices. The display on this concept smartphone is curved on the sides, similarly to the one on the Galaxy S9. The designer actually included Samsung Experience UI on the display of this phone, to make it more realistic, and even the Bixby button is visible on the left, along with volume up and volume down buttons. The phone's display sports rounded corners, and if the real deal ends up looking like this, it will probably ship with a glass back as well.

Background: The Samsung Galaxy S10 will probably become official during the Mobile World Congress next year, in February, along with its sibling, the Galaxy S10+. The two devices will likely sport the same design, and there's even a chance that Samsung may introduce a third, smaller Galaxy S10 smartphone which was rumored recently. The Galaxy S10 lineup is rumored to sport a noticeably different design compared to the Galaxy S8 and S9, and Samsung will almost certainly trim down the bezels even further. The Galaxy S8 and Galaxy S9 resemble one another quite a bit, and that is not exactly surprising, the Galaxy S6 and S7 were quite similar as well. That's what Samsung does, it releases two generations of its phones which do resemble one another quite a bit, and then changes up the design with the third-gen model, which is the Galaxy S10 in this case.

We do not know much about the Samsung Galaxy S10 thus far, but some info did surface. The device, other than the fact that it may look like Ben Geskin showed, will also pack in the top of the line specifications, needless to say. The Samsung will almost certainly look to release smaller and larger Galaxy S10 once again, plus the possible third variant that we've mentioned. Well, all of those phones will ship with every similar internals, at least that's what is expected. The Galaxy S10-branded smartphones are expected to arrive in two SoC variants, same as their predecessors. In the US and China, the Galaxy S10 will be fueled by Qualcomm's next-gen flagship processor, the Snapdragon 855 or 8150, depending on what name Qualcomm opts for. That processor will be announced later this year, and the Galaxy S10 will be one of the first smartphones to ship with it. The European variant of the device, on the other hand, is expected to include Samsung's very own Exynos processor, though it is currently unknown what will it be called, but it will be on the same level as the Snapdragon 855 / 8150.

Android 9 Pie will come pre-installed on the Galaxy S10 and Galaxy S10+, along with Samsung's Experience UI on top of it, of course. Once that update lands on the Galaxy S9, S9+, and Note9, we will have a far better idea as to what to expect on the software side, even though the Galaxy S10 and S10+ will deliver some new features, of course. Samsung's new navigation gestures will be included, though, for sure, as they were already shown off in the latest beta for the Galaxy Note9 and Galaxy S9+. Both the Galaxy S10 and S10+ will support fast wireless charging, and fast wired charging, though it remains to be seen if Samsung plans to step away from Quick Charge 2.0 charging speeds (in terms of wired charging), or will it stick with them or another year.

Impact: The Galaxy S10 rumors are still quite vague, and we still did not see a proper leak of the device, which will probably change in the next couple of months, as is usually the case. We will see a ton of rumors, and it's quite possible that the Galaxy S10 will ship with a camera hole in the display, not only is Samsung planning to introduce one of its mid-range smartphone with such design, but putting such a camera hole in the display would solve a lot of problems for Samsung as far as the design is concerned, the only question is whether the company thinks this is a solution for the design of its flagship line or not.