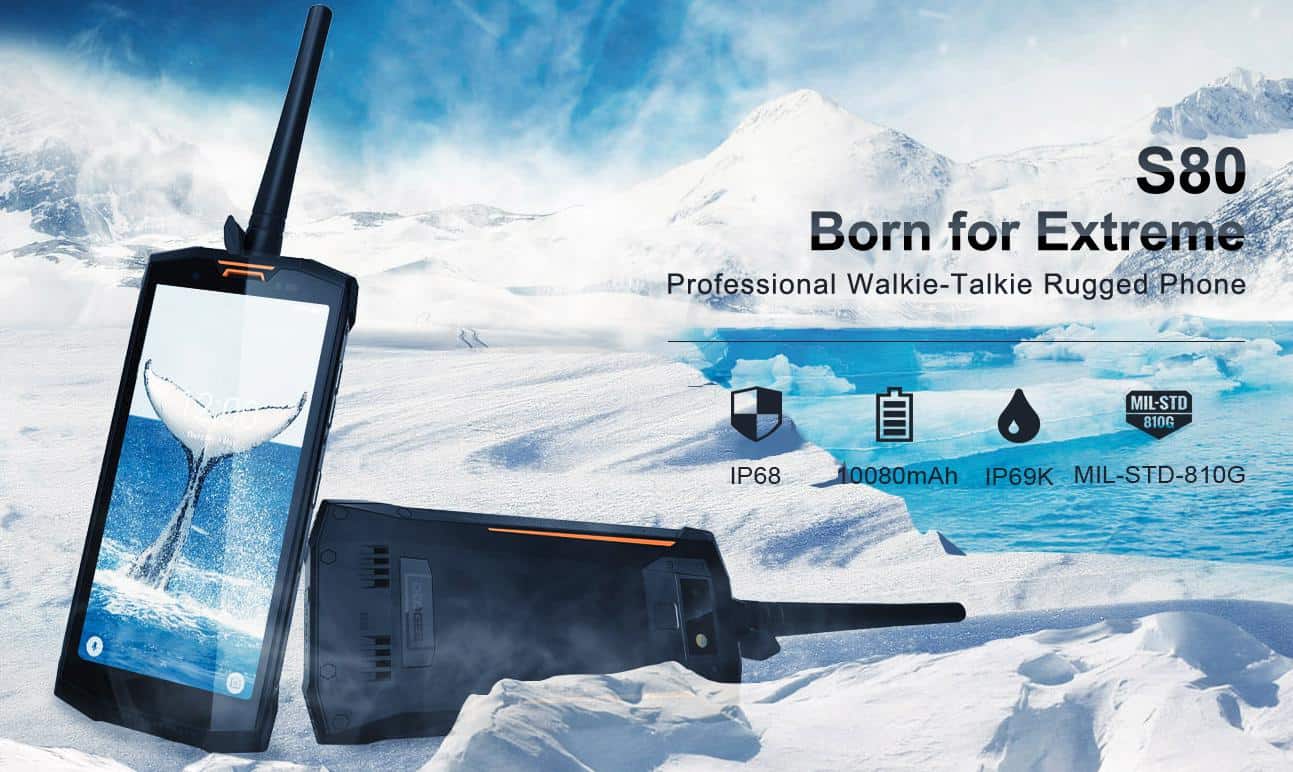 DOOGEE has announced its very own rugged smartphone with walkie-talkie functionality, the DOOGEE S80. This smartphone is a direct competitor to the Ulefone Armor 3T, and it comes with a huge battery on the inside, which we’ll talk about in a moment. The DOOGEE S80 comes with a detachable antenna, which you’ll need in order to use this phone as a walkie-talkie, when you don’t need such functionality, you can simply remove it, easily. The DOOGEE S80 comes with two horizontally-aligned cameras on the back, next to which you’ll notice an LED flash. A fingerprint scanner is located below the phone’s cameras, while this handset sports rear-facing speakers.

The DOOGEE S80 is IP68/IP69K certified for water and dust resistance, while it also has MIL-STD-810G ruggedness certification. A 10,080mAh battery is included in the phone, and it’s one of the device’s main selling points, that’s for sure. This smartphone features a 5.99-inch fullHD+ display by LG, while it is fueled by the Helio P23 64-bit octa-core processor by MediaTek, that is one of MediaTek’s most powerful mid-range processors. The device equips 6GB of RAM and 64GB of storage, while you will find 12-megapixel (Sony’s IMX363 sensor, f/1.8 aperture)) and 5-megapixel cameras on the back of this smartphone. A 16-megapixel camera (f/2.0 aperture, 80-degree wide-angle lens) is included on the phone’s front side, while this smartphone also comes with 24W fast charging for its huge battery pack. NFC is built into this smartphone as well, while the phone sports two SIM card slots (2x nano SIM). The DOOGEE S80 supports 4G connectivity, both FDD-LTE (B1/2/3/4/5/7/8/12/17/19/20) and TDD-LTE (B34/38/39/40/41). Android 8.1 Oreo comes pre-installed on this smartphone, in case you were wondering.

Now, in order to present this phone properly to its consumers, DOOGEE has shared a promo video on YouTube, a video that emphasizes the device’s features, while it also shows the phone’s design. This video has a duration of one minute, and in addition to it, the company had also posted a video that shows off the MIL-STD-810G test of the device, along with the DOOGEE S70. This video was posted a while back, in September, and it has a duration of two and a half minutes. Both videos are embedded down below, for your convenience. If you like what you’re seeing, and want to pre-order the device, you can do so via AliExpress, simply follow the link down below.