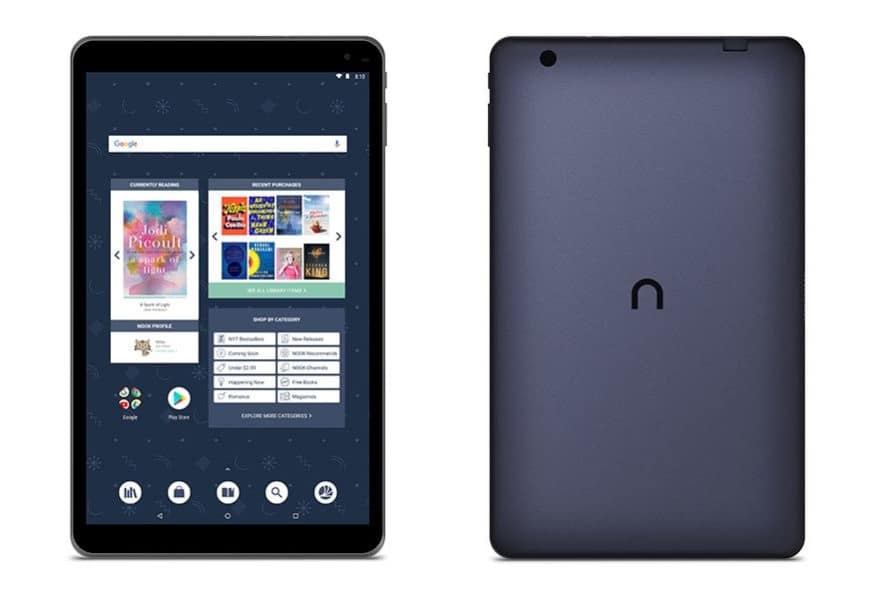 Barnes & Noble introduced a new Android-powered tablet with 2-in-1 capabilities this week, touting it as a "game changer" for the NOOK series. The new model named NOOK 10.1 has a 10.1 IPS display which the OEM claims to have been optimized for reading, and the device also has access to Google Play Store where users can browse for Android applications as well as eBooks. Unlike the previous 7-inch NOOK tablet launched nearly two years ago, the latest model is equipped with pogo-pin connectors expanding its capabilities as a browsing and emailing machine with the help of a keyboard accessory which will be sold separately for a yet-undisclosed price. The tablet itself is set to hit the market later this month for the fairly low price of $129.99.

The NOOK 10.1 features a display with a resolution of 1,920 by 1,200 pixels, leading to a pixel density of 224ppi. Internal hardware details are somewhat scarce, with the choice of chipset and RAM being unknown as of this writing, but the unit has 32GB of flash memory which can be expanded by up to an additional 256GB via a microSD card. In terms of connectors, the NOOK 10.1 features a micro-USB 2.0 port and a standard 3.5-millimeter headphone jack, and for connectivity, the tablet takes advantage of Wi-Fi 802.11 a/b/g/n/ac, with Bluetooth seemingly missing. It also features a 2-megapixel camera on both the front and back and supports a wide variety of file formats for audio, video, and eBooks, including PDF, ePUB, DRP, ePIB, HWP, HWT, HML, HWPX, and more. According to the official spec sheet, the NOOK 10.1 is equipped with a battery that should offer up to 8.5 hours of reading, watching videos, and web browsing.

Android tablets may not be as prevalent as smartphones, but that's not to say that they are gone from the market despite their dwindling popularity. Either way, Barnes & Noble's slates have always existed in their own niche segment where they have placed an emphasis largely (and sometimes solely) on eBook reading. The NOOK 10.1 is in a similar position, but unlike the majority of tablets in the lineup, this latest product expands its horizons a bit further into the world of productivity. This could put the OEM back into the spotlight, and it might be the just the product needed by Barnes & Noble after the rocky launch experienced by the NOOK 7 following its late-2016 debut. On one hand, the previous model was priced very aggressively, but on the other, it lacked the multimedia oomph touted by the latest model, and to make matters even more difficult for the OEM, its chargers had to be recalled due to a light defect. The latest NOOK 10.1 will be available for purchase at Barnes & Noble stores starting November 14 for the price of $129.99, however, between November 22 and December 31, the slate will be available for the special price of $119. Additionally, in the same timeframe, Barnes & Noble will offer a special bundle, allowing customers to acquire the device alongside a charging dock and $50 worth of eCookbooks, all for the price of $159.