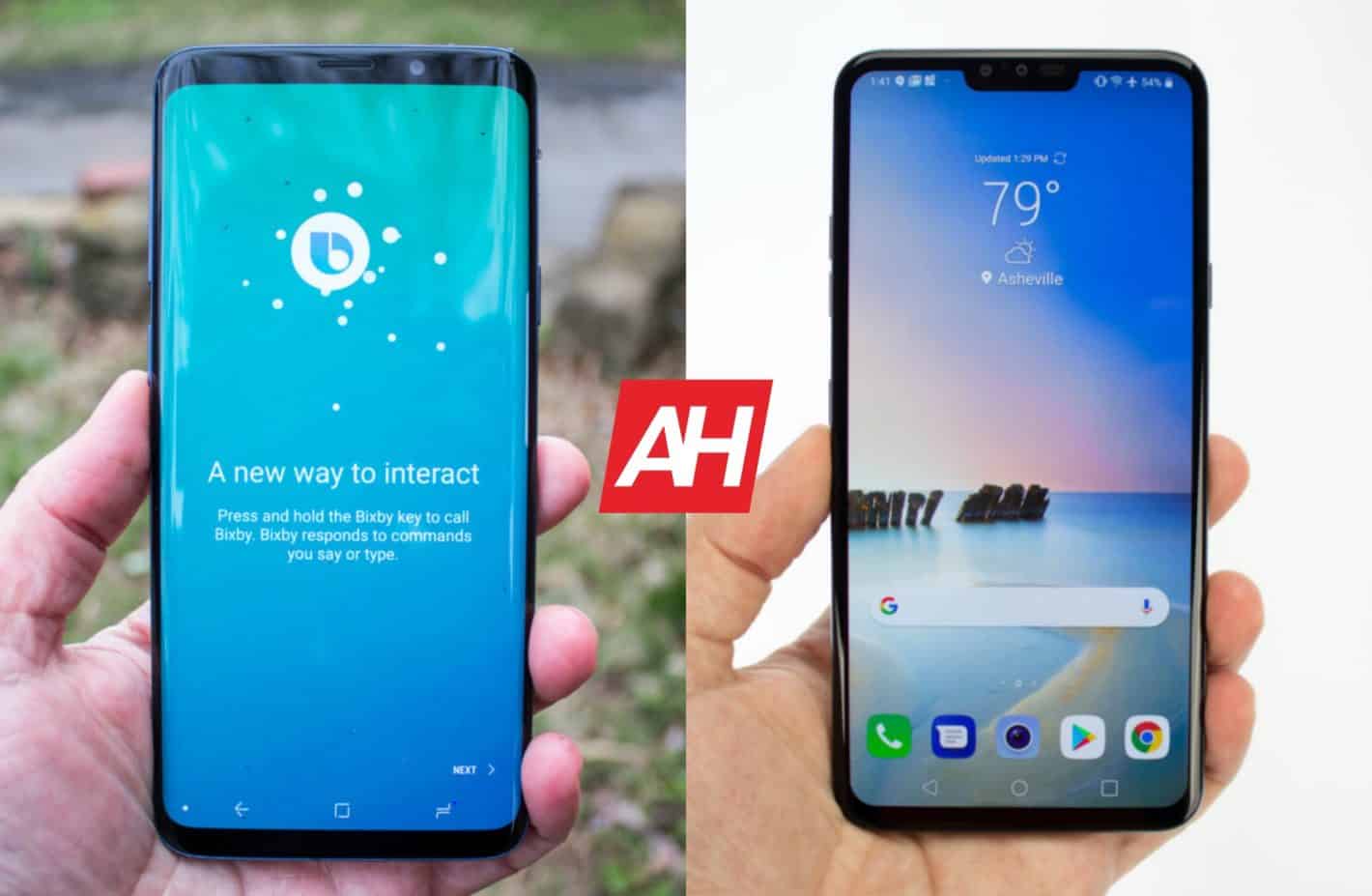 Do we have a good one for you today – the latest Samsung Galaxy S9+ gets compared to the new LG V40 ThinQ. Both of these devices are true flagships, with a great build quality, lots of features, and expensive with the S9+ costing about $930 and the V40 ThinQ about $980. Both devices are currently receiving heavy discounts so prices vary greatly. The S9+ is probably the more attractive phone and it has many features and health-related items not available on the V40 ThinQ. In return, the V40 ThinQ is strong on cameras with five sensors in total — three on the back and two on the front — and all the software needed to run a photography studio. As a result these two phones cater to different users and which is better for you might come down to whether you use you device for everyday chores and/or exercise or if you are really into photography.

These two smartphones, despite their differences, do have a lot in common. Both provide a display in excess of 6-inches, QHD+ resolution, newer aspect ratio, Always-On display, and Gorilla Glass 5 for protection. They both use the newest Snapdragon 845 processor and Adreno 630 GPU. Both come with 6GB of RAM for improved multitasking and a minimum of 64GB of expandable storage. There’s some crossover in the camera departments with a 12-megapixel main camera and an 8-megapixel front-facing camera (FFC) – although the Galaxy S9+ and LG V4o ThinQ take an entirely different approach to cameras beyond this. The physical sizes are almost identical with the S9+ weighting in 20 grams heavier at 189 grams. They both have the usual suspects – NFC, Wi-Fi, Bluetooth v5.0, and a 3.1 USB Type-C Port for charging and data tranfer. They both support Google Pay, High-Res audio, stereo/Boombox speakers, facial recognition, 3.5mm headphone jack, IP68 certification, Android 8 Oreo, and rear-mounted fingerprint sensors.

Please take a careful look at the detailed specifications comparison chart below and there you will see just how these two high-end Android smartphones stack up against each other. Which one is the better purchase by offering the most technology for the least amount of money? This question and more we will hope to answer in this comparison.

When you compare the looks of last year’s Galaxy S8+ to the new Galaxy S9+, you might not notice any big changes. The edges were ever so slightly redesigned to make it easier to pick up and hold without accidentally opening an app. Samsung finally included stereo speakers in the Galaxy S9+. Dual cameras drifted over from the Galaxy Note 8 with a few improvements as well as improved software. Samsung’s new Intelligent Scan combines the Facial Recognition and Iris Scan together for more security and quicker access to unlocking the phone. Once again, the fingerprint sensor is moved below the camera lens to prevent print smudges on the lens. To combat Apple’s popular Memoji, Samsung introduced AR Emoji.

The new Galaxy S9+ uses the same-sized 6.2-inch Super AMOLED Infinity Display used in the Note 8 with Samsung’s usual improvements in brightness and color. It sports a QHD+ resolution of 2960 x 1440 pixels that equates to 529 pixels-per-inch (PPI). The Galaxy S9+ still uses Samsung’s great Always-On display that hovers over the display with the time, day, date, battery percentage, and notification icons. This helps save battery life and allows the user to glance quickly at pending notifications to see if any require immediate attention. Gorilla Glass 5 protects the display and the entire device. Many critics were disappointed that Samsung did not increase the battery size on the new Galaxy S9+, but instead kept the non-removable 3,500 mAh capacity found in last year’s model.  However, with the improved power management of the new Snapdragon 845 it should be sufficient enough to make it through a normal day. When it does need a charge, there’s the option of choosing between Samsung’s Adaptive Charging and quick wireless charging.

The US version comes packing the popular Snapdragon 845 processor clocked at 2.8 GHz working with an Adreno 630 GPU for outstanding speed and graphics. Those Galaxy S9+ sold in other regions uses Samsung’s own octa-core Exynos 9810 processor and a Mali-G72-MP18 GPU. It packs 6GB of RAM and a base 64GB of storage, although certain areas you can order 128GB or 256GB of storage. All models include expandable storage.

Each time Samsung announced a new flagship, critics eagerly await to hear about dual cameras. The Galaxy Note 8 was their first attempt at dual cameras, so it was no surprise that the Galaxy S9+ also came equipped with a dual camera setup. It uses dual 12-megapixel cameras with improved Super Dual Pixels. It comes with PDAF, OIS, 2x Optical Zoom, 10x Digital Zoom, and LED flash. The biggest improvement is the new adaptive aperture on the main camera that goes from a small f/2.4 for bright situations areas to a large f/1.5 for low-light areas. The second camera has a fixed f/2.4 aperture and Live Focus for bokeh effects. The FFC is an 8-megapixel sensor with a fixed f/1.7 aperture that not only includes auto-HDR, but also includes its own autofocus for great selfies and video chatting.

Samsung is noted for the bloatware included on devices. While some prove to be useful — such as Samsung Pay and Samsung Health — others might not be to most users. Considering many users today are health-conscious, the heart rate sensor, SpO2 sensor, and the new blood pressure monitor will likely be of interest. Samsung improved its DeX option by only requiring a small dongle to turn your Galaxy S9+ into a desktop computer. As more appliances become ‘smart,’ Samsung is increasing usage of Samsung Connect on its smartphones. The device measures 158.1 x 73.8 x 8.5 mm and weighs in at 189 grams. It comes in Midnight Black, Coral Blue, Titanium Gray, or Lilac Purple, with Samsung having announced an additional Red version in China. Retail pricing ranges from $915 to $930, but there are usually quite a few promotions available.

LG is not shy when it comes to releasing a number of similar models each year and following the release of the AT&T-exclusive V35 ThinQ came the LG V40 ThinQ which has a larger display, two additional cameras, a new LG UX 7.0+, and a new Moroccan Blue color. The display still uses the preferred OLED technology and the QHD+ resolution. It uses the Snapdragon 845/Adreno 630 GPU – as does the Galaxy S9+. The LG V40 ThinQ is designed for a specific audience that loves good sound, cameras and playing with photos. The V40 ThinQ is priced around $980 although there are many deals going on making it much cheaper.

LG jumped the display on the V40 ThinQ up to 6.4-inches with a 19.5:9 aspect ratio, and kept the QHD+ resolution using an OLED display for better contrasts and blacker blacks. This produces a resolution of 3120 x 1440 pixels and a density of 537 PPI. Gorilla Glass 5 protects the device which includes support for Dolby Vision, HDR10, and a vague Always-On display for notifications to help save the battery.

Thankfully, this time LG was able to go with the best processor – the Qualcomm Snapdragon 845 and an Adreno 630 GPU for outstanding graphics when you are gaming or watching a video/movie with intense graphics. The SD845 is an octa-core processor clocked at 2.8 GHz, working with 6GB of RAM for great multitasking and 64GB of expandable internal storage to store all of your photos locally on your phone. LG kept the same 3,300 mAh capacity battery, and retained Quick Charge 3.0 and quick wireless charging.

LG completely revamped the camera area by including three main cameras and two FFCs. The primary camera uses a 12-megapixel sensor with a large f/1.5 aperture, OIS, Laser and PDAF and an LED flash. One of the secondary camera is also a 12-megapixel telephoto lens with an f/2.4 aperture, 2x Optical zoom, OIS, PDAF, and an LED flash. The third lens is 16-megapixels with an ultra-wide angle with an f/1.9 aperture, an LED flash, and no autofocus. The primary sensor is used for most of your pictures, but if you want a wider group or landscape shot, you can use the secondary lenses. LG did not forget the FFC by including two – one is an 8-megapixel sensor with and f/1.9 aperture and the second uses a 5-megapixel sensor and a f/2.2 aperture with a wide-angle lens. These are designed to capture better selfies and improve video chatting. Software is upgraded all around and it has an excellent manual mode.

The new LG V40 ThinQ is designed for those that are big on photography and music – the Boombox speaker is good, but you need to put on headphones to really hear how good the sound is. Fortunately, LG kept the 3.5mm headphone jack for just that purpose. Bluetooth is now up to v5.0 and NFC will allow you to perform mobile payments via Google Pay. The V40 ThinQ comes running on Android 8.1 Oreo, measures 158.8 x 75.7 x 7.6 mm, weighs in at 169 grams and comes in Aurora Black and Moroccan Blue. The device is now shipping for about $930 (list) for the 6GB/64GB model.

I have to chose the Samsung Galaxy S9+ as the winner of this comparison. Yes, the LG V40 ThinQ does have a medley of cameras, but its target audience is much smaller than those that will benefit from the powerful Galaxy S9+.

If you take away the extra cameras from the LG V40 ThinQ you will find a more feature-loaded smartphone in the Galaxy S9+. It has a more beautiful Infinity Display with the dual-curved edges, a great camera area, a larger battery, the heart sensor, oxygen monitor, DeX, Samsung Connect, and Samsung Pay.

Pricing is almost a dead heat and promotions are available on both models, so cost should not affect your decision. The Samsung Galaxy S9+ is a more well-rounded device that should satisfy the majority of users.