An infographic detailing most of the hardware and design specifications of the upcoming RED Hydrogen One emerged online, featuring information on its camera setup, storage configuration, choice of materials, and more. The RED Hydrogen One has had a bumpy ride so far, having been pushed back earlier this year and still missing its October 9 shipping date for customers who have pre-ordered it. The smartphone should still be released in the United States before the end of the year, or at least the aluminum-Kevlar variant shown here should.

According to the infographic, the RED Hydrogen One constructed from aluminum and kevlar will feature dual front-facing cameras with a resolution of 8.3 megapixels, as well as two 12.3-megapixel rear cameras coupled with an LED flash. Some of the key technologies highlighted by the infographic include A3D special surround sound, support for the H4V image format and a 5.7-inch 2D/holographic H4V display with a resolution of 2,560 by 1,440, leading to a pixel density of roughly 515ppi. The display will be protected by a sheet of Gorilla Glass and, unsurprisingly, the smartphone’s overall design doesn’t fit in the usual premium category of today. There’s no display notch here, while the upper and lower bezels are hefty and accommodate deep cavity stereo speakers along with the cameras and sensors. The back of the phone shows a visible Kevlar pattern and a prominent RED logo, as well as a Pogo connector for snapping on modules. Inside, the device conceals a 4,500mAH battery, 128GB of storage, and 6GB of RAM. The SoC is unmentioned but according to previous reports, the phone will likely employ Qualcomm’s Snapdragon 835 chipset, unless this has changed in the meantime.

While the RED Hydrogen One still hasn’t shipped to early adopters, the variant wrapped in aluminum and Kevlar was previously scheduled to launch through Verizon, AT&T, and Telcel on November 2, while the Titanium model is likely to hit the market in limited quantities next year. At the time of this writing it’s not entirely clear if the OEM will manage to hit its November mark, but whatever the case, more availability details should emerge over the next couple of weeks. This is the first smartphone created by the California-based professional camera manufacturer RED, and enthusiasts expect the Hydrogen One to push the boundaries of mobile photography and more, all the while offering new possibilities for VR, AR, and MR content. 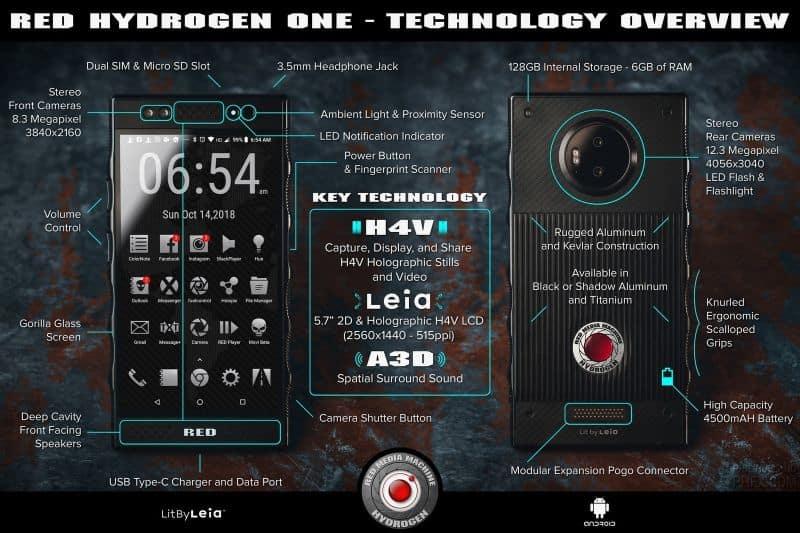