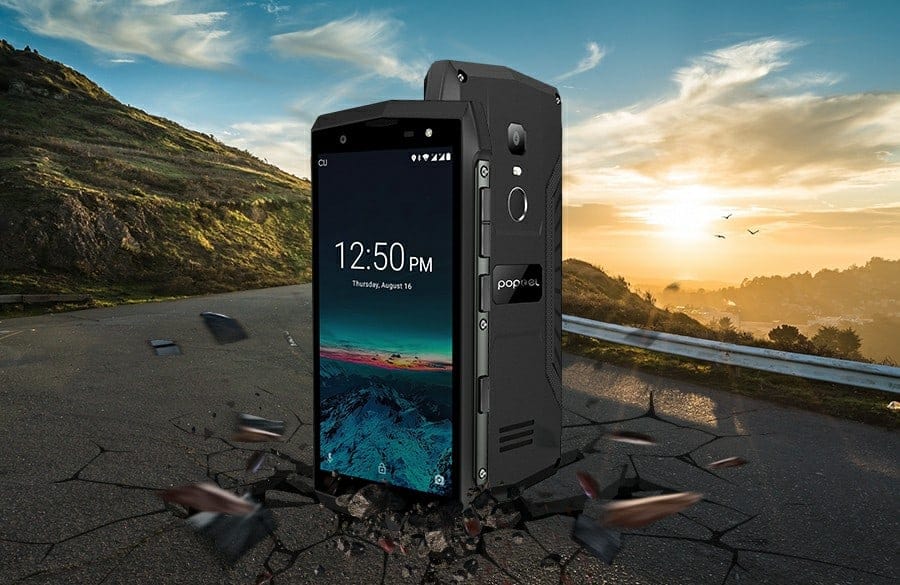 Poptel has just announced a brand new smartphone, the Poptel P8, following the Poptel P9000 Max and P10 which arrived in the last couple of months as well. The Poptel P8 is actually quite a compact smartphone, and this is a rugged phone that we're looking at. It's a rare thing to see these days, actually, small devices that are also rugged at the same time. This phone is IP68 certified for water and dust resistance, while the phone is also shockproof. The device does look rugged, as its shape is a bit odd, it has plenty of protection all around, and its screws on the back are quite visible.

The Poptel P8 features a single camera on the back, below which you will notice a dual LED flash, and a fingerprint scanner. Poptel's logo is also included on the back of this device, while the phone also sports an LED flash on the front. This smartphone comes with a 106dB speaker, and the phone supports facial scanning, which Poptel refers to as 'Face ID'. This smartphone features a 5-inch 960 x 480 display, which is the main reason why the device is rather small in the hand. MediaTek's MT6739 64-bit quad-core processor fuels this smartphone, while the device comes with 2GB of LPDDR3 RAM and 16GB of internal storage. You can expand the phone's storage, as the device comes with a hybrid dual SIM setup, one SIM card slot can accept a microSIM card or a microSD card, while the other one is made for either a microSIM or a nanoSIM card.

A 3,750mAh battery is included in this package, and it is not removable. That battery will last you for about 750 hours on standby, 17 hours of talk time, and 7 hours of video, says Poptel. An 8-megapixel camera sits on the back of this phone, while a 5-megapixel camera can be found on the front side of the device. Android 8.1 Oreo comes pre-installed on the Poptel P8, while the device does support 4G LTE (FDD-LTE B1/3/7/20). The device comes in Black, Green, and Yellow color variants, while it measures 152.2 x 73.3 x 16.1mm, and it weighs 231 grams. The device is now available for pre-order for $119.99 from AliExpress in all three colors, and as you can see this is an entry-level handset. If you'd like to know more about the device, check out the links that are provided down below.