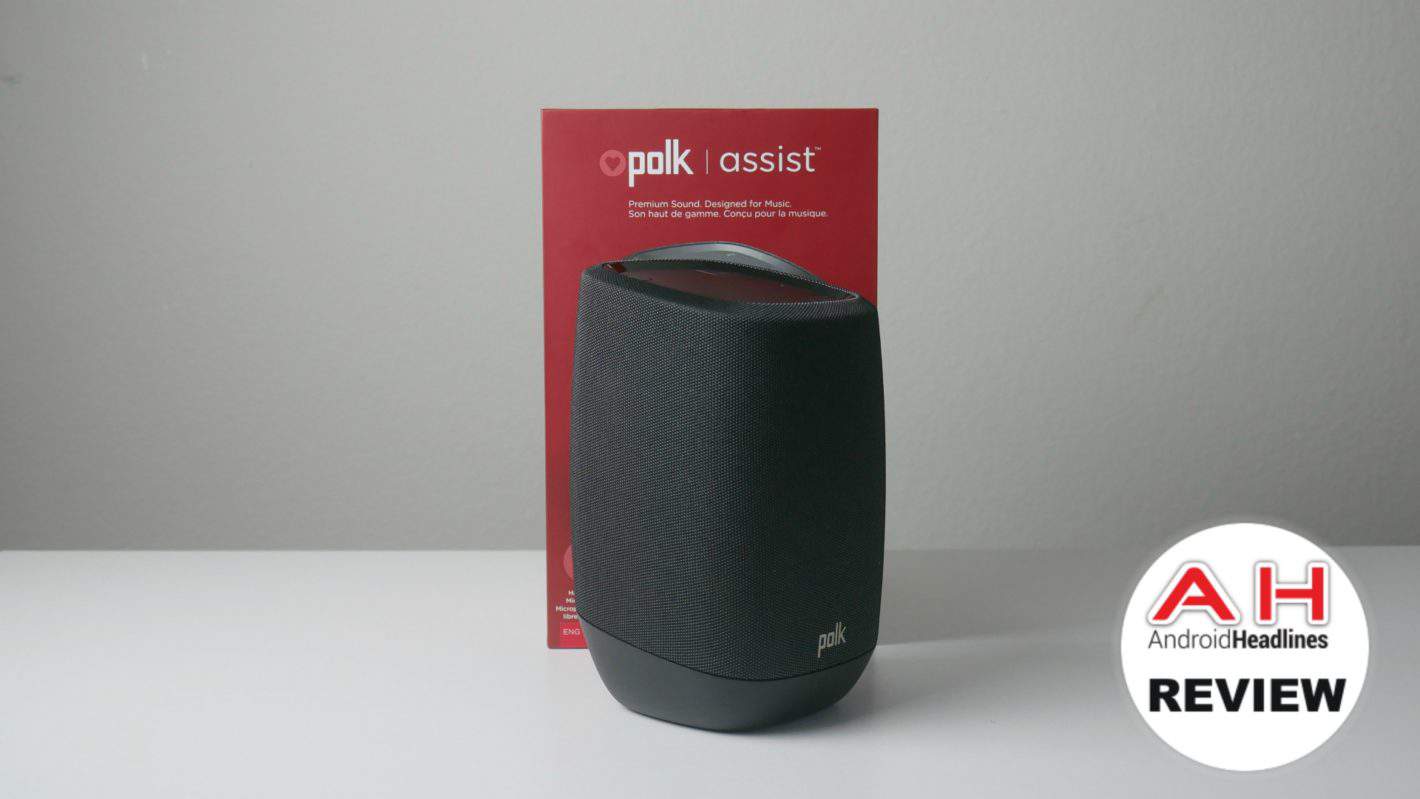 The Polk Assist gives Google a sound to be proud of

Polk Audio offers a number of audio-based solutions and some of which support various other technologies. The Polk Assist is a prime example with this being a speaker that's highly-tuned to Google's ecosystem, as it not only comes equipped with the Google Assistant but also Chromecast built-in to provide users with support for a number of third-party audio apps. The Polk Assist was first announced in May of 2018, is now available to buy from a number of online retailers, and costs $199.95 in the US.

The Polk Assist employs a two-way system made up of a 3.5-inch mid/bass driver along with a separate one-inch tweeter. Aspects including frequency response and sensitivity were not disclosed although the total output is understood to be 40-watts. The Polk Assist utilizes Bluetooth (version 4.2) for connectivity, in addition to Wi-Fi with support for both 2.4GHz and 5GHz networks. In terms of the physical dimensions, the Polk Assist measures 7.5-inches in height, 4.7-inches in width, 4.7-inches in depth, and weighs in at 3 lbs.

There is nothing too special with the unboxing experience as the Polk Assist is largely the only thing of note in the box. As a result buyers should expect just the bare essentials to be included, such as the smart speaker, the mains power lead, and the usual degree of paperwork.

So immediate design impressions is this is a speaker that is meant to look a little like the Google's Home line and quite likely due to, like the Home line, being a Google Assistant-equipped product. Where it does differ however is in terms of its customization, as in spite of the option of two different colors, the base cannot be removed or changed. Likewise, although there is color variations between the different elements, they are less varied than on Google Home with the Polk Assist utilizing more of a 'shades of gray' design. This is particularly true for the actual gray model, but equally as true for the black model due to its all-black design that only varies in the shade of black.

Another area where there is a clear difference is the top plate with the Polk Assist's top panel placing a much greater emphasis on buttons. Here users can expect to find the four most commonly-used buttons with one located in each corner for ease of use and separation. The two bottom-positioned buttons are the volume up and down buttons, while the top-right button offers play/pause functionality, leaving the top-left button exclusively for launching Google Assistant.

On the topic of Google Assistant, when the button is pressed (or a voice command given) four LED lights are used to denote the Assistant is listening and this is shown in the middle of the top plate in between the two microphones (one positioned on either side for greater listening). These LED lights are also in use to denote the volume level and adjust accordingly as the volume is changed either manually or by voice command. While this is largely the extent to the included manual controls, there's also one additional button hidden away on the bottom of the rear of the speaker. This is the mic cut-off button allowing users to disable the always-listening nature of the device for increased privacy, as and when needed.

Overall, the Polk Assist is designed to be a compact speaker, as in spite of its taller than usual size, it's very small and will neatly fit into the environment whether located within a greater home entertainment setup, positioned on a random table, desk, or anywhere else. Its design is also fairly minimalist which adds to its more discrete nature compared to the likes of the Google Home which is far brighter and more colorful – think of the Polk Assist as far more traditional in this respect. This is all while still sticking close to the identity now associated with the Home line of speakers. In other words, it's a Home speaker, but at the same time, it's not.

One area where the Polk Assist certainly does distance itself from the traditional Google Home is in the sound quality department. Which is probably to be expected considering this is a Polk Audio product. So in spite of this being a more expensive product than the likes of the Google Home, the sound quality is most likely what you are actually paying for here. As a result, you can expect a fairly good and robust sound output that is helped by the two-way system that's in use. As not only does the Polk Assist sport a larger driver than the Google Home (almost twice the size) but the inclusion of a dedicated twitter means the output is well balanced with tops far more prominent than you might find on other similar speakers.

The same can be said for the mids and bass to be honest, as this is a solid sounding speaker overall. Due to the size of the driver the bass is handled well and is even a little punchy at times. Likewise, the two-way system nicely ensures the mids are not too squeezed and makes their presence felt almost as well as the lower and higher ends. What's more important is the sound quality remains consistent as the volume increases which is not always the case with products like this, and certainly ones as small as this one. So as you do increase the volume you can do so knowing the sound wont be adversely affected. It sounds good at all volume levels and regardless of music genre.

If a criticism was to be leveled at the sound quality then it would be on the distribution front as this is not a massively impacting speaker. Of course, this is a small speaker and so its declining performance in this respect should not come as a great surprise, but it still should be noted. On it's own, the Polk Assist delivers a good sound but this is best served when in close proximity to the device and especially when in front of the front-firing speaker. The further you are away the less impressive the sound becomes and this issue is amplified when the distance is combined with any angle at all. It's just not meant to be a room-filling speaker and those looking for a one-speaker solution will want to ensure the Polk Assist is positioned correctly to optimize the listening experience. On a positive note, the Polk Assist does support multi-room playback so for those who are looking to add this speaker to an existing setup which involves other Chromecast-enabled speakers, they can.

There are no major issues or concerns with either the connectivity of the performance of the Polk Assist which during the review process proved to be a very reliable speaker overall. One of the major benefits of the Polk Assist is that it does not rely on the use of third-party software or apps to function. Instead, the Polk Assist can be set up and fully controlled by the standard Google Home app in exactly the same way Google Home speakers are set up and controlled. This makes initially setting up the Polk Assist a breeze and an experience that will be extremely familiar to anyone who already owns a Google-related speaker. Another of the benefits of this software approach is the updates for the product are likely to directly come from Google. This ease of setup also applies to the Assistant as once it's connected to your account it will already know your voice profile and migrate it over.

Unlike a number of other options, the Polk Assist is designed to be used as a stationary unit. While this won't appeal to those looking for an option that can be taken with them or just used in a standalone fashion, it does mean the experience is extremely reliable as it connects over Wi-Fi primarily (although there is also the option to use Bluetooth) and with Google Assistant on board the support for third-party apps is wide enough to make the speaker usable without having to connect a smartphone or cast content – though you can if you want, and reliably so. A point to note on the Assistant support is that the microphones were a little temperamental at times. To be clear, they did always hear when called upon but in some instances they would mishear what was asked. This usually occurred when the unit was already playing music (or a louder degree of background sound was present in the room), but it still happened often enough to be noted as something to be cautious of. Background noise aside, there were no issues in terms of the Assistant's hearing when the room was quieter and more optimal for a device like this. In all other respects the Assistant seemed to work fine and offers the typical and robust Assistant experience expected, including the option to control various other smart products in the home, provide feedback to any and all questions asked, set reminders, and so on.

One last point which might or might not be of concern depending on your audio needs is the Polk Assist does not actually feature any ports at all, including a 3.5mm socket. This means that you are unable to connect any analog devices in or out. It's pretty much just a wireless device and will only be able to connect to devices which adopt either Bluetooth or Wi-Fi.

The Polk Assist is an interesting proposition. There are far more affordable Google Assistant-equipped speakers on the market including those from Google, so interested buyers should not be considering this speaker just for the Google Assistant. However the audio quality on offer here is very good and that's really the main selling point. Although, even with the heightened sound quality taken into consideration, this is still quite an expensive speaker for its size, and there are better speakers available for the same money and especially for those who are less interested in the smart capabilities of a speaker. If, however, you are after a better-sounding speaker, which can also provide Google Assistant-related features and benefits, then the Polk Assist is one worth checking out. When both aspects are taken into consideration, and prove equally useful to the buyer, then the Polk Assist suddenly becomes a very good option compared to the rest. It does have some limitations that are a result of its general size, but even these limitations will likely appeal to those who are looking for a compact and somewhat discrete option. Therefore, if compact, Assistant-enabled, and good sound quality is what you are looking for, and in equal measure, consider the Polk Assist.

Buy Polk Assist Polk Assist (Polk Audio)
Advertisement
Trusted By Millions
Independent, Expert Android News You Can Trust, Since 2010
Publishing More Android Than Anyone Else
5
Today
84
This Week
365
This Month
4348
This Year
105825
All Time
Advertisement