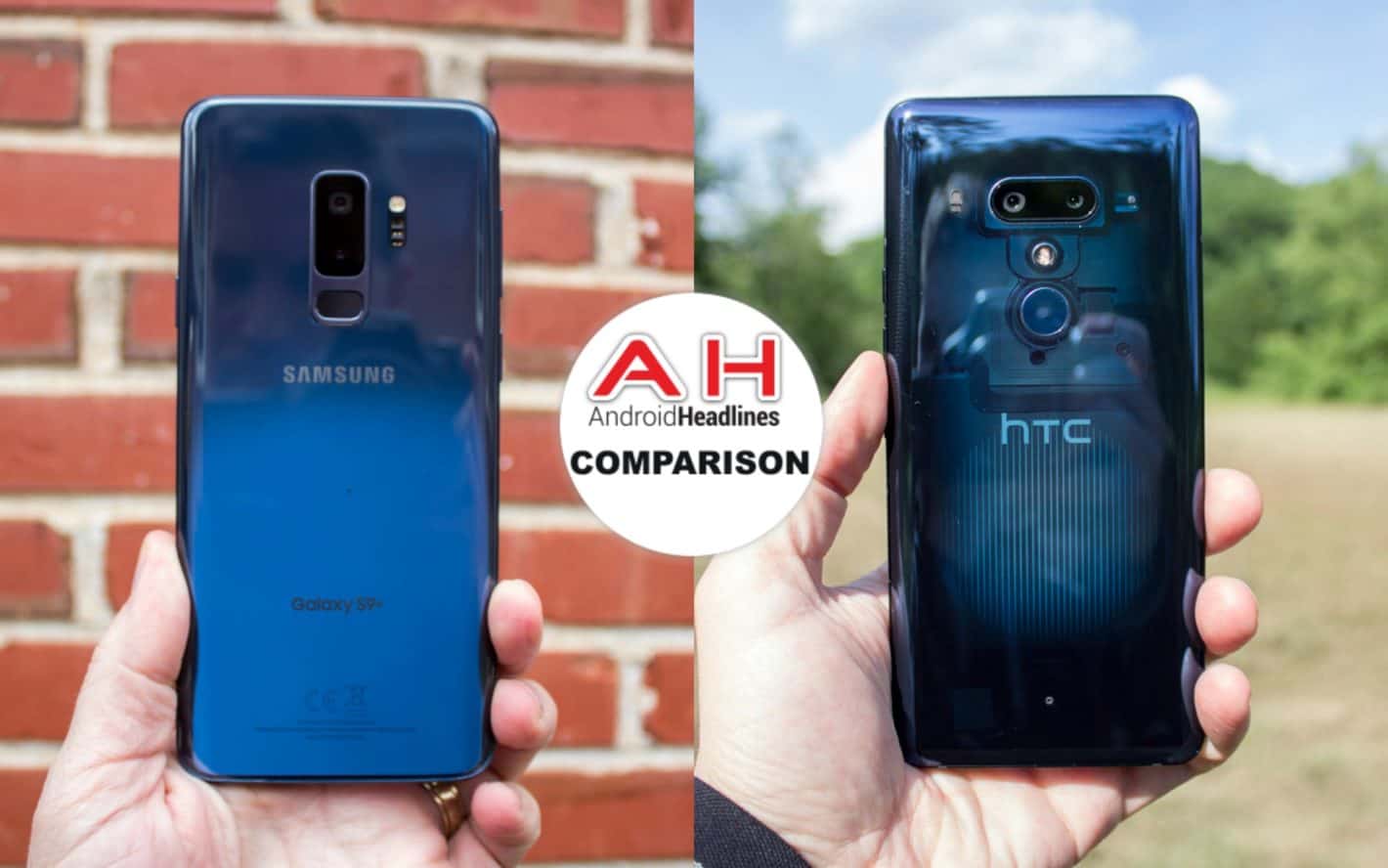 Do we have a good one for you today – the Samsung Galaxy S9 Plus takes on HTC U12 Plus. Both, physically beautiful in their in own right, and yet are very different in looks. The Galaxy S9 Plus certainly has more features, but also a higher price… do those features justify the higher selling price or would you be happy with the HTC U12 Plus and a few extra bucks in your pocket? One nice thing is that many carriers are offering big discounts on the Galaxy S9 and thus lowering its price. Most users want a great display, the best processor, lots of RAM, expandable storage, and a great camera – these two models will provide those. We will look at what these two devices have in common, and then after viewing the specifications, we will look at both devices in more depth to help determine the winner of this comparison.

There are several features that these two devices share. The displays are close to the same size, both offer a QHD+ resolution and an 18:9 aspect ratio, HDR10, and both use some sort of always-on support. The Galaxy S9 Plus and the HTC U12 Plus both use the Snapdragon 845 and the Adreno 630, along with 6GB of RAM and a base of 64GB of expandable internal storage. They both contain dual cameras with 12-megapixel main cameras, and although the U12 Plus has a dual front-facing camera (FFC) both of these devices use an 8-megapixel sensor. They use the same sized, 3,500 mAh non-removable battery and both offer quick charge support. Even their physical size is almost identical, as is their weight, and they both feature the usual suspects – Wi-Fi, NFC, Bluetooth v5.0, and a USB 3.1 Type-C port for charging and data transfer. Both offer Google Pay, Hi-Res audio with stereo speakers, IP68 water-resistance, and facial recognition. Both come with Android 8.0 that will be upgraded to Android 9 Pie, and both will work on all major US networks, except for the U12 Plus on Sprint’s network.

Please take a careful look at the detailed specifications comparison chart below and there you will see just how these two high-end Android smartphones stack up against each other. Which one is the better purchase by offering the most technology for the least amount of money? This is the type of questions we will attempt to answer.

Samsung did not make many major changes to the Galaxy S9 or S9 Plus this year since the company did a major overhaul on the Galaxy S8 series. It is now easier to pick up and hold the device without accidentally pressing an app and opening it. The biggest changes (and excitement) are in the addition of stereo speakers which contribute to an improved listening experience. Last year, the Galaxy Note 8 received dual cameras – a first for a Samsung device – and this setup migrated to the Galaxy S9 Plus. Intelligent Scan is a new addition that uses the Facial Recognition and Iris Scan simultaneously for a faster and more secure biometric unlock. The fingerprint sensor is now below the camera area to prevent less smudges on the camera lens. Samsung included AR Emoji – its answer to Apple’s Memoji – although it’s still largely considered a work in progress.

Stolen from the Galaxy Note 8, the new Galaxy S9 Plus uses the same sized 6.2-inch Super AMOLED Infinity Display. There are certainly improvements to brightness and color, but it remains with a QHD+ resolution of 2960 x 1440 pixels, and this equates to 529 pixels-per-inch (PPI). Gorilla Glass 5 protects the display and the entire device. The Galaxy S9 Plus uses the Always-On display that hovers over the display with the time, day, date, and battery percentage. This helps save battery life, but more importantly, it allows the user to quickly glance at their notifications to see if any need immediate attention.

Samsung continues its tradition of selling two models of its flagship smartphones – one for select regions including the US and one for other countries. The US version uses the same Snapdragon 845 octa-core processor clocked at 2.8 GHz and an Adreno 630 GPU found in the HTC U12 Plus. The Galaxy S9 Plus sold elsewhere uses Samsung’s own octa-core Exynos 9810 processor and a Mali-G72-MP18 GPU. Samsung upped the RAM to 6GB and the storage to 64GB, although there is also the option (in select regions) to purchase a 128GB or 256GB version. Regardless of which model chosen they all offer expandable storage.

As more manufacturers are using dual cameras on their smartphones, it had long been expected Samsung would add a similar setup to its flagships. The Galaxy Note 8 was the first to get dual cameras, and now the Galaxy S9 Plus is second on that list. Samsung took the Galaxy Note 8’s dual cameras and refined them before adding them to the Galaxy S9 Plus. The dual 12-megapixel cameras use improved Super Dual Pixels, and comes with PDAF, OIS, 2x Optical Zoom, 10x Digital Zoom, and LED flash. The biggest improvement is the adaptive aperture that goes from a small f/2.4 for bright situations areas to a large f/1.5 for low-light areas. The second camera has a fixed f/2.4 aperture and Live Focus for bokeh effects. The FFC is an 8-megapixel sensor with a fixed f/1.7 aperture that not only includes auto-HDR, but also has its own autofocus for great selfies and video chatting.

Bigger is not always better, and when it comes to battery size that saying could not be more true. Many critics were disappointed that Samsung did not increase the battery on the new Galaxy S9 Plus from the non-removable 3,500 mAh capacity found in last year’s model.  However, the Snapdragon 845 has improved power management built-in, as does the Galaxy S9 Plus, so you should make it through a normal day, and when a charge is needed the user does have the option of choosing between Samsung’s Adaptive Charging and quick wireless charging.

Samsung adds a lot of “bloatware” to its smartphones and some prove more useful than others, such as Samsung Pay and Samsung Health. There is also an increase in the number of hardware-related features on offer including a heart rate sensor, an SpO2 oxygen sensor, and the new Blood Pressure monitor. Then there is also the improved DeX support which with the help of a dongle turns a TV into a computer. While Samsung Connect allows you to connect to your Samsung IoT products, including appliances and thermostats. The device measures 158.1 x 73.8 x 8.5 mm and weighs in at 189 grams. It comes in Midnight Black, Coral Blue, Titanium Gray, or Lilac Purple, with Samsung having announced an additional Red version in China. Retail pricing ranges from $915 to $930, but there are usually quite a few promotions available.

Years ago, HTC made some very good-looking smartphones, and then they went all-metal starting with the HTC One series that delivered improved audio. This beautiful metal casing evolved for a few years, as did the company’s BoomSound solution. With the HTC U11, the switch was made to all-glass. The HTC U12 Plus is all-glass phone with a stunning design, but passed on the wireless charging feature found on other high-end smartphones made from glass. In addition, the U12 Plus is also missing other core features like a 3.5mm headphone jack. HTC also did away with the usual ‘clicking’ rocker buttons that we normally see – on/off and volume – and replaced them with a new smooth, ‘digital’ response button that responds based on how it’s pressed. Some of the more unusual features on offer include a dual FFC, allowing you to add a bokeh effect to selfies. HTC is selling the phone unlocked, but it will not work on the Sprint network.

HTC continues to use the LCD display technology rather than the better AMOLED, but the display does adopt a QHD+ resolution with 2880 x 1440 pixels, giving the HTC U12 Plus a 537 PPI. It stands at a perfect 6.0-inches with no notch. HTC uses an 18:9 aspect ratio that gives the smartphone a taller and narrower look, making it look larger and more modern. This ratio makes watching movies or video better, and if you use multi-windows for multi-tasking you will have 2 square windows to work in.

As with most 2018 flagships, the U12 Plus uses the Snapdragon 845 quad-core clocked 2.8 GHz. For graphics, the Adreno 630 GPU is used to handle anything from intense gaming to videos and movies. The HTC U12 Plus come comes packed with 6GB of RAM and 64GB of expandable storage. You can still order a 128GB model, but with cheap expandable storage, why bother? A large 3,500 mAh capacity battery powers the device, and it comes with Quick Charge 3.0 with 4.0 also available. Even though it has a glass back, the HTC U12 Plus does not support wireless charging.

When most manufacturers were raising their cameras megapixel, HTC decided to use its own UltraPixel – less pixels, but much larger, claiming you were getting the same clarity using less pixels. On the U12 Plus buyers will find the new UltraPixel 4 which includes 12-megapixels for the main camera and 16 for the secondary camera. The 12-UltraPixel 4 sensor has an aperture of f/1.8 and OIS to increase stability, as well as PDAF and laser autofocus. The secondary 16-UltraPixel 4 camera features an aperture of f/2.6 and 2x optical zoom, autofocus, and a dual-tone LED flash that works for both cameras. HTC uses a dual 8-megapixel sensors for the FFC that includes a bokeh effect and an f/2.0 aperture.

Designing a beautiful smartphone has never been HTC’s problem and the Flame Red and Translucent Blue are two striking models. The company introduced a curved back giving the user a better grip, which not only helps when picking up the phone but also when holding it for extended periods of time. The dual cameras are excellent, as are the BoomBox speakers. It does not have an AMOLED display, but it does have a QHD+ resolution. The improved Edge Sense is a worthy feature that can be quite useful, although removing the ‘clicky’ buttons might make it more difficult for some users to press the digital replacements. The device measures 156.6 x 73.9 x 8.7 mm and weighs in at 188 grams. It comes in Ceramic Black, Translucent Blue, or Flame Red. It will cost you $799 for the 6GB/64GB version and $849 for the 6GB/128GB version.

The HTC U12 Plus with its Gorilla Glass 3 design does include a number of additions, such as dual front-facing cameras, improved Edge Sensor, Amazon Alexa, and pressure-sensitive buttons, although the improved Galaxy S9 Plus is still the winner of this comparison. With its Gorilla Glass 5 design, Super AMOLED display – still the best in the business – quick wireless charging, Samsung Pay, Samsung Connect, 3.5mm headphone jack, FM radio, DeX capability, Iris Scan, Intelligent Scan, heart rate monitor, SpO2 sensor, and the ability to work on all major US carriers, it’s the better phone overall, and for only about $100 more it’s the better buy.