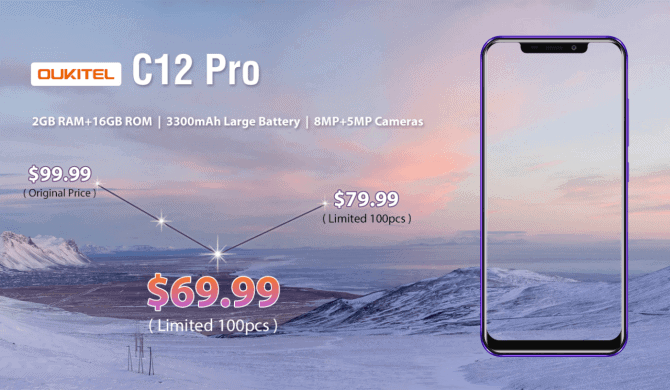 If you’re looking for a budget new smartphone, you’ll be glad to know that the OUKITEL C12 Pro is now discounted on Banggood, priced at $69.99 (limited to 100 units), as part of its promotional pre-order period. This entry-level handset will cost $89.99 or $99.99 after its pre-order period ends. This discount will last until October 16, so if you’re looking to purchase the OUKITEL C12 Pro, it may be wise to act fast. In addition to discounting the phone, OUKITEL is also giving one buyer per day (until October 16) a chance to get the phone for only $6.99. The company is calling this a ‘Snap Up Sale’, and you have a chance to get the phone for only $6.99 every day until October 16 starting at 10AM UTC+8, all you need to do is be the first one to purchase the phone. It is also worth noting that if OUKITEL ends up selling over 100 units at $69.99, additional 100 units will become available at $79.99, as long as that happens before October 16, of course.

The OUKITEL C12 Pro is a smartphone which sports a display notch, while it also comes with a ‘chin’ below its display. The phone also sports two cameras on the back, and below them, you’ll notice a fingerprint scanner. The OUKITEL C12 Pro is fueled by the MediaTek MT6739 64-bit quad-core processor, while it also includes 2GB of RAM and 16GB of internal storage. The phone features a 6.18-inch 960 x 480 display, while it also comes with a 3,300mAh battery. The phone supports microSD storage expansion, while Android 8.1 Oreo comes pre-installed on the device. This phone also brings support for two SIM card slots, and it supports 4G LTE connectivity (FDD-LTE).

In case you’d like to take advantage of this offer, hit the link down below, as the company has already sold almost 100 devices at $69.99, so you may want to hurry up if you’re interested. You’ll also find a link down below which shares more info about the device itself.