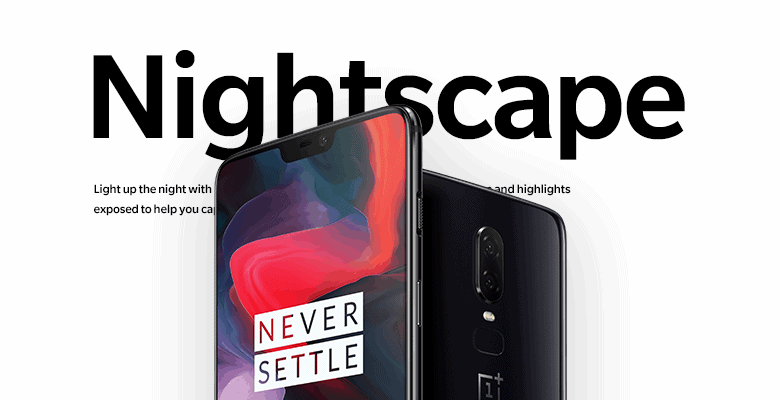 A bunch of OnePlus 6T's features have just landed on the OnePlus 6 thanks to a new Open Beta update that the company has started pushing out. The company has announced via its official forums that the Open Beta 6 update for the OnePlus 6 has started rolling out, and it brings both Nightscape and Studio Lighting camera features to the device. Nightscape is a much-talked-about OnePlus 6T mode that should boost image quality in low light scenarios, and it's not surprising that it arrived to the OnePlus 6 so soon, as the OnePlus 6 has the exact same cameras as the OnePlus 6T. On top of those two camera features, this beta update also brings new navigation gestures to the device, which essentially means that you will be able to swipe from the center to the upper right corner in order to swiftly switch between the last two apps you've used. This is only applicable if you're using OnePlus' very own gesture-based navigation, of course. On top of that, you're also getting the ability to hold the power button for 0.5 seconds in order to activate Google Assistant.

Background: The OnePlus 6T got announced a couple of days ago in New York, and the company has promised that the new software features will arrive to the OnePlus 6 really soon, maybe even within a week. Well, considering that an Open Beta update is already out, the stable release is probably not far off, as long as the company doesn't find any notable bugs in this update, of course. The OnePlus 6T has a lot of similarities with the OnePlus 6, in addition to the same camera sensors that we've already mentioned, the device also comes with the same RAM setup, and the same processor. The general build is quite similar as well, though the OnePlus 6T does not sport a fingerprint scanner on the back, and it has a much smaller notch than the OnePlus 6.

Impact: The Nightscape mode should help with low light photography, while Studio Lighting should improve some photos as well, though we're yet to test both of those features. It's good to see that OnePlus is pushing out all of these features to the other 2018 flagship so soon. If you're running previous Open Beta software on your OnePlus 6, you will get this update OTA, though do keep in mind that you will not get stable updates if you are running Open Beta software, so once the stable build is out, it may be wise to switch to a stable channel.