Motorola is reportedly working on a new smartphone for its popular mid-range G series allegedly called the Moto G7. Marketing material for the unannounced device seems to have leaked, thanks to HowToTechNaija, which reveals some of the key specifications expected for the Moto phone. The display is mentioned to measure 6.4 inches with a Full HD+ resolution of 2,340 x 1,080 pixels, that accounts for a much taller aspect ratio of 19.5:9. Smartphone makers usually deploy such tall displays to accommodate a notch, which is a possibility for the Moto G7 either. An unspecified octa-core processor powers the phone and the report speculates it to be the Snapdragon 636, which, despite being a year old, is a serious upgrade over the Snapdragon 450 SoC found inside this year’s Moto G6.

The mid-tier handset will include 4GB of RAM and 64GB of onboard storage, as per the leak, and Motorola may also make it available in multiple additional RAM and storage configurations. It will likely support dual-SIM capabilities along with a slot for memory expansion using a microSD card. Android 9 Pie is said to come pre-installed on the handset, which was somewhat understood since the phone isn’t supposed to be out for the next several months. Coming to the camera department, a pair of a 16-megapixel and a 5-megapixel camera will be placed on the back, while a single 12-megapixel sensor will be found on the opposite side. A fingerprint scanner is mentioned to be a part of the package, though its placement hasn’t been specified in this leak. Finally, the Moto G7 may come equipped with a larger 3,500mAh battery when compared to its predecessor’s 3,000mAh one.

Lenovo’s subsidiary unveiled the Moto G6 series earlier this year in April and its follow-up is expected to go official during Q1 2019. Until recently, Motorola was hailed for its swift delivery of firmware and security updates even to its older-generation smartphones. But in the last few months, the company seems to have lost track in this regard resulting in a backlash from its users. The Chinese brand recently tried to mend the situation with the Android One-powered Moto One series that is supposed to receive newer software updates following the Pixel-branded phones. 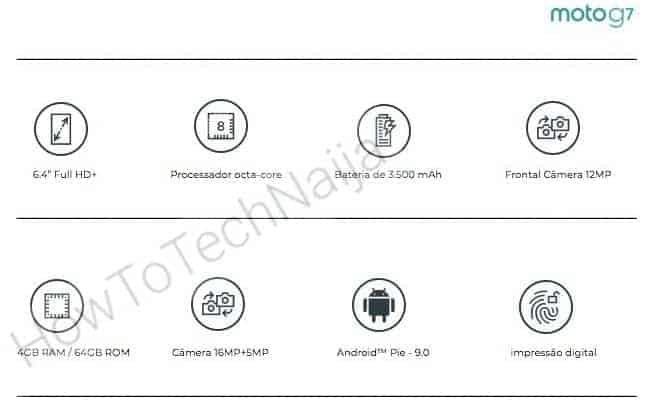