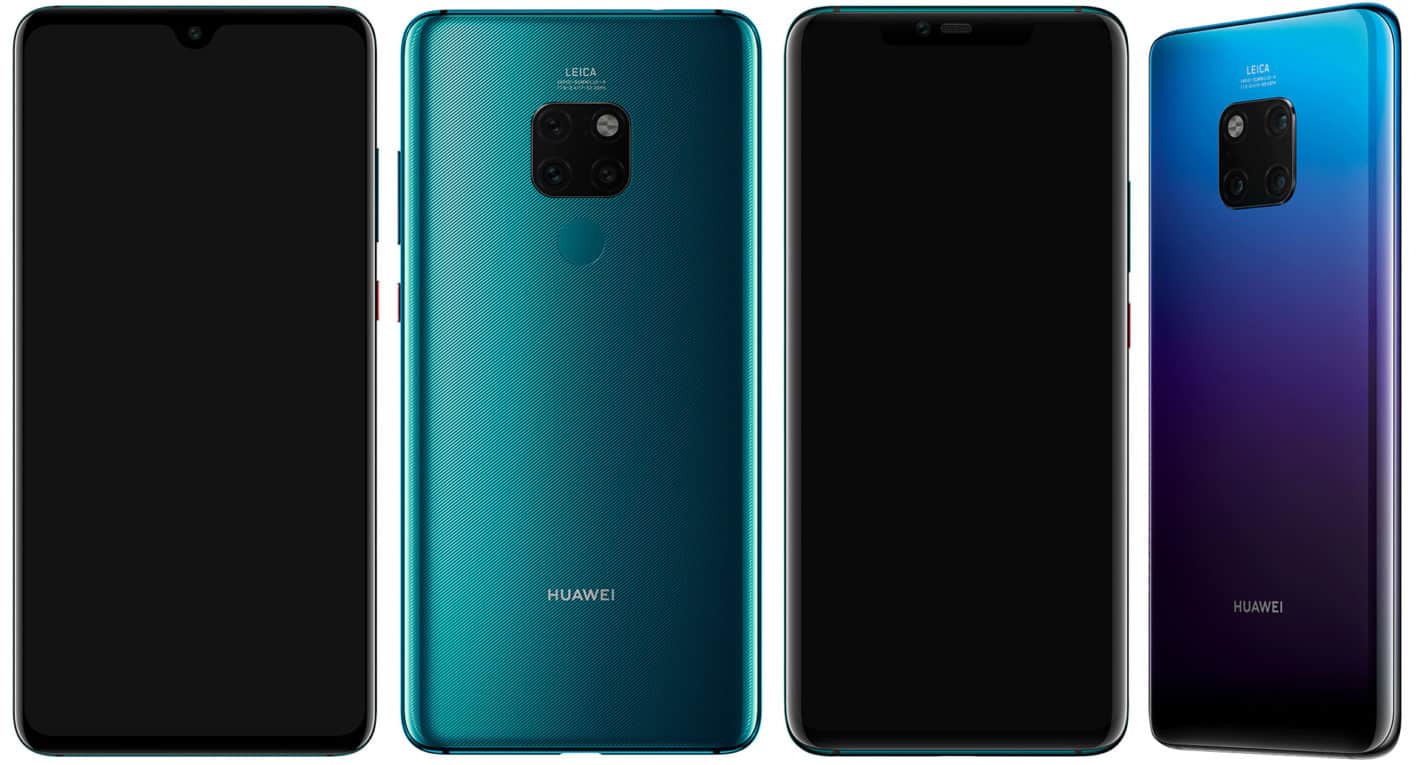 Huawei on Tuesday officially announced the Mate 20 series following months of what turned out to be highly accurate rumors and leaks. The company’s latest lineup of Android flagships consists of the Mate 20 and Mate 20 Pro (as well as one surprise model) which are direct follow-ups to the 2017 Mate 10 and Mate 10 Pro and are unsurprisingly advertised as the ultimate ultra-premium smartphones of the year, featuring the very best of what the mobile technology industry can currently offer, or at least that’s what Huawei claims. Whether that ends up being the case remains to be seen but here’s everything there is to know about these now-official Android gadgets:

Doubling down on glass

Huawei is doubling down on the glass-centric aesthetic with the Mate 20 lineup as both of its latest devices feature an eight-edge curved glass body which is meant to provide them with a “sophisticated profile” and one that’s instantly recognizable, especially when paired with the unique rear camera setup that’s dissected further down below. The final finish Huawei ended up commercializing is something the company refers to as a “hyper-optical pattern” which feels like glass but isn’t as slippery and is harder to smudge with fingerprints. AndroidHeadlines understands the latter part has to do with a new type of oleophobic coating Huawei used for its latest flagships but the company has yet to elaborate on the matter.

Besides their sizes, the biggest visual difference between the Mate 20 and Mate 20 Pro is that the former barely features a notch, with its cutout being minimal and waterdrop-styled, housing only a single front-facing camera. The Mate 20 Pro is more akin to the P20 series in terms of notch size and features a sizeable cutout, though one that houses a larger camera sensor and a wide variety of other modules which are meant to make up for its physical footprint. Coupled with five available colors and slim aspect ratios, the Mate 20 and Mate 20 Pro leave little to be desired from a design perspective and are as modern as contemporary smartphones come.

That ‘Pro’ moniker doesn’t mean what you think it means

The industry kind of conditioned consumers to expect every Plus- and Pro-branded smartphone model to be a bigger counterpart to a smaller sibling but HTC broke precedent with its U12 Plus earlier this year and now Huawei is doing the same. So, the Mate 20 Pro is actually the smaller member of the new family, featuring a 6.39-inch (QHD+) screen as opposed to a 6.53-inch (FHD+) one. Its aspect ratio is also amazingly tall at 19.5:9, whereas the Mate 20 features an equally unconventional 18.7:9 image format, whereas both the FullView Display of the former and the Dewdrop Display of the latter were designed and built specifically for these two handsets.

The Mate 20 is 158.2 x 77.2 x 8.3mm in size, while the Mate 20 Pro measures in at 157.8 x 72.3 x 8.6mm. They’re almost identical in terms of weight, tipping the scales at 188g and 189g, respectively, and are virtually the same as last year’s Mate 10 (186g) in that regard. Both devices offer 128GB of storage expandable by up to 256GB via a microSD card slot and a maximum of 6GB of RAM. The Kirin 980, still the most powerful mobile chip on the market (at least until Qualcomm and Samsung release their new silicon in the coming weeks), is powering both handsets and is said to be up to 40-percent more capable than the Kirin 970 found inside last year’s Mate 10 line. With a maximum clock speed of 2.6GHz for its high-performing cluster of two Cortex-A76 cores and not one but two neural processing units for artificial intelligence computing, on-device AI and other demanding tasks such as gaming should be a breeze for the Mate 20 and Mate 20 Pro. Finally, the Mate 20 Pro also ditches the IP53 water and dust resistance certification in favor of a more durable IP68 rating, meaning this device can actually be submerged in water with no issues.

The best-ever mobile camera just got even better

The P20 Pro introduced the world’s first mainstream triple-camera setup designed for a smartphone and the Mate 20 lineup is embracing that change even further, or at least the Mate 20 Pro is. The regular Mate 20 still sports a three-lens Leica system but one that’s less capable than what Huawei already delivered, featuring a 16-megapixel ultra-wide-angle camera (17mm, f/2.2), a 12-megapixel wide-angle one (27mm, f/1.8), and an 8-megapixel telephoto module (52mm, f/2.4) with optical image stabilization and 2x optical zoom. This should still be one of the most versatile mobile photography solutions on the market but the Mate 20 Pro is where the real fun and state-of-the-art tech is at.

The more capable handset uses a Leica-made triple-camera setup that’s extremely similar to the one from the P20 Pro in terms of sensor resolution but has been made even more powerful with the addition of an ultra-wide-angle (16mm, f/2.2) lens. A massive-resolution 40-megapixel camera (27mm, f/1.8) is still part of the package, though you won’t be shooting 40-megapixel images by default due to their size, as is an 8-megapixel sensor sitting behind a telephoto lens (80mm, f/2.4) which supports both OIS and 3x optical zoom. If the P20 Pro still has the best rear camera system in the mobile industry, the Mate 20 Pro just managed to make that impressive solution even better and more suitable for landscape photography as well as a number of other shooting scenarios, including macros.

Naturally, Huawei’s AI is still an integral part of the company’s smartphone photography equation so if having a handset that recognizes scenes with machine learning and optimizes your imaging options accordingly sounds like your cup of tea, you’re going to be thrilled with the Mate 20 line. Even if it doesn’t, it’s something you should surely experience and see for yourself how far your consumer electronics can currently go in the cutting-edge-tech department. The front cameras of both handsets are highly capable, featuring 24-megapixel sensors (the Mate 20 Pro has a slightly larger pixel size) and f/2.0 lenses that should be more than enough to enable the full potential of your selfie game.

AI is also a core component of EMUI 9, Huawei’s implementation of Android 9 Pie that promises to be smarter and more intuitive to navigate than the company’s last firmware build. The tech giant claims its latest software is up to 51-percent faster than the one pre-installed on the Mate 10 and Mate 10 Pro, as well as up to 400ms faster to respond than any other Android implementation on the market. Location settings got simplified for privacy reasons in EMUI 9, whereas many functionalities have been consolidated to facilitate navigation. GPU Turbo 2.0 is also part of the package, here to make your gaming experience even smoother.

On the security side of things, the sizeable notch of the Mate 20 Pro is justified with the inclusion of a dot projector and an infrared camera allowing for 3D face unlock comparable to Apple’s Face ID and the biometric solution used by Xiaomi’s Mi 8. So, regardless of whether you grow a beard, wear a hat or glasses, put on contact lenses, or have more makeup than usual, you should be able to reliably unlock your Mate 20 Pro at a moment’s notice by simply glancing at it. If facial recognition is not your cup of tea, Huawei also equipped its latest Android flagship with an in-display fingerprint reader said to be much faster and accurate than the one found inside the Mate RS Porsche Design (though it’s still of the optical and not ultrasonic variety). While the Mate 20 features a regular fingerprint reader on the back, that one should be the fastest such sensor Huawei ever commercialized and both devices are compatible with the company’s Password Vault that can store all of your passwords locally in a cryptographically secure manner.

A battery that learns (faster than before)

The Mate 20 features a 4,000mAh battery that’s identical to the one found inside both Mate 10-series devices, whereas the Mate 20 Pro offers a 4,200mAh cell. While that’s not a massive improvement, Huawei’s algorithms that learn one’s usage habits and optimize battery performance accordingly are said to be much smarter this year, so your new handsets should be even better at providing you with more usage time on a single charge the more you use them. Both use Huawei’s SuperCharge technology as well, with the Mate 20 supporting a 22.5W solution, whereas the Mate 20 Pro cranks that power up to 40W. The more powerful handset also supports 15W wireless charging and has the ability to function as a wireless charger itself, so you can use its massive-capacity cell to refuel your smartwatch, another smartphone, or any other compatible gadget (this trick also works with the Samsung Galaxy Note 9, AndroidHeadlines can confirm). 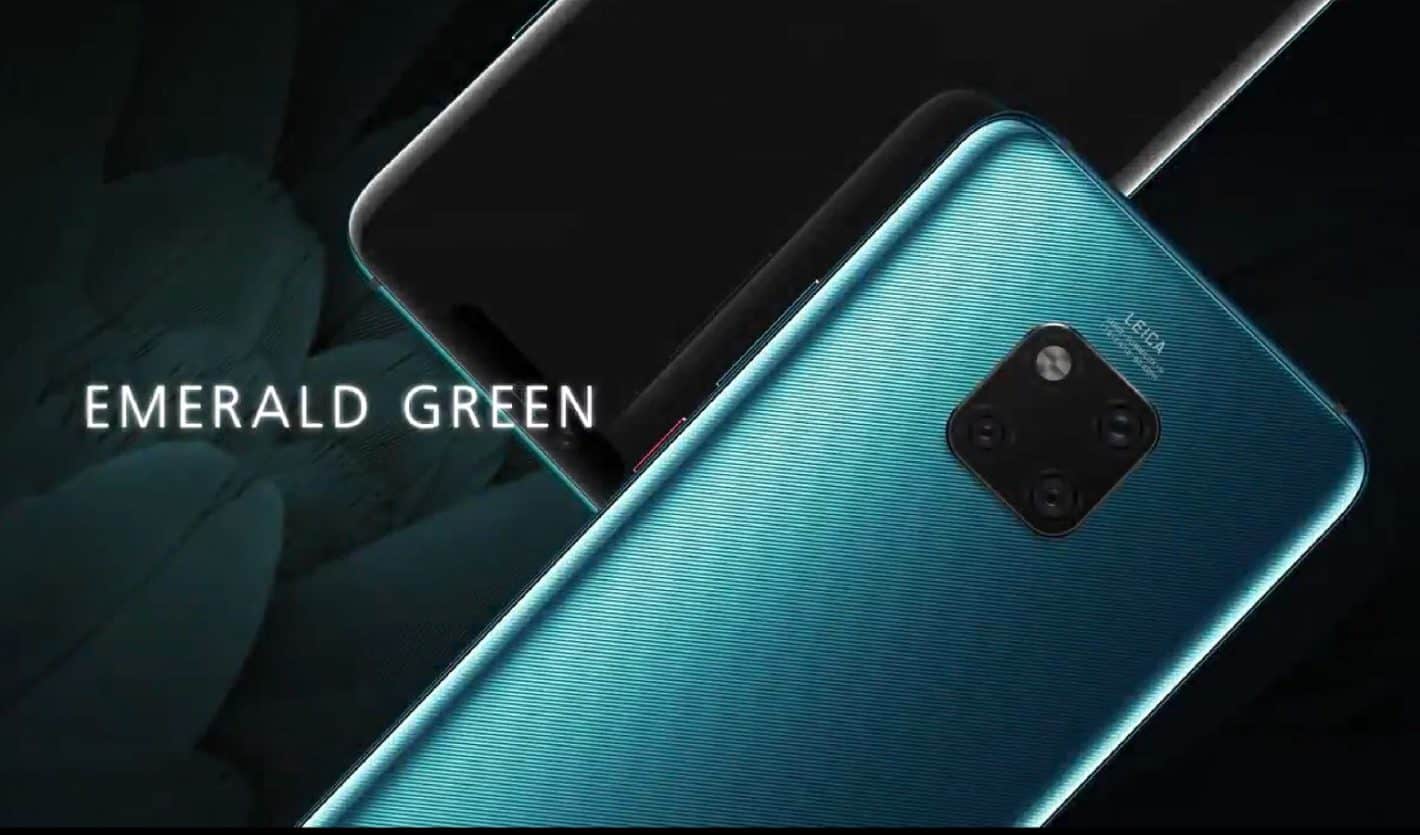 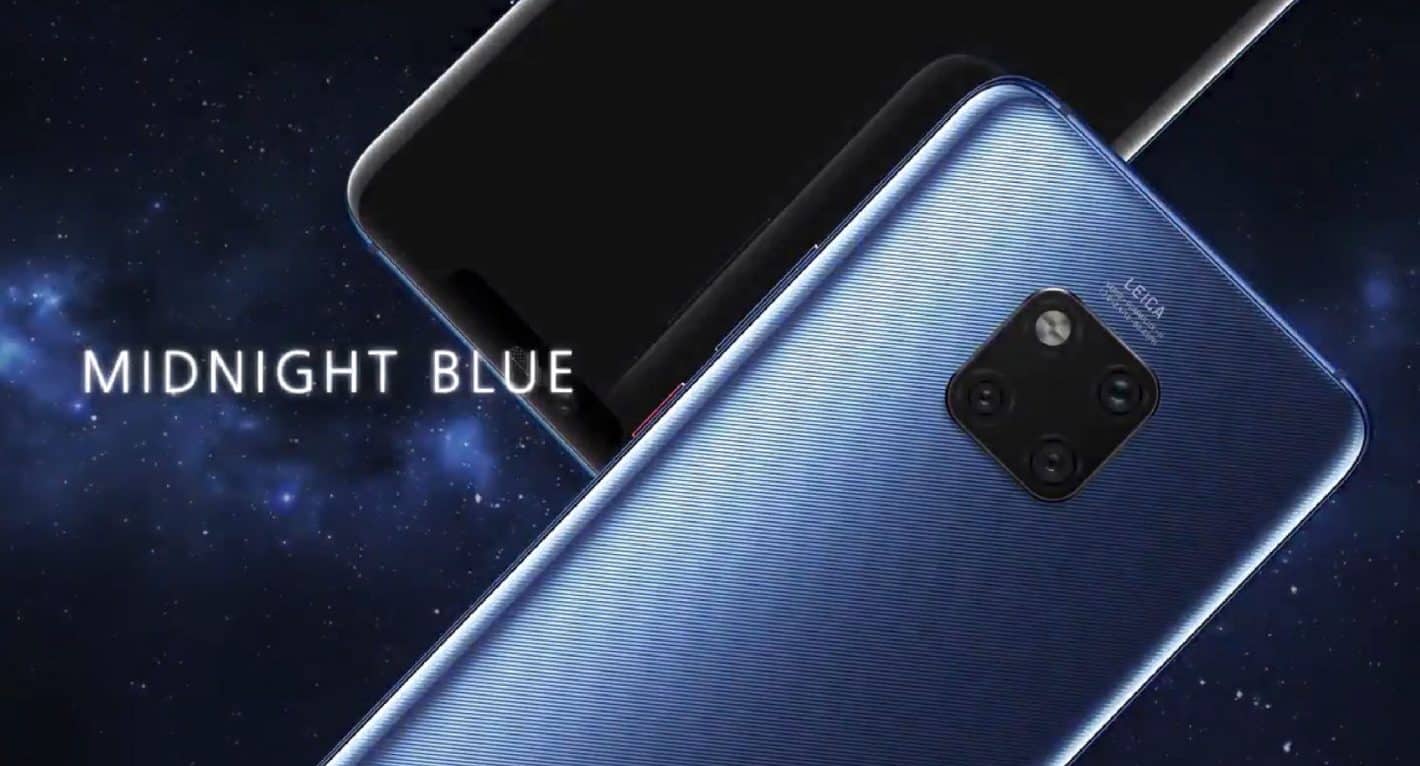 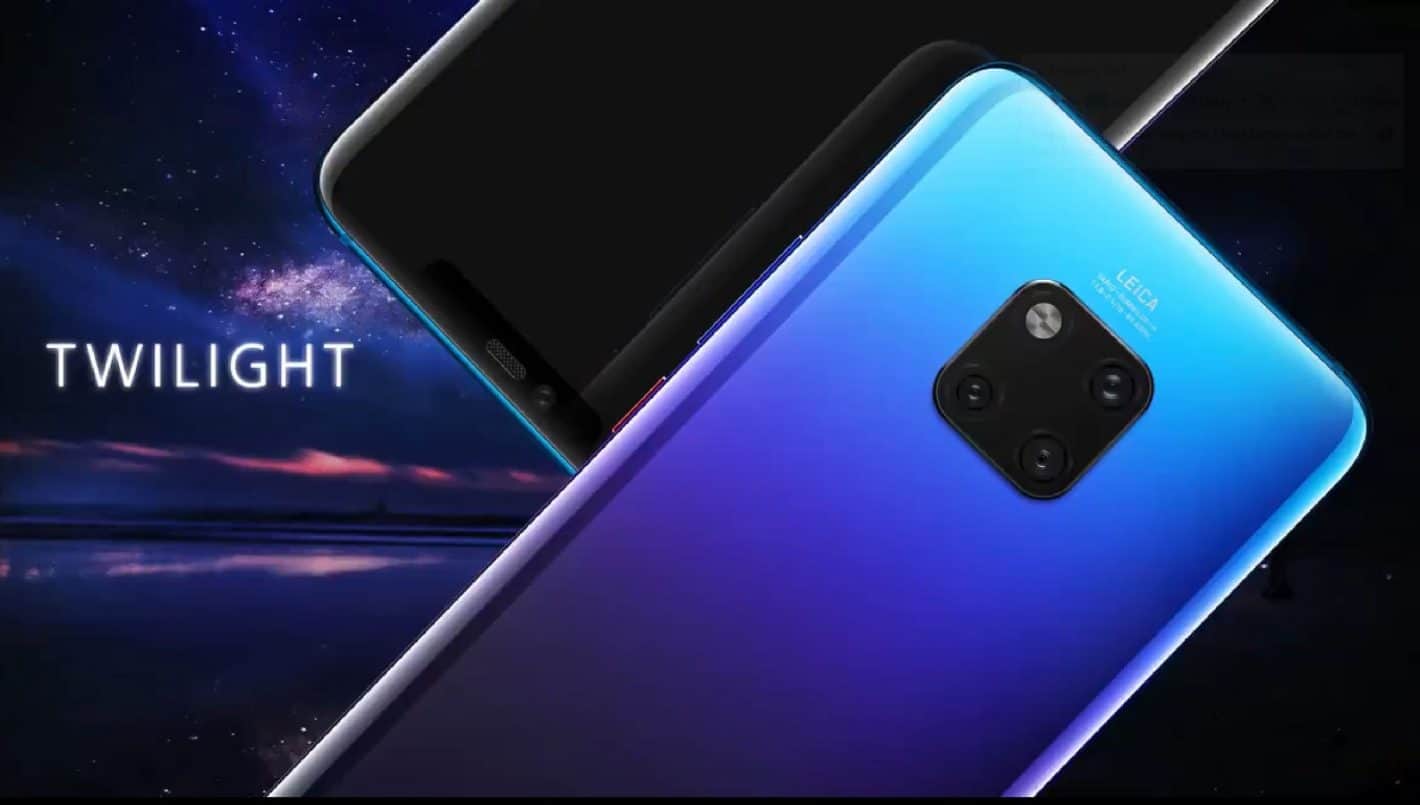 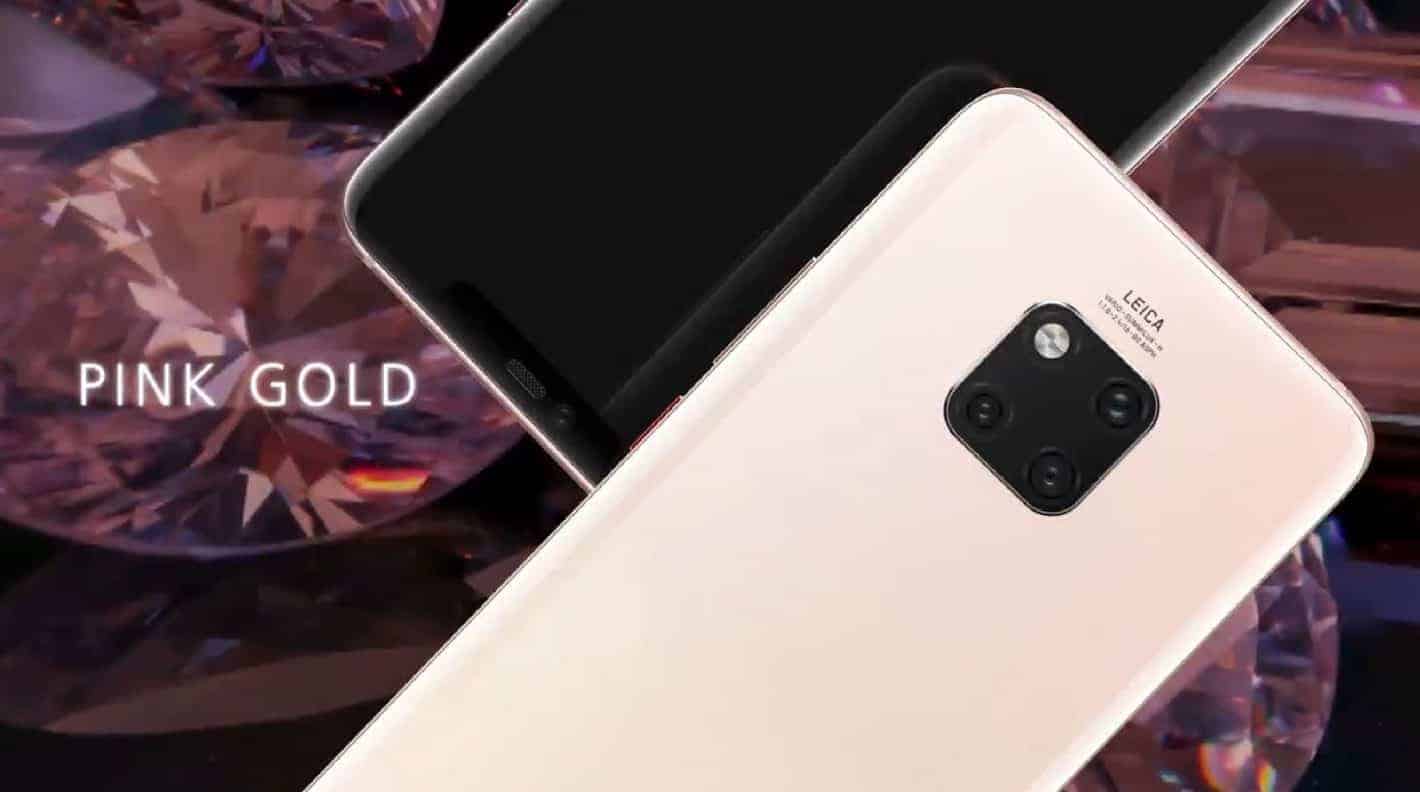 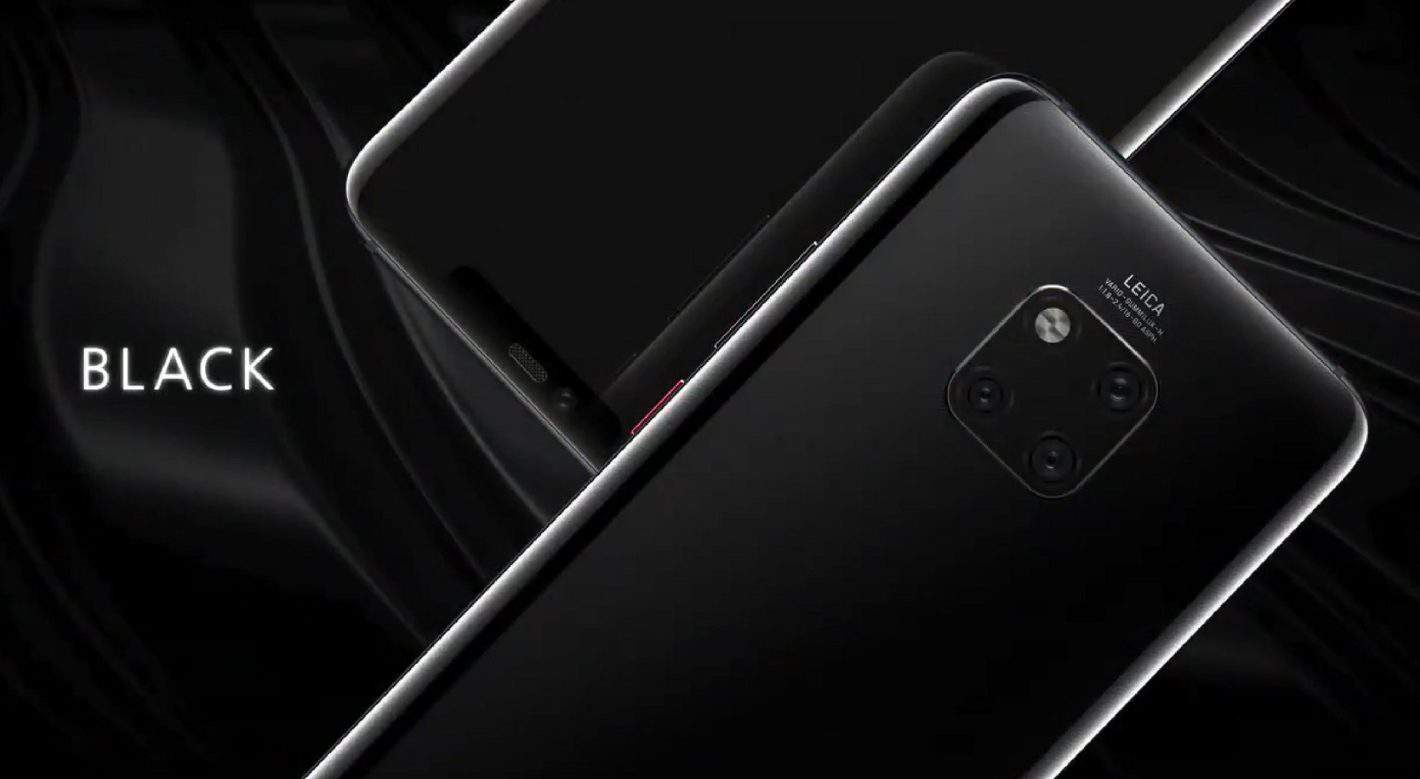 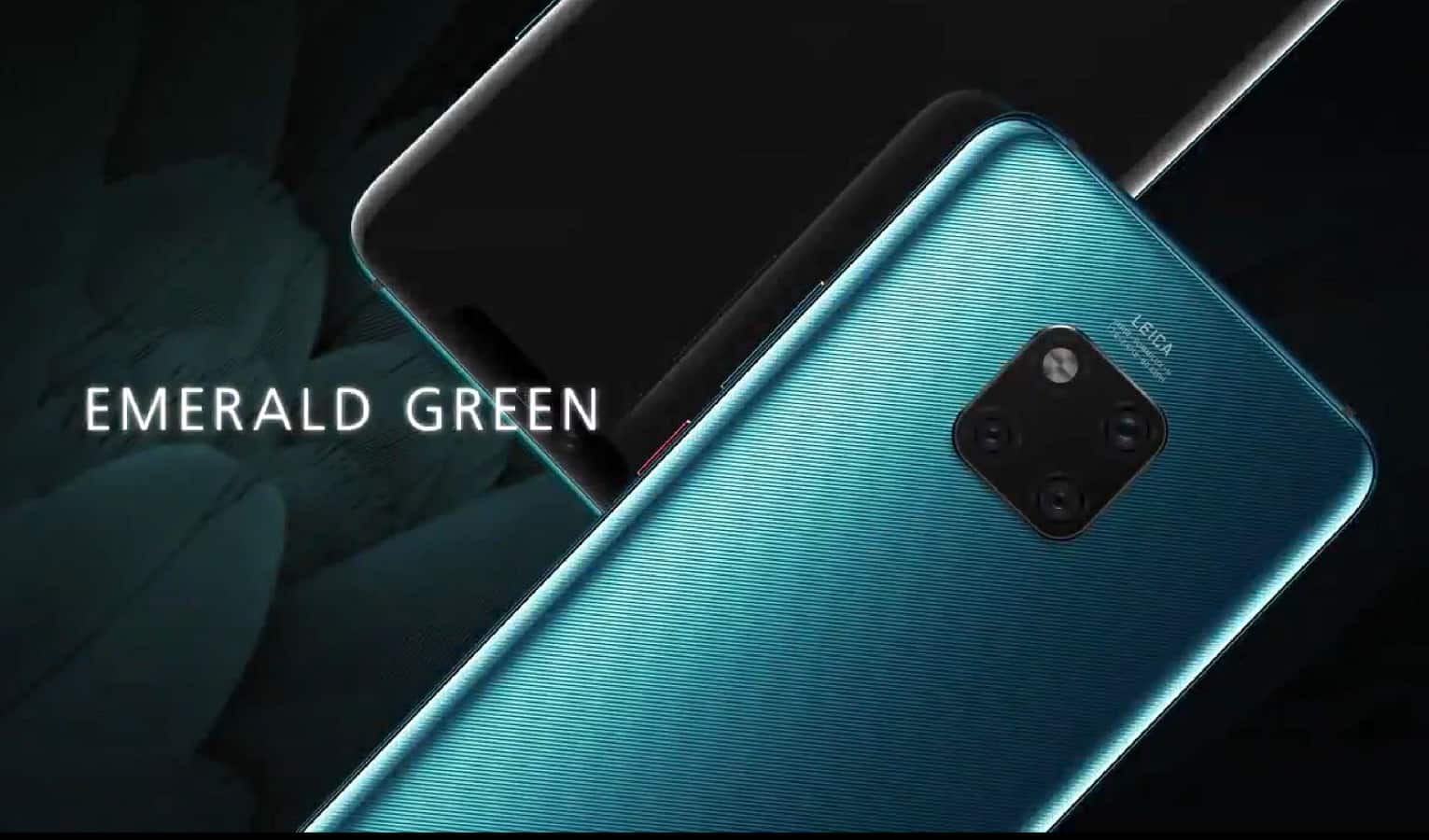 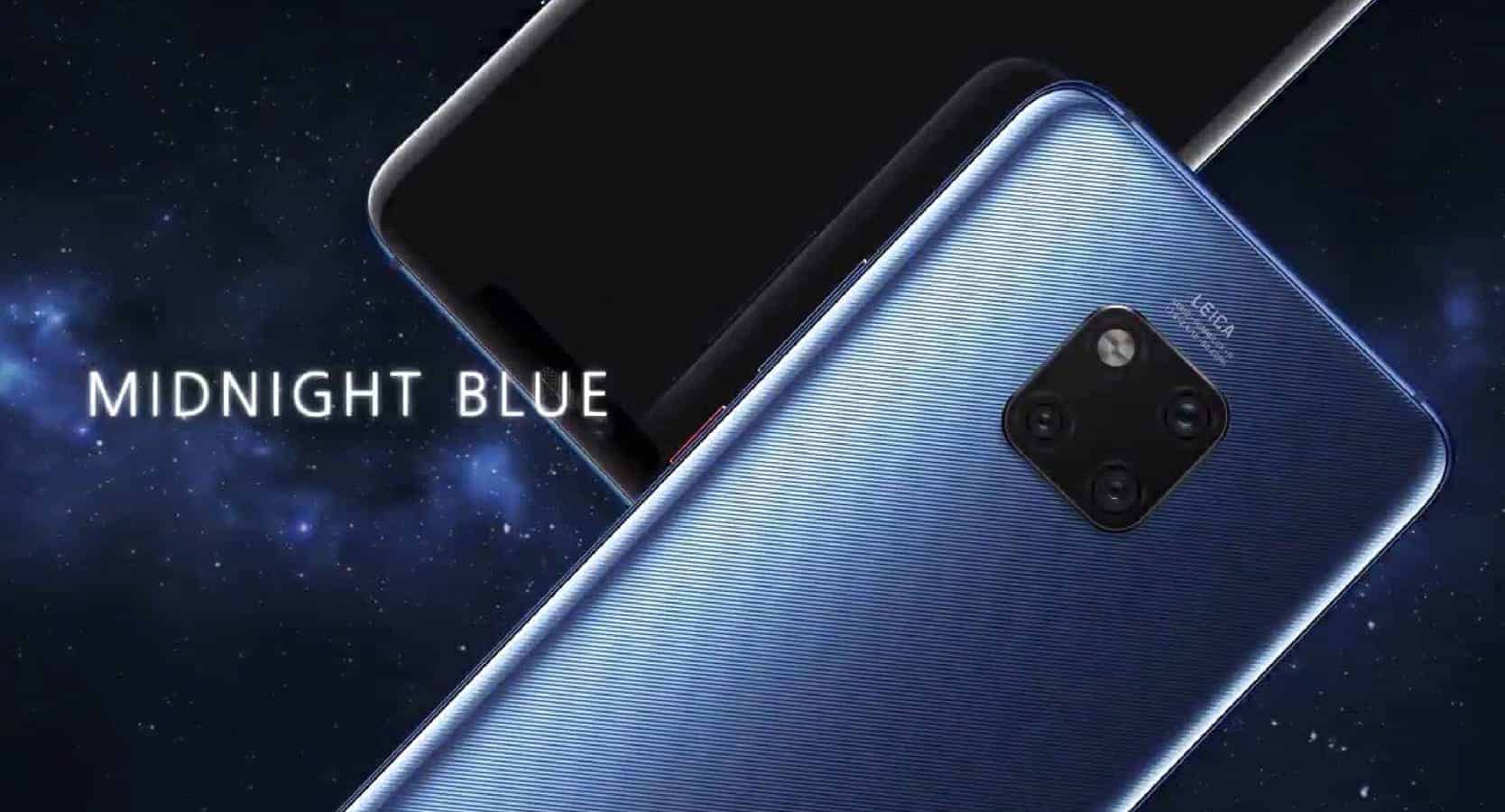 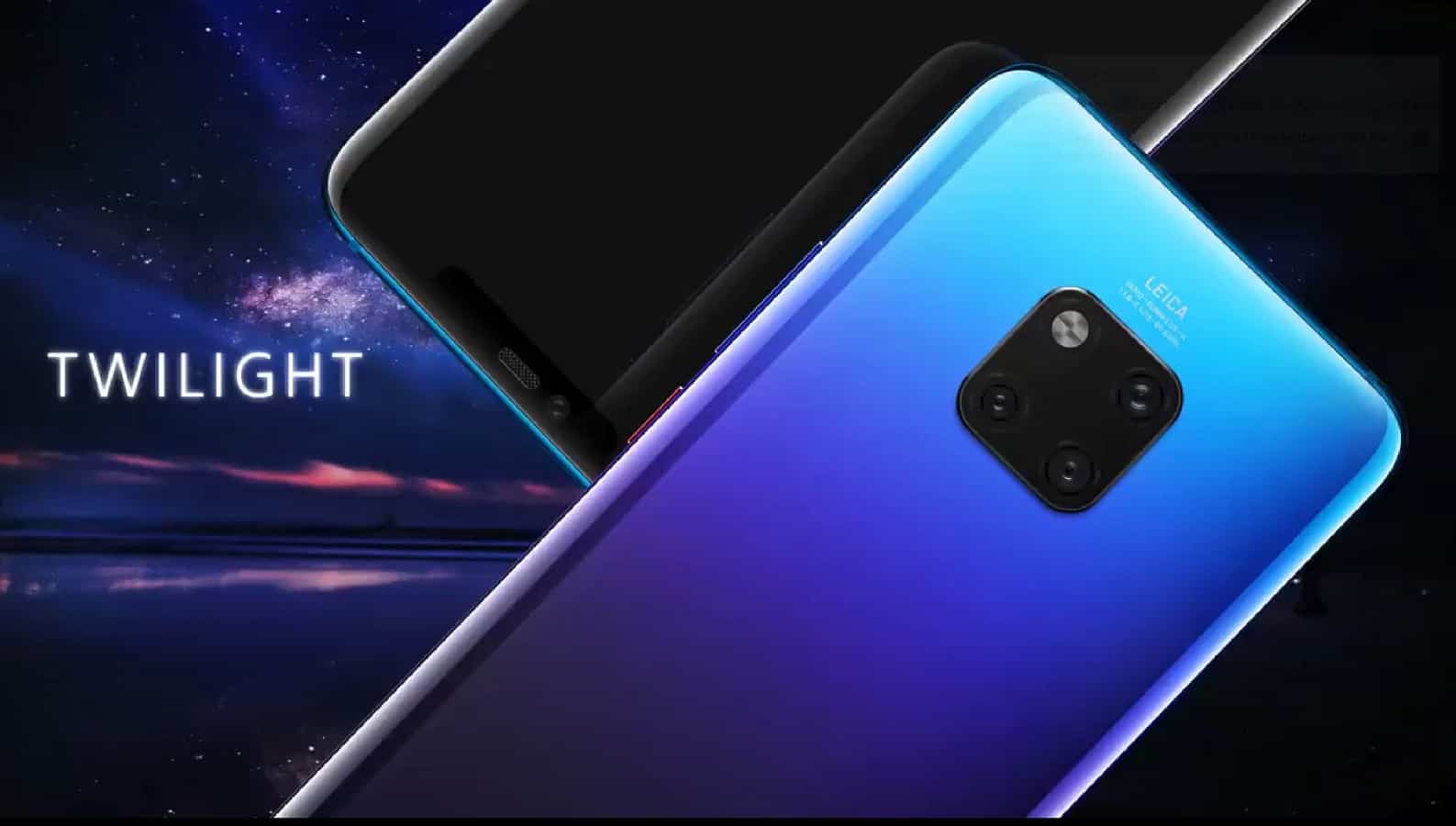 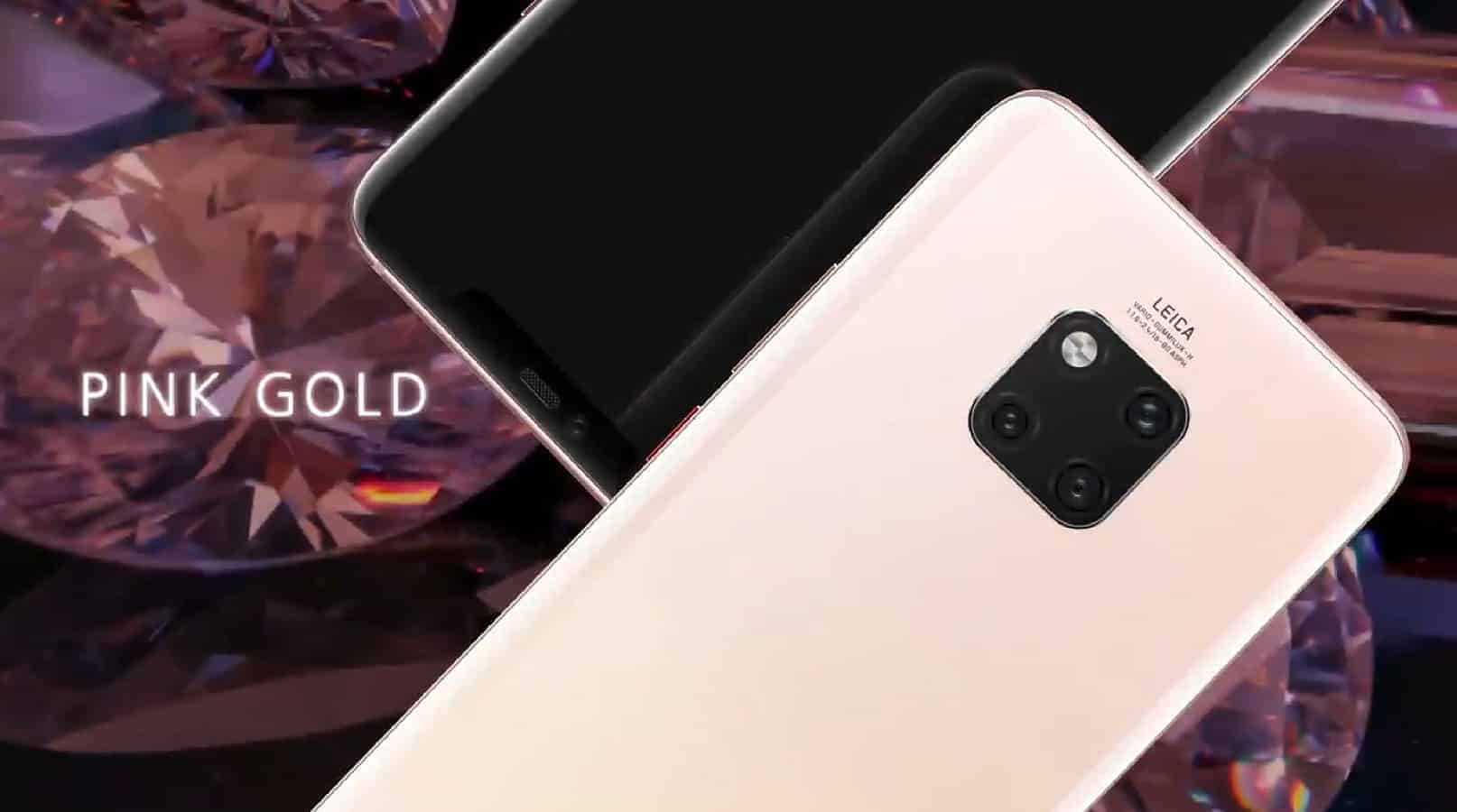 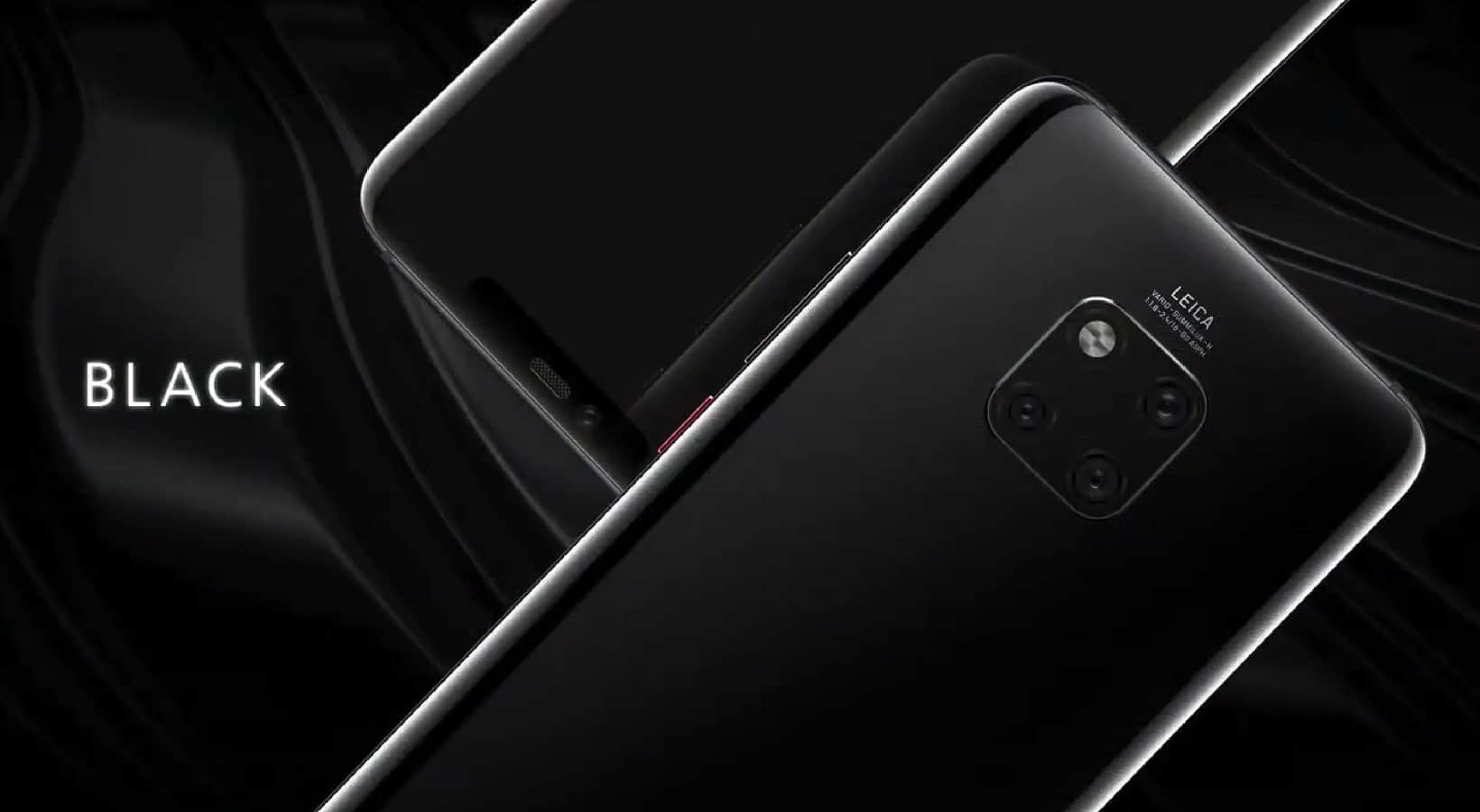 Both the Mate 20 and Mate 20 Pro will be available in five color options: Emerald Green, Midnight Blue, Twilight, Pink Gold, and Black. The latter will only be offered with 6GB of RAM and 128GB of flash memory, whereas prospective buyers of the former will have a choice between that configuration and one with 4GB of RAM. While the company has yet to clarify whether both Mate 20 memory options will be available in all five colors, that seems to be the case, even though consumers in select markets may not have access to all of them. Still, as far as variety is concerned, there’s something for everyone here, and the unique Twilight finish is once again the highlight of the new lineup after already giving the P20 line a bit of extra oomph earlier this year.

Finally, there’s the Mate 20 X and Porsche Design Mate 20 RS, with the former being a gaming-focused version of the Mate 20 with a 5,000mAh battery, 7.2-inch screen, and a graphene-vapor cooling system meant to offer longer sustained performance, whereas the latter is an ultra-luxurious take on the Mate 20 Pro that’s technically not part of the new lineup, so AndroidHeadlines is covering it separately.

… provided you’re not in the United States, that is

Unsurprisingly, Huawei has no intentions to bring the Mate 20 lineup to the U.S. While the last several generations of this series were officially available stateside through Amazon and Best Buy, the company’s tense relationship with Washington, Capitol Hill, and select American companies has now culminated and the tech giant scrapped plans to release the Mate 20 family in the U.S. in January, which is what industry watchers expected it to do based on its established product practices, i.e. what it has been doing in previous years. One small bit of good news is that if you still end up buying a Mate 20-series device through a third-party reseller or simply import it, the Android smartphone will work with all GSM networks (like those from AT&T and T-Mobile) in the country and Huawei will honor your warranty without demanding you take any extra steps, a company official confirmed to AndroidHeadlines. The Mate 20 will start at €799, whereas its stronger variant will retail at €849 in Europe, with both being set to become available for orders as of today. The Mate 20 Pro will go for €1,049, with the gaming-focused Mate 20 X being set for a release on October 26, priced at €899.