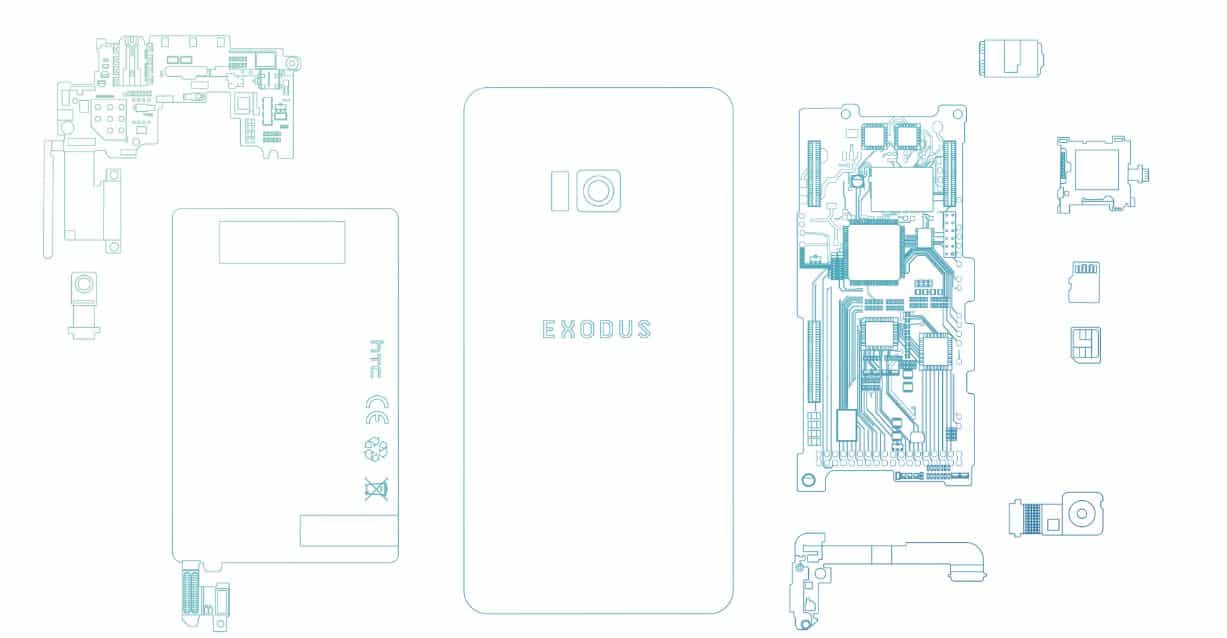 In Short: HTC has just confirmed via Instagram that it will announce its first Exodus blockchain smartphone on October 22. The company has confirmed the news via a short video teaser, which not only confirms the phone's release date, but also confirms that the phone will have somewhat thin bezels (even though we didn't get a good look at them), while it seems like a curved glass will be applied on top of the phone's display as well. That is pretty much all the info that the company shared via Instagram, and it also reconfirms fall release for the phone, which is something HTC already announced, and what we'll talk about in a second.

Background: Last month, HTC's executive, Phip Chen, confirmed that the HTC Exodus will start shipping in December this year. Having that in mind, it seems like the phone will not exactly become available soon after its announcement, as it will take HTC over a month to start shipping it to consumers. Back in May, HTC did release some information about this smartphone, and aside from being your secure digital wallet, you will also be able to use it as a vault or sensitive info, said HTC. HTC had partnered up with Cryptokitties for the Exodus project, as the non-fungible token (NFT) game will come pre-loaded on the phone. The HTC Exodus will also serve as a node for Ethereum and Bitcoin, while it will also come with support for the Lightning Network, which is a payment protocol that supports multiple transactions across different nodes, in case you didn't know. The company said that the HTC Exodus will be an extremely secure solution that will try not to overcomplicate the blockchain and security tech that is included in the device.

We don't really have any detail regarding the phone's build, other than what HTC released via Instagram, and that's not much. Aside from the fact that the phone will have thin bezels, and quite probably curved glass on the front, we don't know anything at this point. We can assume, however, that the HTC Exodus will be made out of metal and glass, and that it will sport at least two cameras on the back. A fingerprint scanner will probably be included on the back of the device as well, and it remains to be seen if some sort of facial scanning will be included here, and it's possible that it will, as this is basically a security smartphone, so HTC will probably look to include as many such tech in the device as possible. You can expect the HTC Exodus to be a rather large device, we've seen quite a few large smartphones being released to the market in the last couple of years, and this phone quite probably won't be an exception, as it's expected to sport a display that will measure at least 6 inches in diagonal, but it remains to be seen what exactly is HTC planning. The Snapdragon 845 64-bit octa-core SoC is quite probably the processor that HTC will look to for this phone, and the device will quite probably ship with either 4GB or 6GB of RAM on the inside, probably the latter, though.

Impact: The HTC Exodus is still quite a mystery, as the company did not release all that much info about the device, so it's more or less a guessing game at this point in time. Speaking of which, rumors are suggesting that this will be quite an expensive smartphone, some even claiming that it will cost $900-$1,000, though there's no proof to confirm that fact, of course. The 'Exodus' will be a different smartphone, that's for sure, and considerably different than anything else HTC released thus far. This won't be a smartphone that will aim for the general consumer or anything of the sort, but rather people who are a bit panicky when it comes to security, and those of you who are into cryptocurrencies. The HTC Exodus won't be the first smartphone of this kind out in the market, though, there are several other options out there, but not many, though. The first phone that comes to mind, as a competitor to the HTC Exodus, is the Finney smartphone from Sirin Labs. That is a dual-screen smartphone which is heavily focused on security, and it comes with decentralized app stores (same as the HTC Exodus), cold-storage wallets, and so on. Speaking of which, the Finney blockchain smartphone is currently available for pre-order, for those of you who are interested, just head over to Sirin Labs' website.

HTC's smartphone business isn't exactly booming, the company has been losing money in the smartphone department for quite some time now, and the question is how long will they be able to keep things going at this rate. The HTC U12 Plus is the company's current flagship, and a really solid smartphone according to many news outlets, including us, but that phone is not selling as well as the company had hoped, and that goes for pretty much every device HTC released in the last year or two. HTC is releasing far less devices these days than it used to a couple of years ago, and it seems like the company is focusing on its flagship device(s), and some out-of-the-ordinary smartphones, like the HTC Exodus. The HTC Exodus is not a smartphone that will attract a ton of people, and the company is quite probably not expecting that to happen, as this phone will aim for a specific type of customers, and in the end, it will not improve HTC's standing in the mobile department all that much. HTC is putting a lot of faith in the HTC Vive line of devices, as it sees virtual reality as the future, basically. When HTC sold a part of its mobile hardware team (those that were working on Google's Pixel phones) to Google a while back, it seemed like the company is getting ready to stop manufacturing smartphones, but HTC denied that, as the company is still alive and kicking in that department. Needless to say, the HTC Exodus will be an interesting phone, and everything will be revealed on October 22.