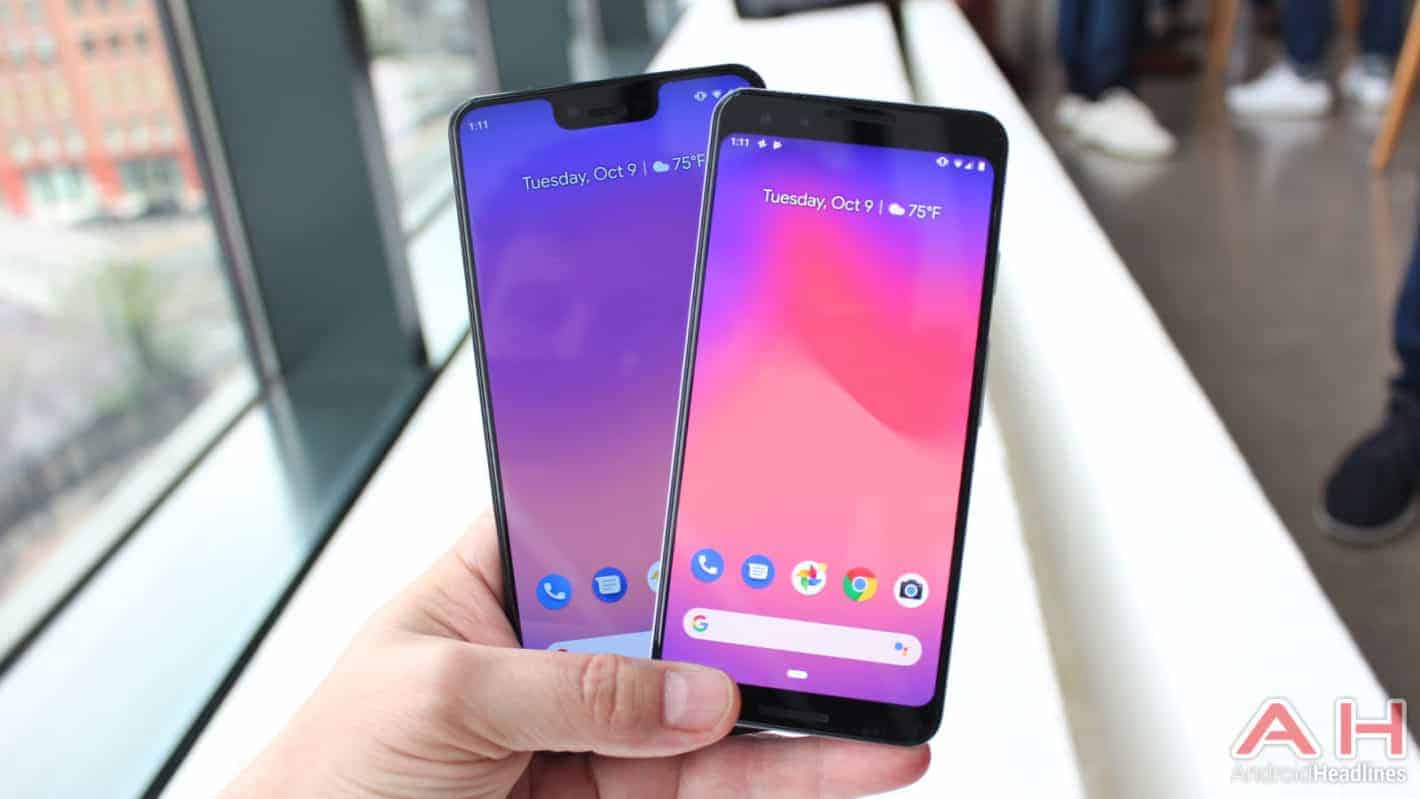 The Pixel 3 and Pixel 3 XL are mostly the same smartphone, besides the display and battery capacity. The Pixel 3 sports a 5.5-inch full HD+ OLED display with a 2915mAh capacity battery, while the Pixel 3 XL has a Quad HD+ OLED display, with a 3430mAh capacity battery inside. Otherwise, both smartphones sport the Qualcomm Snapdragon 845 chipset, with the Pixel Visual Core for the camera. There is also 4GB of RAM with 64GB or 128GB of storage. There is no micro SD card slot here, as has been the case with Google smartphones for many years. And the trend of no headphone jack is also here, but there is at least a USB-C to headphone jack dongle included in the box. And Google also includes a pair of USB-C headphones in the box. When it comes to cameras, there is a 12.2-megapixel sensor on the back, with dual 8-megapixel sensors on the front. One of the front sensor is a wide-angle lens with a 97-degree field-of-view, versus the 75-degree field-of-view on the main 8-megapixel sensor there. Google, of course, does a ton of work on the software side with the camera on its Pixel smartphones, and that is the case here again. Google also included a few new features, like Night Sight, and Top Shot, to get better images at night and group shots, respectively.

Background: Google moved over to the "Pixel" name in 2016, after using the "Nexus" name since 2010. The reason behind the change was the fact that Google was actually making these smartphones now, instead of working with a partner like HTC, Samsung, Motorola or LG. Hence the #MadeByGoogle hashtag. Pixel also denotes a higher-end build quality, as Google has been establishing that brand since around 2013 when it first released the Chromebook Pixel. And that has been the case with the Pixel smartphones since they launched in 2016. Now they may not be the most cutting-edge smartphone, like a Galaxy Note 9 or a Huawei Mate 20 Pro, but it does represent the best Android software in the business, and the best hardware as well. Giving users the pure Google experience, which is something everyone would like to see.

With the Pixels, Google has shifted focus from offering inexpensive smartphones with great build quality, to offering something that has the best camera on Android. The Pixel had a pretty good camera, but Google took it to another level with the Pixel 2 last year. The level was so high that, smartphones released nearly a year later still can't beat the Pixel 2. Which that in itself is pretty impressive. The Pixel 3 is improving on that, though some people may not like all of the software processing that Google does with its images, but the good thing here is that you can still save images as RAW without any post-processing, and of course there is a ton of other great cameras on the market right now. Like the Huawei Mate 20 Pro that was just announced. The design of the Pixel lineup is not something that everyone loves, especially with the notch on the Pixel 3 XL – in fact, many are thinking of purchasing the smaller Pixel 3 because of that – but it is a unique design compared to the hundreds of thousands of smartphones running Android right now.

Impact: Verizon is the only carrier selling the Pixel 3, and yes it will promote it as an "exclusive", but that is not exactly true here. The Verizon Pixel 3, as well as the version sold by Google, will work on all four carriers. The only exclusive here for Verizon is that it is the only carrier actually selling the phone. There is nothing stopping users from buying the Pixel 3 from Google and taking it over to Sprint, T-Mobile or AT&T. This is because the Pixel 3 does work on all four carriers, as the previous two generations have as well. The only real downside for consumers here is the fact that you won't be able to pay for the phone in monthly payments unless you buy it from Verizon or on Project Fi.

Speaking of Verizon, it is offering a pretty good promotion on the Google Pixel 3 and Pixel 3 XL, which is pretty impressive to say the least. You can buy a Pixel 3 and get one for free. Now there is some fine print here on this promotion. Essentially, if you buy one device, you will get a $799 credit towards the second, and of course the more expensive one is the one you would pay full price for. So if you buy a Pixel 3 and Pixel 3 XL, the $799 credit would go towards the Pixel 3. The credit is sent out over 24 monthly bill credits, so you will need to stick with Verizon for the full two years to get your full credit here. You also need to add a line of service to your account to take advantage of this deal. It's unclear how long this deal is going to be available, but it likely won't be long.

If you already pre-ordered your Pixel 3, it should be arriving today, or in the next few days. And you are going to want to check out our top 10 best accessories for the Pixel 3 as well, so you can take full advantage of that smartphone. Otherwise, you can purchase the Google Pixel 3 using the links down below. It may give you a later ship date, but Google has been underpromising and over-delivering on those shipping dates, so it'll likely arrive before that window that Google gives you when you place your order.