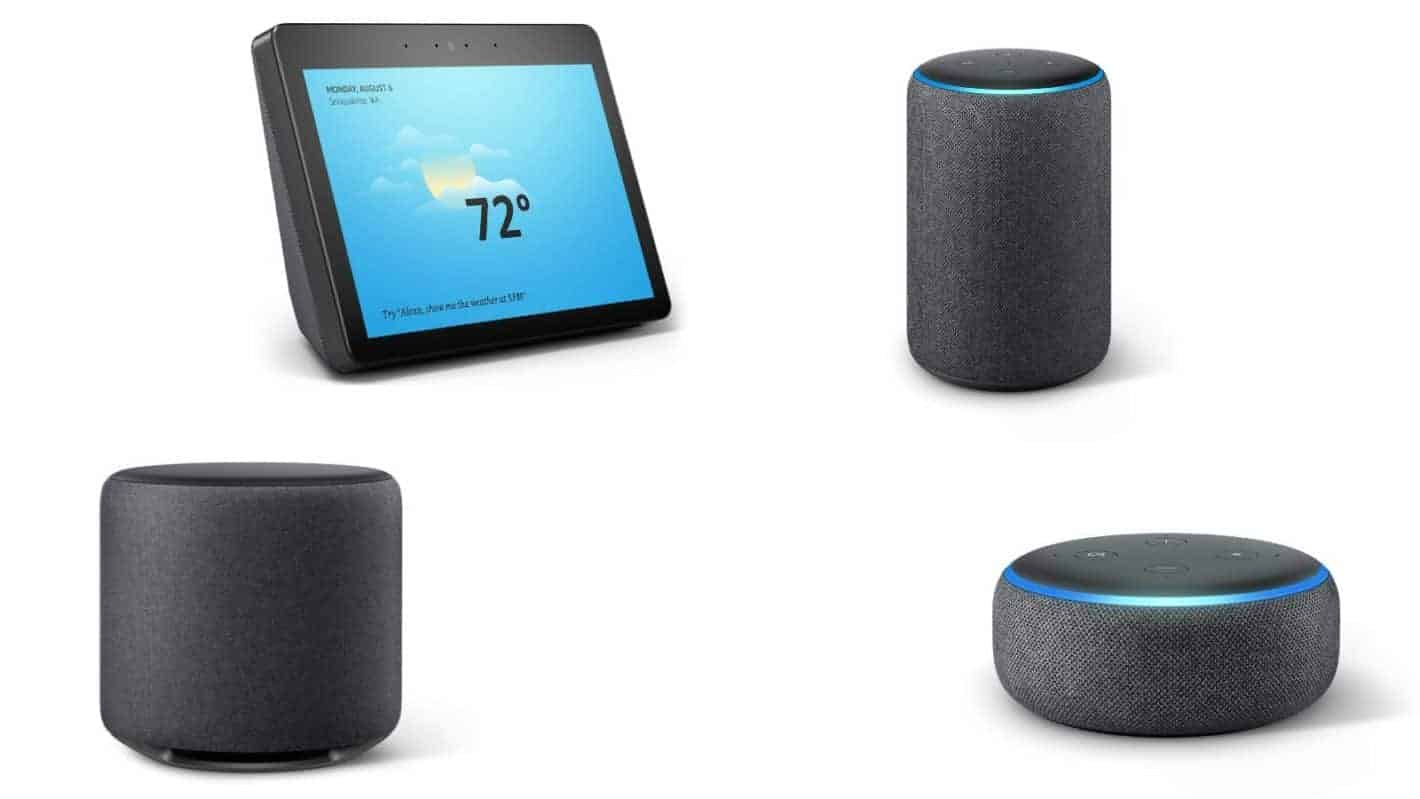 The Echo Dot is a pretty solid upgrade over the second generation Echo Dot, and it will definitely be a top seller again this year. The new Echo Dot has fabric wrapped around it, to give it a more conventional look, and it also has improved audio. That’s a good thing as the previous Echo Dot’s audio quality was just not that good at all. Amazon promises that it is around 40-percent better than the previous generation. It is available in three colors: charcoal, heather gray and sandstone. The charcoal and heather gray colors come with a black top and bottom while the sandstone gets a white top and bottom. The Echo Dot is priced at $49.99.

Now the Echo Plus is the successor to the smart speaker that Amazon debuted last year. It is now shorter – almost the same size as the regular Echo. The audio was already great on the Echo Plus, but now it is improved even more, thanks to Amazon working with Dolby. The Echo Plus also has a built-in with Zigbee, so that you are able to connect all of your smart home products to the Echo Plus instead of needing a separate hub to connect them to Alexa and to your WiFi. The Echo Plus is priced at $149.

Buy the Amazon Echo Plus

The common theme this year for Amazon is improving its audio, and moving into a premium audio space with the new Echo devices. So it’s no surprise that the Echo Sub was also announced. It’s a wireless subwoofer that can connect to your other Echo devices, and it can output up to around 100W of power. That is going to allow for some really deep bass coming out of this speaker, and that is definitely great to hear here (no pun intended). You can pair this with one Echo or Echo Plus to get a great audio experience, or opt to pair it with two for an even better experience, and it’s all done wirelessly. The Echo Sub is actually somewhat cheap, coming in at $129.

Finally, we have the Echo Show. Which is a much improved smart display from Amazon over the original Echo Show. This one sports a larger 10.1-inch display, but in a smaller form factor – that is because the bottom half is not a speaker like with the original Echo Show. The display is also now HD instead of SD. You’ve got premium speakers, again thanks to Amazon working with Dolby for tuning them, which are mounted on the back. This is going to allow the Echo Show to provide some great sounding audio and really fill the room. Since the Echo Show has a display, you can take advantage of it by making video calls over Alexa. The Echo Show is available for $230.

Background: Amazon released a number of devices at its event last month, there are still a few other Echo and Fire TV devices that are going to be available later this month. Amazon is making sure that is has an Alexa device that will fit everyone’s needs here. And while the Echo Dot and Echo Plus will likely be the best sellers for Amazon, the others are definitely nice compliments here. Amazon has been going all-in with Alexa in the past year or two, after it saw how well the Echo Dot has sold and how popular Alexa is truly becoming. Part of this is because Alexa does have a sizable lead over Google Assistant in terms of compatibility with smart home devices like those from Nest, Philips Hue and others. But that is starting to dwindle, thanks to Google working hard to get more partners on-board. Amazon is also a big believer of bringing Alexa into every room of your home. For instance, you can use the Echo Show in the kitchen, which is great for following recipes. You could also use the Echo Sub in the living room with your home entertainment system, and get some great audio out there for parties, get-togethers and so forth.

Impact: This wouldn’t be an Amazon product launch without offering discounts on the many Echo devices that are now on sale. You can pick up two Echo Dots for $10 off or about $90 (that’s $45 each). For the Echo Plus, it’s actually not discounted, but you can get a free Philips Hue bulb with your purchase. That is actually a good way for Amazon to really promote the fact that it has that built-in hub, so you don’t need the Philips Hue Bridge to use that bulb. For the Echo Show, it’s a similar deal to the Echo Dots, buy two Echo Shows and you’ll get $100 off. That brings the price down to $180 each or $360 for both. Finally, for the Echo Sub, you can get two Echo Plus smart speakers included for $329.97, that is good for $100 off of its regular price. For the Echo Dot and Echo Show deal, there is no promo code needed, it will update when you go to checkout. These deals will be great to take advantage of and get started early on your holiday shopping. You can pick up these new Echo devices from the links below. Keep in mind that these may sell out pretty soon, but Amazon is making more so you can still purchase them and they will ship when they become available. They will also still arrive in time for the holidays.