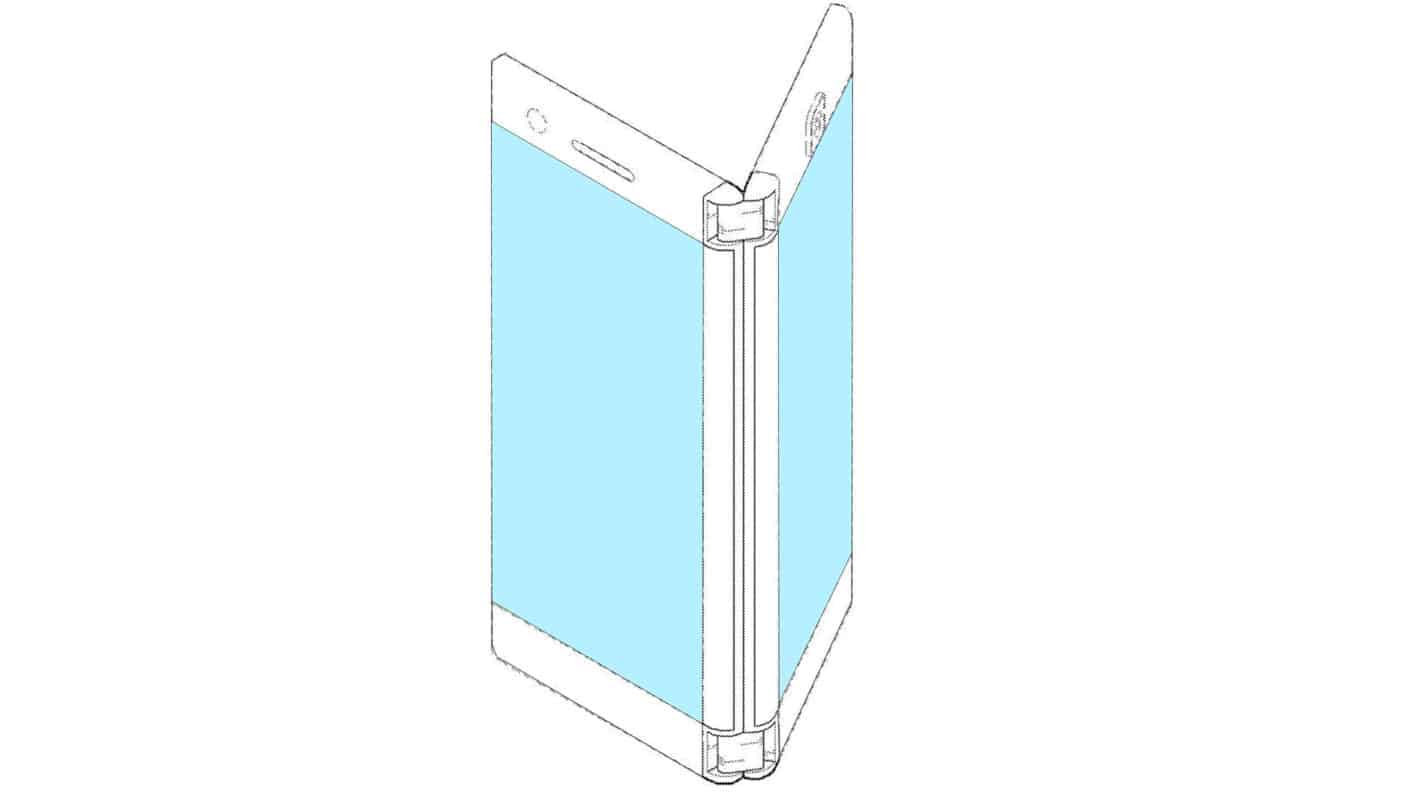 In short: After ZTE, Samsung, and several other manufacturers, LG Electronics started pondering the idea of dual-screen smartphones as well, having recently obtained a patent for a two-part hinge meant to be at the heart of such devices, according to IP documentation reviewed by AndroidHeadlines. The sketch shown above is an illustration of the said solution but while it somewhat resembles the ZTE Axon M, LG's hinge is capable of rotating more than 180 degrees, up to the point that the smartphone using it resembles a miniature laptop in landscape mode.

The South Korean technology juggernaut made no particular claims in regards to the design of the actual handset that would be equipped with the contraption as its patent application — granted earlier this month in several jurisdictions — is solely centered on the hinge mechanism itself. Unlike the Axon M and previous commercializations of the same concept, LG's hinge comes in two smaller parts instead of one larger module and could be cheaper to manufacture as it would require fewer materials.

Background: To date, Kyocera's 2011 Echo and ZTE's 2017 Axon M remain the only two mainstream smartphones that paired two screens with a hinge, and both did so with little to none commercial success. Last year's device was an AT&T exclusive in the United States and was met with a lukewarm response from consumers and critics alike, with many people who had a chance to try it out describing the experience as gimmicky. Regardless, ZTE said it was pleased with how the handset turned out, vowing to continue iterating on the concept until it's capable of delivering a truly foldable mobile device.

OPPO, the second-largest smartphone maker in China, has also been toying with a similar idea, AndroidHeadlines discovered earlier this month. Whereas the aforementioned manufacturers envisioned hinges as a way of adding a second screen to contemporary handsets, OPPO has been experimenting with the concept of turning them into full-fledged tablets by relying on such a contraption. though its concept may not be commercialized anytime soon by virtue of the fact that it requires a highly flexible OLED panel, something that the company may not have access to in large quantities in the near term.

Huawei CEO Richard Yu recently confirmed the technology giant came up with a working prototype of a ZTE Axon M-like device no later than 2017 but decided against turning it into a consumer-grade product because it wasn't pleased with the overall experience offered by the creation. Huawei's focus groups and other forms of testing suggested the addition of a second screen connected via a hinge was only valuable to users if the break between the two panels is minimal when the device is in a folded-out state, yet the firm didn't have the technical capabilities to produce such a gadget on a significant scale last year. While it's presently unclear whether Huawei found a way to address that problem or decided to pursue other foldable smartphone concepts, its own officials said the Shenzhen-based original equipment manufacturer will be releasing its first bendable handset no later than 2019. In fact, its first Android device with support for the fifth generation of mobile networks will also be foldable, rotating Chairman Ken Hu said at the World Economic Forum late last month.

Samsung is still expected to win the global foldable smartphone race as far as handsets with truly bendable screens are confirmed; the Galaxy F or however its seminal gadget ends up being called is widely believed to be scheduled for an early 2019 release and may even be announced next month at the company's annual Developer Conference taking place in San Francisco on November 7 and November 8. While Samsung is rumored to have the most advanced foldable phone technology in the world, it has also been toying with the dual-screen concept akin to the one seen here, AndroidHeadlines reported earlier this week. Samsung also moved to patent its solution and described it in a highly detailed manner that's uncharacteristic of device patents, suggesting it may have even moved past the sketching phase and into physical prototyping.

As for LG itself, the OEM confirmed it's looking into foldable smartphones on several occasions, having most recently done so during the V40 ThinQ launch event earlier this month. A spokesperson for the Seoul-based conglomerate told AndroidHeadlines it isn't concerned about being the first to commercialize such a device and instead wants to deliver the most interesting foldable handset in the world, regardless of how long it takes it to do so. Whenever that happens, such a gadget will likely utilize a flexible P-OLED screen given how LG Display already has the technical capability to produce such mobile panels at a scale.

Impact: In addition to 5G, 3D imaging, camera setups with three or more lenses, and in-display fingerprint readers, foldable displays appear to be one of the next major trends in the mobile industry. While many questions about their convenience and applications remain, many manufacturers have already expressed a desire to commercialize them, describing such devices as one of those things consumers don't know they want until they actually try them out. LG is part of that optimistic crowd but doesn't feel pressured to be the first to release a foldable handset and continues to toy with various concepts of the thereof, including both single- and dual-screen gadgets.

What exactly those R&D efforts end up amounting to remains to be seen but whatever happens, LG is extremely likely to start experimenting with product form factors and functionalities in a more aggressive manner moving forward given how its smartphone business is currently struggling. Despite recording unprecedented growth in almost all areas, LG continues to lose tens of millions of dollars on its mobile division every quarter and if conventional handsets aren't cutting it for the company any longer, maybe foldable devices with 5G connectivity and other cutting-edge technologies fare better. LG isn't likely to provide an update on its bendable phone ambitions prior to 2019 when the company is scheduled to attend two major first-quarter trade shows – CES in Las Vegas and Barcelona-based MWC.