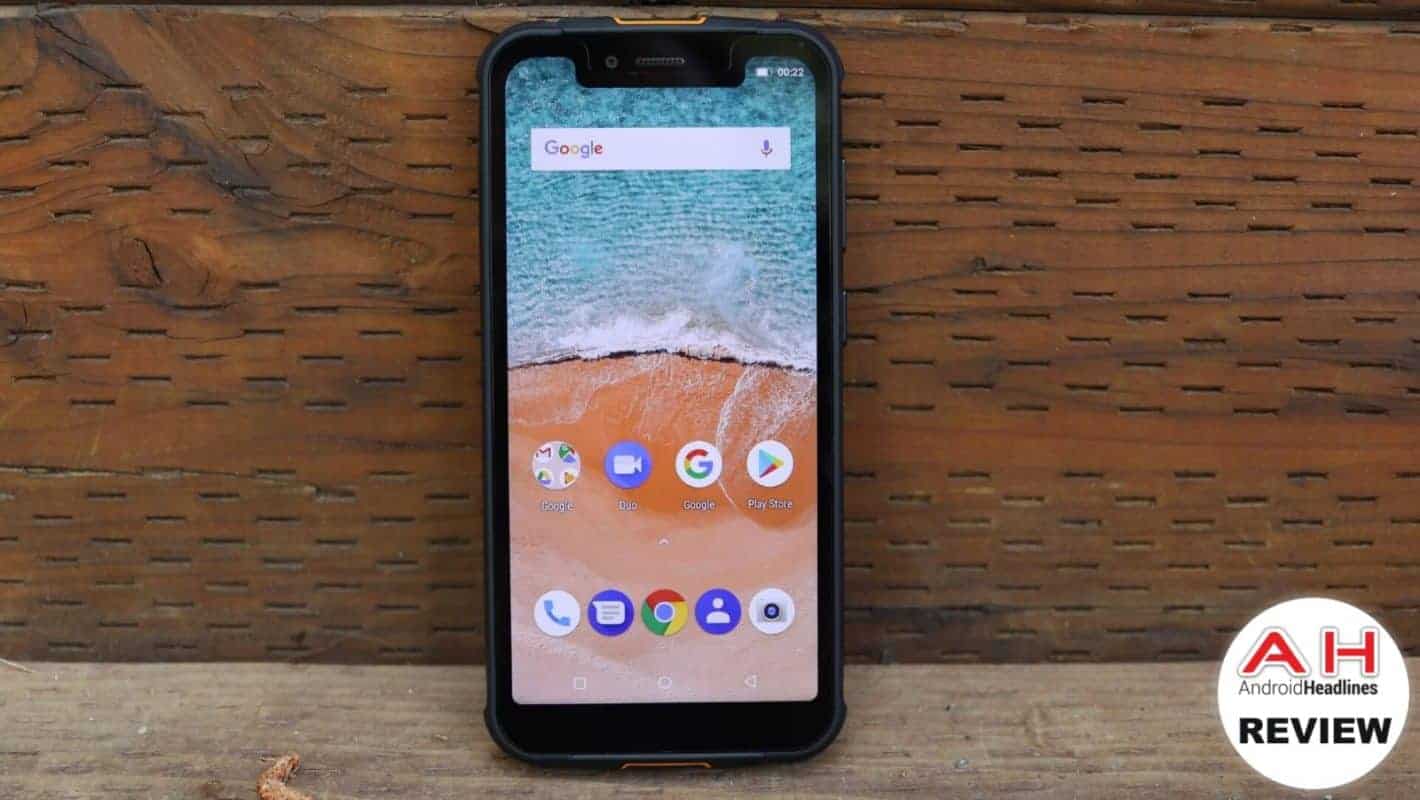 The Armor 5 builds on Ulefone's experience via distinct aesthetics and a rugged build, without bloatware to bog things down.

Ulefone's Armor 5 is a smartphone that builds on years of rugged designs with big batteries squeezed into a device with a different look and new materials. Of course, not everything about this particular Android 8.1 Oreo device is perfect, whether that's slight issues with the camera software or with battery life. However, it does shine out amongst a sea of competitors, each of which is vying to build the perfect example of nearly unbreakable hardware at the budget-minded end of the mid-range. It's comfortable to hold and use, has a reasonable display panel topped with premium-style protective features, and won't slow down when there's work to be done. 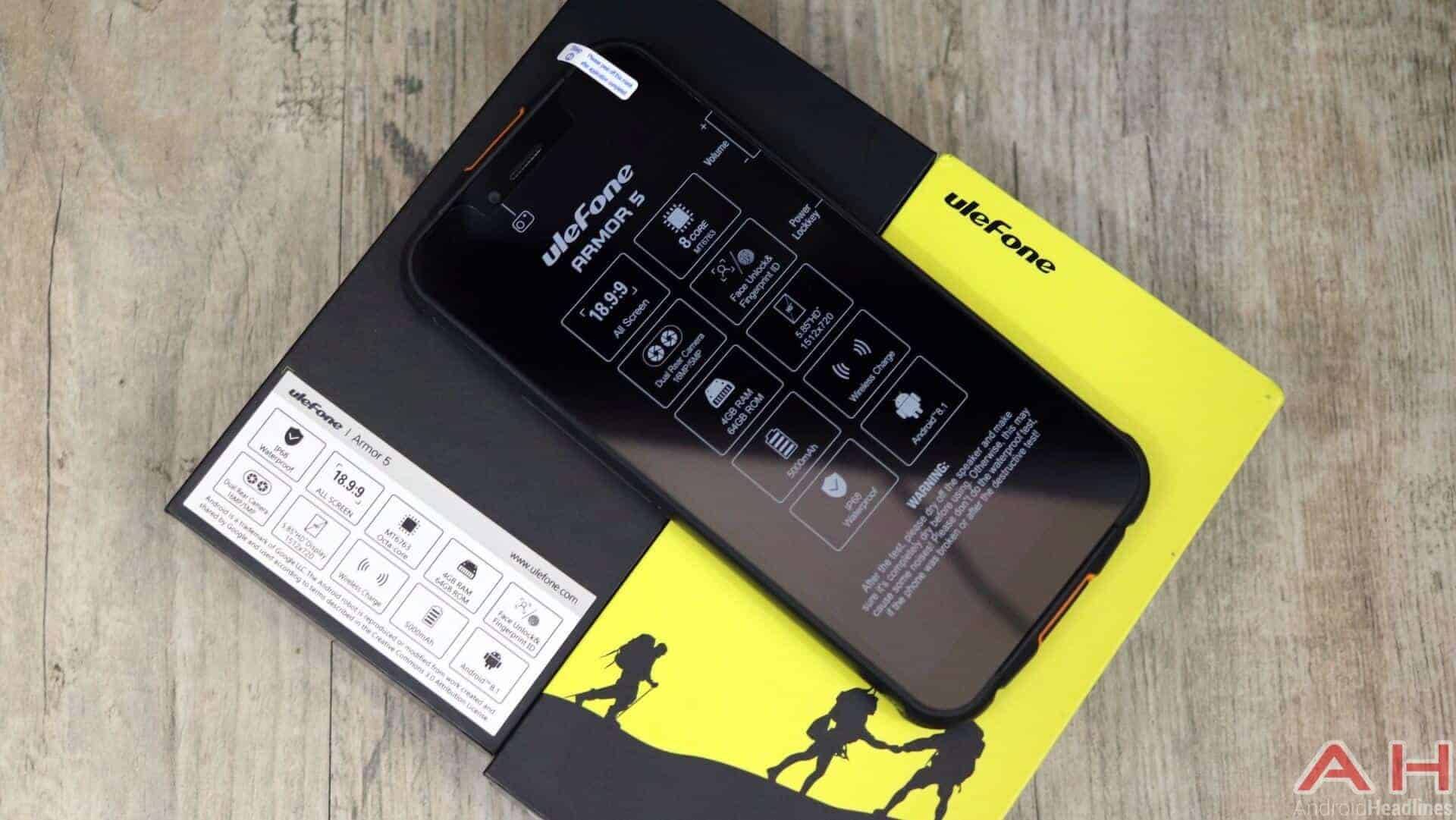 The Ulefone Armor 5 is a durable handset with a 5.85-inch display set at a resolution of 1512 x 720, a ratio of 18.9:9 and a screen-to-body ratio of over 91-percent. That’s squeezed into a 158.3 x 76 x 12.6mm 228-gram frame comprised of Corning Gorilla Glass 4 at the front, a composite acrylic material at the back, and silicone edges for a ruggedization rating at IP68. The materials used and design enables a unique style while allowing device survival at approximately 5-feet underwater for up to an hour or under concrete at a 3.2-feet for up to 24-hours, according to the company. A 13-megapixel interpolated front-facing camera a with an aperture set at f/2.4 allows for face unlocking across 512 position readings while a fingerprint scanner is placed at the back under the dual camera array and above a left-oriented rear-facing speaker. Those sensors are rated at an interpolated 16-megapixels and 5-megapixels with an LED flash and f/2.2 aperture.

A 5V/2A-rated USB-C 2.0 charging port resides along the bottom edge for powering up the reverse and fast charge-enabled 5,000 mAh battery. 10W Qi rapid charging is also part of this package. Meanwhile, while the left and top edges house a dual-LTE nano SIM hybrid micro SD card drawer and headphone jack, respectively. That’s all managed by near-stock Android 8.1 Oreo, driven by an octa-core MediaTek MT6763 SoC – clocked at up to 2.0GHz and backed up by 4GB RAM and 64GB Storage expandable up to 256GB. Bluetooth 4.0, NFC, GPS, GLONASS, and dual-band Wi-Fi 802.11a/b/g/n provide connectivity options. With regard to availability, the Armor 5 is available in either a blue-on-blue or orange-on-black configuration for between $219 and $280 on average. 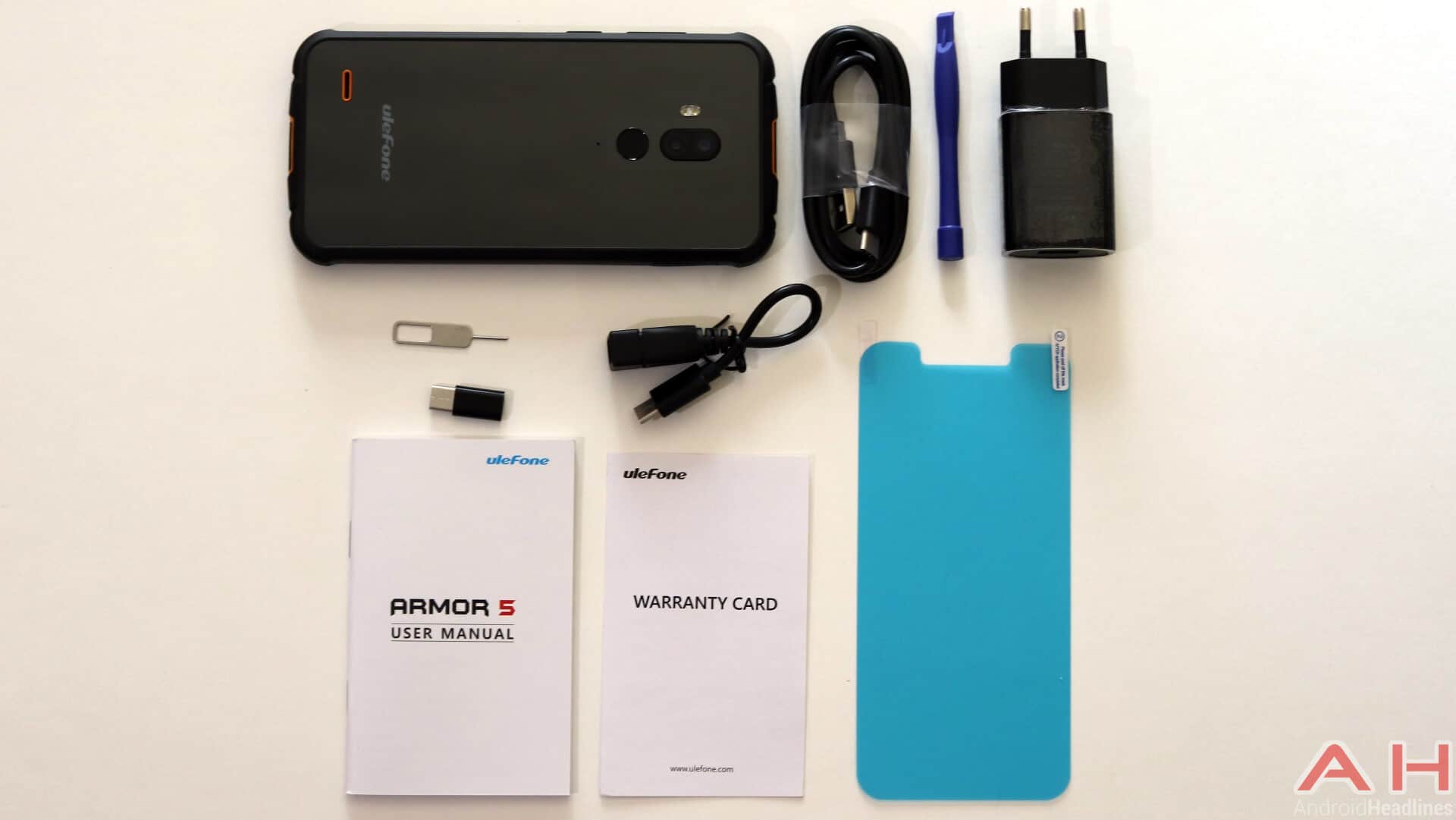 Included in the box with the Ulefone Armor 5 is the handset itself, with a pre-installed film screen protector. A second of those is packaged in as well. Users will also find a USB cable and a wall adapter, alongside a Type-C to Micro USB adapter, OTG cable for reverse charging and data transfers, and a SIM tool for accessing the SIM port. A plastic pry stick is included too, which enables users to access the ports since those are all covered by thick silicone inserts and can be a real pain to use with just fingernails. Finally, a warranty card and user manual are, of course, included to help those who may be new to rugged handsets or Android devices, in general, get started. 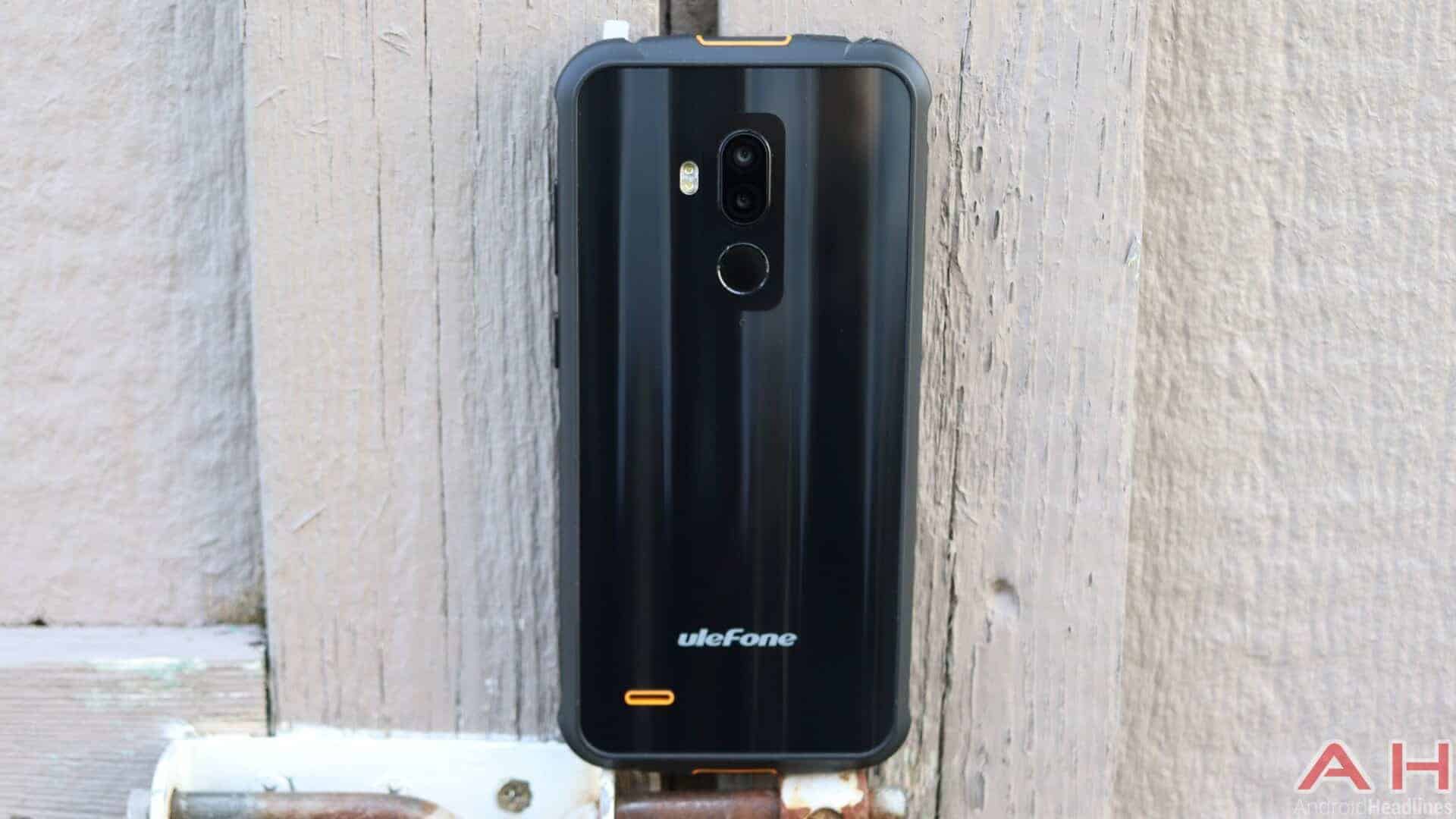 On the design front, Ulefone’s latest rugged handset is not at all the thinnest device on the market. That’s also not a problem since it isn’t intended to be. Instead, it’s a device that’s meant to be protected while still accomplishing smartphone tasks under harsh conditions or a dirty work environment. The silicone jackets slotted into each port and surrounding the edges go a long way toward providing ample protection against dust and water incursion, as well as protecting against drops. However, it also has a uniquely satisfying aesthetic appeal due to its use of highly-reflective and light-bending acrylics at the back. Our test unit was the orange-on-black variation and featured a thin orange line of metal carving its way around the edge. That’s accented further by orange surround on speaker and the top and bottom port covers. The Gorilla Glass screen adds further protection against drops as well.

Meanwhile, the buttons are not only clicky but have a differentiation in texture. The ridges on the power button mean that it’s relatively easy to find by feel even through gloves. Those buttons are solidly placed in this design while the ports are all very snug and don’t show any jostling or looseness. The overall in-hand feel leaves an impression that this handset will survive quite a substantial amount of abuse without sacrificing on design beyond what a typical Otterbox or similarly protection-oriented case might add to the bulk. There's also no slipperiness to speak of. Given the ruggedization in use here, it’s impressive that the Armor 5 maintains a comparatively great look through the company’s design language. 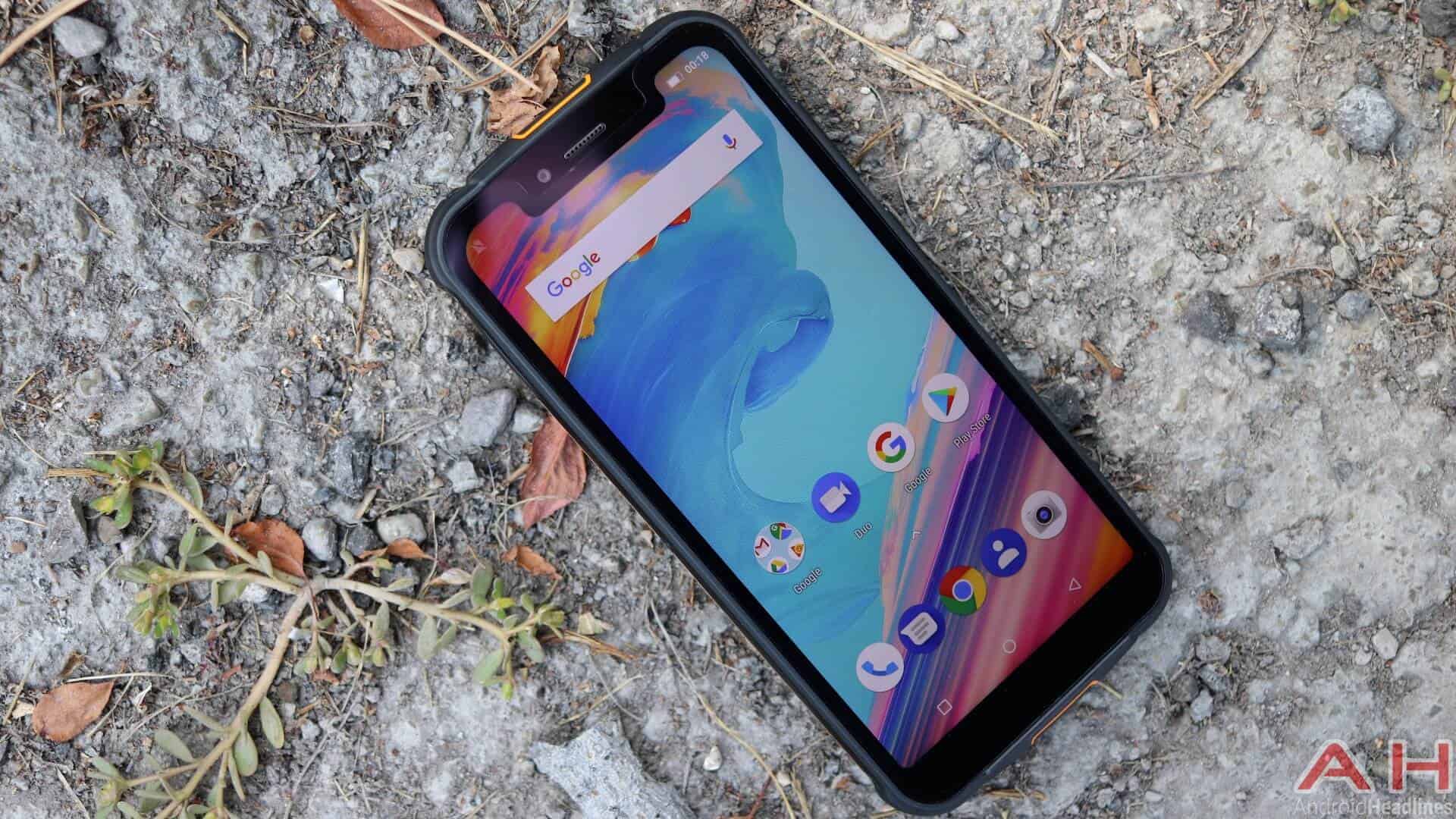 In spite of the decision to only have a display that's set at 1512 x 720 pixels in a form factor that measures nearly 6-inches, Ulefone’s handset performs rather well on that front. Not only is everything clearly displayed, with accurate colors. The panel is responsive and the use of Gorilla Glass 4 means that users shouldn’t experience scratching just from carrying the device in their pocket – or in the pocket of a bag filled with tools or hiking equipment. The nearly 19:9 display ratio provides plenty of real estate for watching videos, reading, or browsing as well. So although this is hardly the most advanced screen on the market, it will be hard to find one that rests on top of the other features found in this handset within the price range. And it doesn't take away from the experience to any immediately noticeable degree. 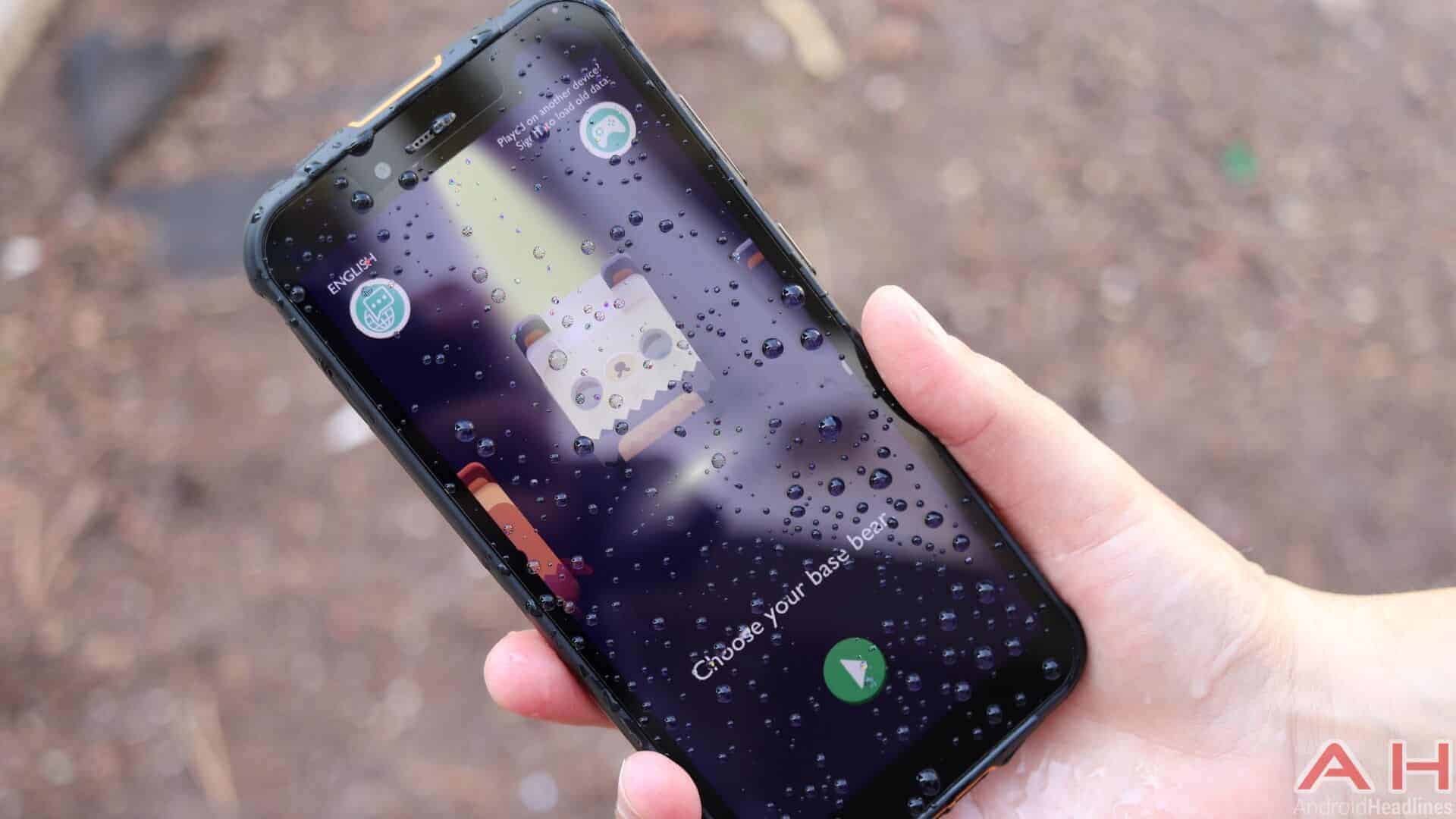 The battery included in the Ulefone Armor 5 is not all that great, in spite of its 5,000 mAh capacity. The company claims it should last watching videos for around 10-hours but our benchmark showed a screen-on time closer to five hours and 30 minutes. Our real-world testing seemed to corroborate that but things improved with the screen dimmed and power-saving features turned on. That’s somewhat unfortunate since it means users will need to perform their own optimizations to obtain an ‘as-advertised’ battery life. Meanwhile, charging takes around 3 hours and 15 minutes. That’s 15 minutes longer than advertised from a completely drained battery.

On the other hand, performance was shown to be reasonably good. Although single-core operations were below 850 according to our benchmarks testing, multi-core tests returned a score closer to 4,000. "Compute" testing showed a score just below Samsung’s Galaxy S7. That means that in most instances, this handset will be able to keep up with whatever tasks users throw its way. Of course, that doesn’t mean it’s going to play the highest-intensity games at their very best. It won’t and that’s not at all what it’s designed to accomplish. However, we didn’t experience any lag in any of the top Android games currently on the market and it should serve the majority of users well into the foreseeable future on that front. 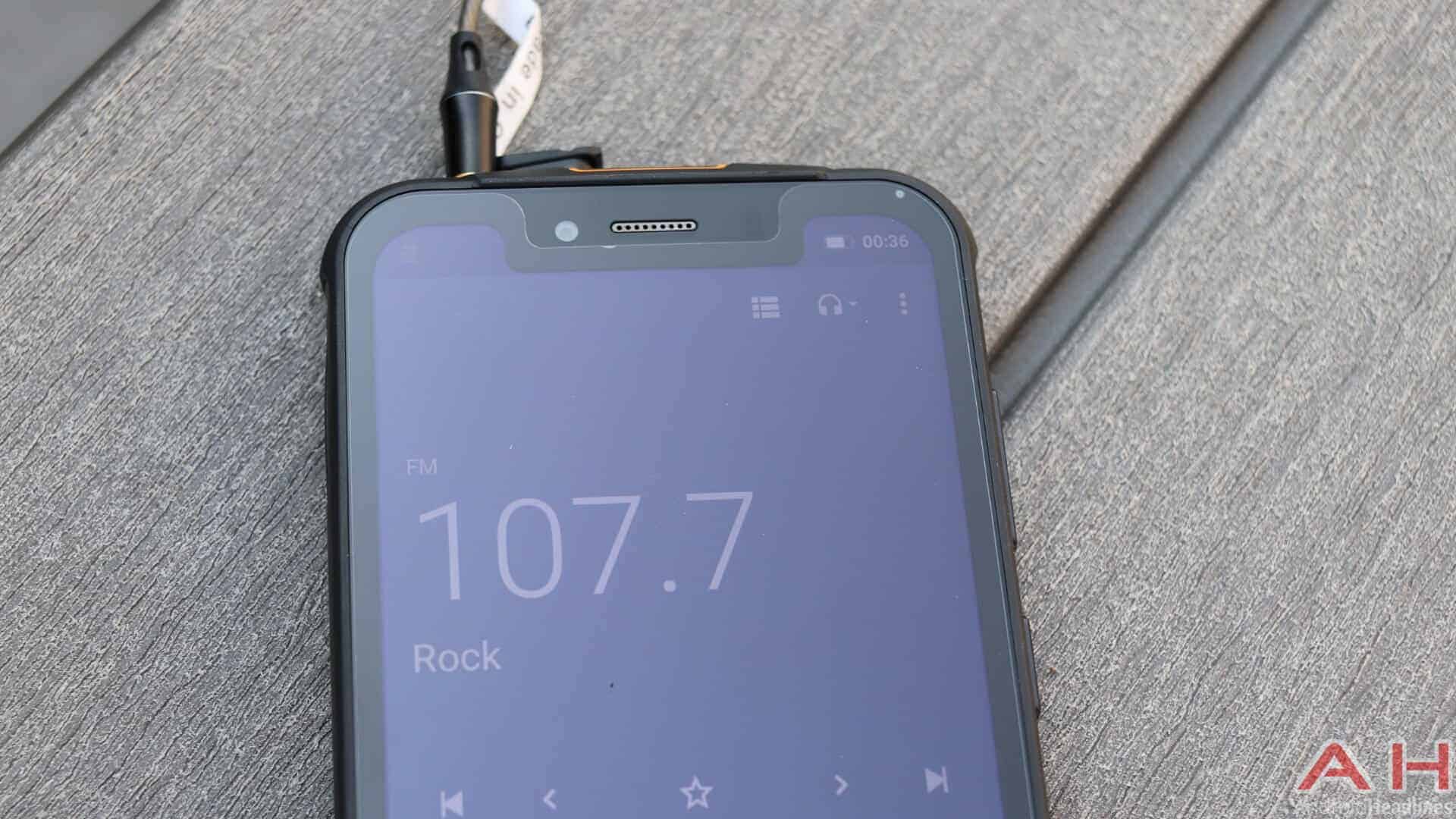 For audio, Ulefone has included an AW8736 high-quality audio chipset and opted to keep its 3.5mm headphone jack. No headphones are included in the package but most users have their own preferences in any case, so that’s not a big deal. Despite having only a single rear-facing speaker, that chip drives a remarkably good listening experience, comparatively speaking. It isn’t necessarily as good as what a user might get with a top-tier handset with a design centered around audio output but this isn’t a top-end handset either. So the audio does stand out with playback that’s clear and well-balanced compared to other rugged devices or handsets in the price range, in general. Those don’t perform perfectly at full volume, likely owing to an issue in software optimization. However, the quality carries over to audio pushed through headphones or Bluetooth as well. Conversely, we weren’t able to test mobile connectivity at all due to an incompatibility with our test carrier in the U.S. Again, that isn’t a big deal since this phone isn’t really meant for that market. The earpiece and mic perform well enough to not stand out in a negative light and the following bands are supported. 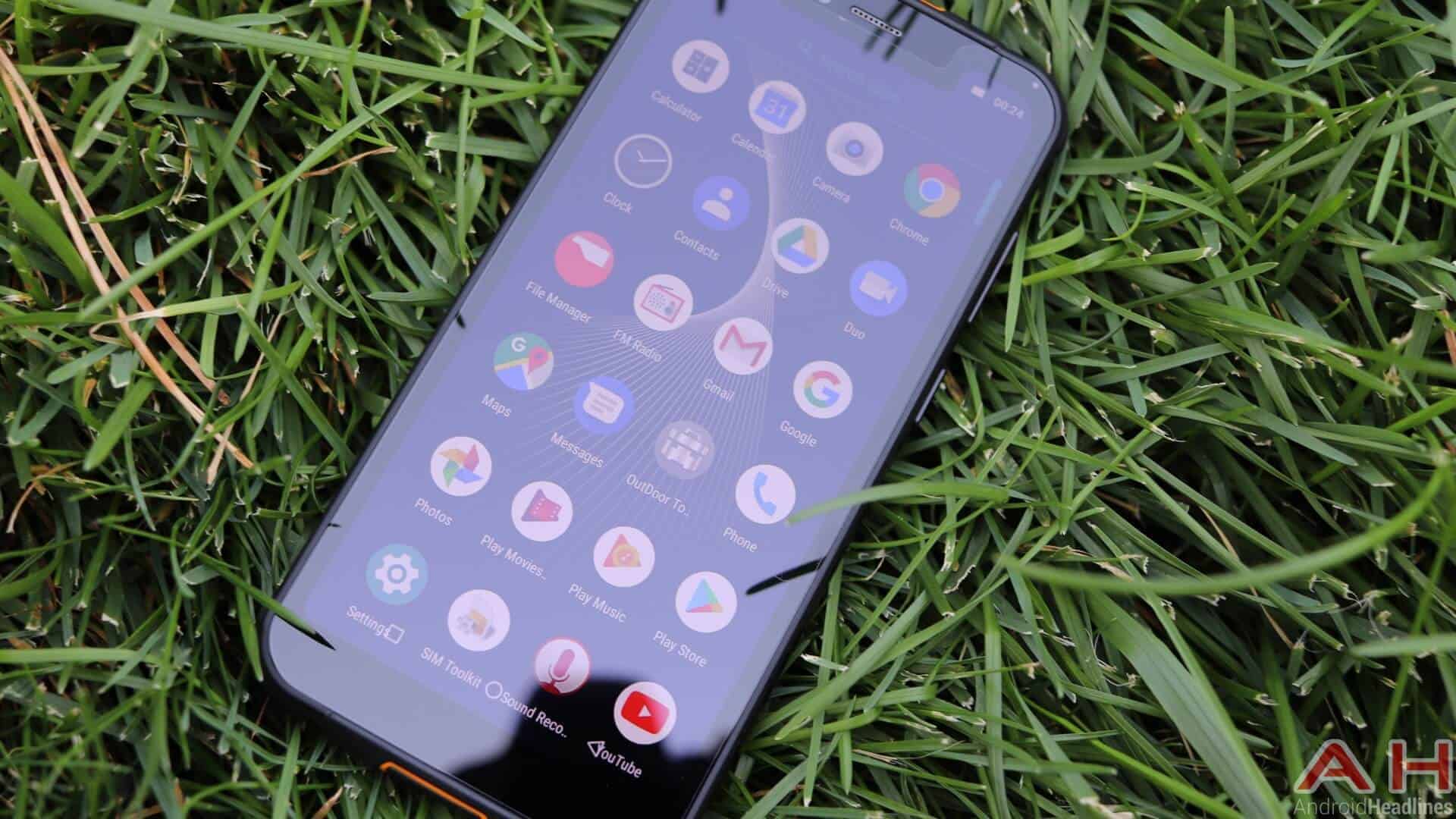 Software in the Ulefone Armor 5 is entirely stock with the exception of a single folder – and none of those inclusions are uncommon either, except that they don't ordinarily all come pre-installed. That means all of the great features and software associated with Android 8.1 are present without a lot of bloatware, allowing for a genuinely pleasant experience. In the meantime, that folder is titled "OutDoor Tools" and is filled with tools that, as the name implies, are firmly in the utility category. A compass and flashlight are part of that toolkit. There are also five camera-based different software for measuring how level things in the surrounding environment are within given contexts. That includes a Bubble Level, Picture Hanging level, Height Meter, Magnifier (which is effectively the camera's zoom software without the photo-capture functionality), and a Plumb Bob. Finally, an Alarm app is included which can play an alarm noise, flash the flashlight or the screen, or do all three in case of an emergency. 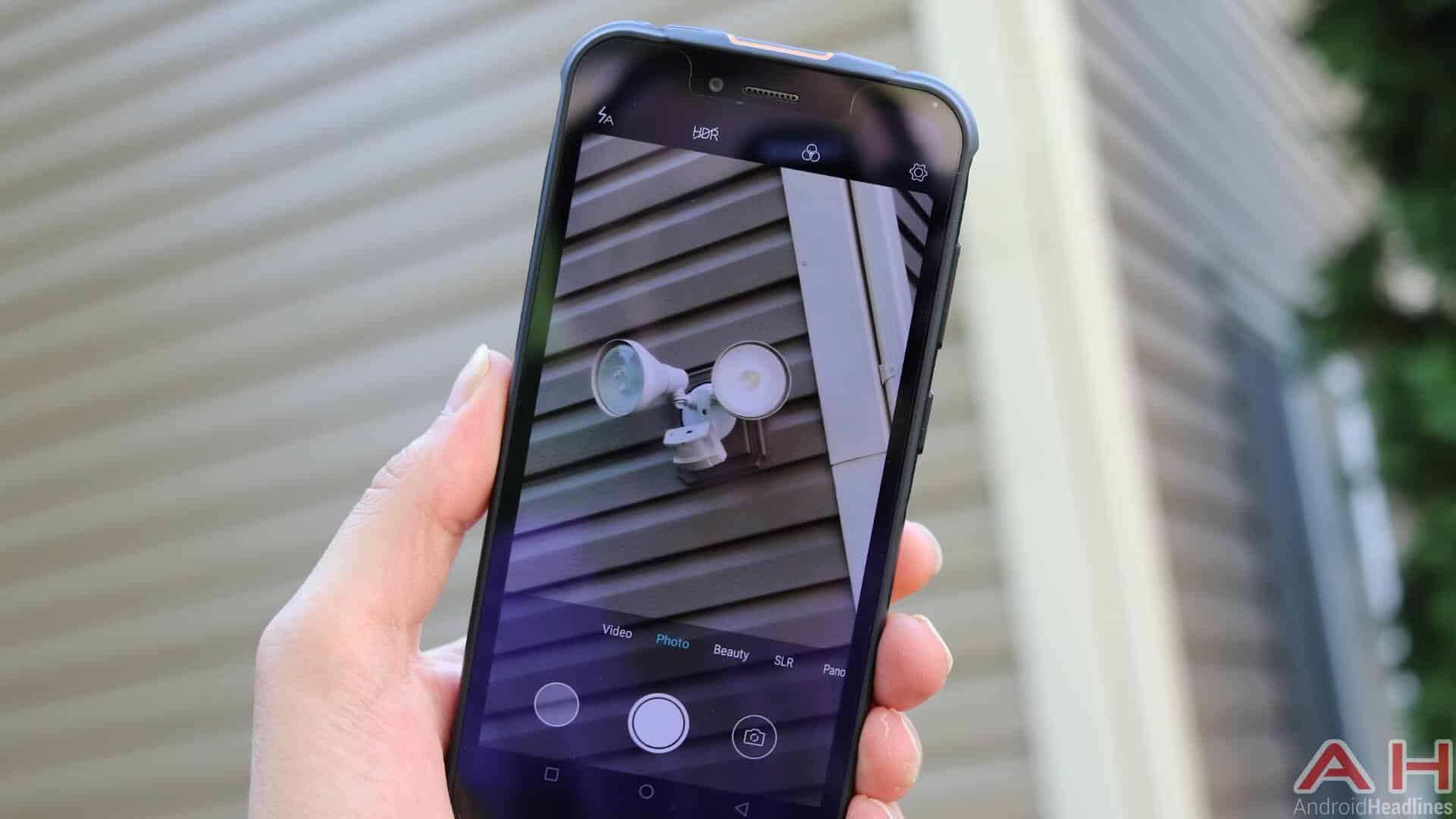 The cameras in the Ulefone Armor 5 utilize respectable hardware that appears to be let down in some specific circumstances by the optimizations. That’s not to say it is a bad setup but it isn’t perfect by any stretch of the imagination. In high-motion shots, moving objects tend to get blurred out. That likely comes down to the shutter speed and focus speed, although both appear to work well in other circumstances. Similarly, photos in which focus is placed on objects other than the sky can tend to get washed out. That doesn’t seem to happen when the sky is the focus of the image but is worth being aware of. Setting those caveats aside, the camera is good enough for nearly any use and certainly works better than many others within a comparable price bracket. The selfie camera, to the contrary, does suffer the same low-light graininess seen with other smartphones but that isn't at all unique to the Armor 5.

No bloatware aside from tools meant for outdoors work or exploration

Design is unique and not overly bulky or utilitarian

Charging can take just over 3 hours

Cumulatively, all of those caveats and highlights point to a smartphone that will be a great fit for those users who need more durability but don't want to spend too much, lose features, or take on a lot of extraneous software. Most, if not all, problem-areas expressed here are neither dealbreakers or necessarily permanent. In fact, most seem to be issues that could be solved easily enough with a software update or two and they won't automatically create problems for end-users in most cases. Put simply, the Ulefone Armor 5 is more-than-worth the money if users are looking for a rugged device that can be depended on for day-to-day use.