Torrents are usually mentioned in negative ways, as in ways to download illegal content, but there’s a ton of legit content available via torrent websites, and in order to get to it, you’ll need a proper torrent application. There are a ton of torrent apps available in the Play Store, though not all of them are good, of course. Because of that reason, we’ve hand-picked 10 torrent apps that we think are worth your time. Do keep in mind that these apps are not listed in a specific order. Flud is one of the most reliable and most popular Torrent apps available via the Play Store. This application comes with a flat design, and all the torrent features you may want, not to mention that it has a dark theme. This app uses BitTorrent protocol, and it has no download / upload speed limits. RSS feed support with automatic downloading is included in this application, while the app also has magnet link support. µTP and PeX are supported by Flud, and these are only some of the features this app offers. 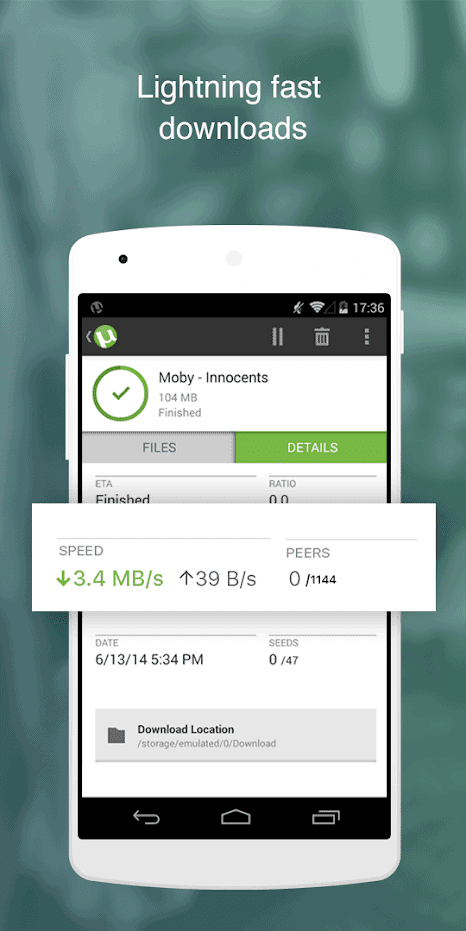 µTorrent has far more downloads than Flud, and it’s generally a better-known app, as this torrent client has been available for desktops for the longest time, and it’s mostly reliable as well. Flat design is a part of this app as well, and it also uses BitTorrent protocol to download content. This app combines white and green colors to create a rather unique UI, and there are all sorts of additional features included in this app, along with ads… a paid version is available, though, same as with Flud. BitTorrent is yet another immensely popular torrent app for Android, and much like the first two we’ve talked about, this app also comes with flat UI. This torrent app also has no download / upload limits, while it comes with Wifi-only moe to save on mobile data. BitTorrent supports magnet links as well, and has all the features you’d want from a torrent app. This app also has a pro version which offers even more features, in case you need them. Transmission BTC is a torrent-downloading app that most of you are probably not that familiar with, but this app is quite popular on Linux, and it’s quite capable as well. Transmission BTC app’s UI is quite simple, which is something most of you will probably appreciate. This app supports magnet links, DHT, µTP, UPnP, and NAT-PMP port forwarding, while it supports HTTP(S)/SOCKS proxy as well. Vuze’s UI is somewhat similar to that of Transmission BTC’s, and this is also quite a capable torrent app that has been around for a while now. This app is quite lightweight, while it supports magnet links. Wifi only setting is available in the app, while you’re not limited when it comes to download / upload speeds here either. Vuze comes with a PRO version as well, which will not only remove ads, but also add some additional features to the app. zetaTorrent has over 500,000 downloads in the Play Store thus far, and this app is quite capable, despite the fact it doesn’t exactly sport full Material Design UI. Unlike other torrent apps out there, this app comes with a built-in browser (which includes ad blocker), and a fully featured file manager which supports Samba (CIFS) and has an FTP client built in. All the regular torrent features are included here, while you can choose between light and dark themes. WeTorrent is based on BitTorrent’s protocol, like many other torrents on this list, and this torrent actually offers a really clean UI. There are no download or upload limits here, while this app supports magnet links, and multiple simultaneous downloads, which is something all of the app have in common, pretty much. This application is free, though it comes with ads, which was is to be expected. aTorrent is an extremely popular torrent app for Android, it currently has over 100 million downloads in the Play Store, and it supports magnet links, a no download limits of any kind. You can set this app to download torrents only when you’re connected to a Wi-Fi network, and the app also allows you to choose the download path for files that you’re planning to download. This app supports various protocols, and is free to use. LibreTorrent is yet another app that comes with Material Design UI, and this app combines purple and white colors in order to create an appealing UI. This app supports DHT, PeX, LSD, UPnP, NAT-PMP, µTP, and so on. LibreTorrent’s UI is optimized for tablets as well, while an RSS manager is built into this application. Some power management and battery control options are also included in this application. CatTorrent is not exactly as popular as some other apps on this list, but this app is quite capable, and it comes with a really nice, clean user interface. Magnet links are supported by the app, while the app also comes with DHT support. You can change download folders using this application, while there are some battery-related options included here as well, you can set this app to download torrents only when the phone is charging, for example.