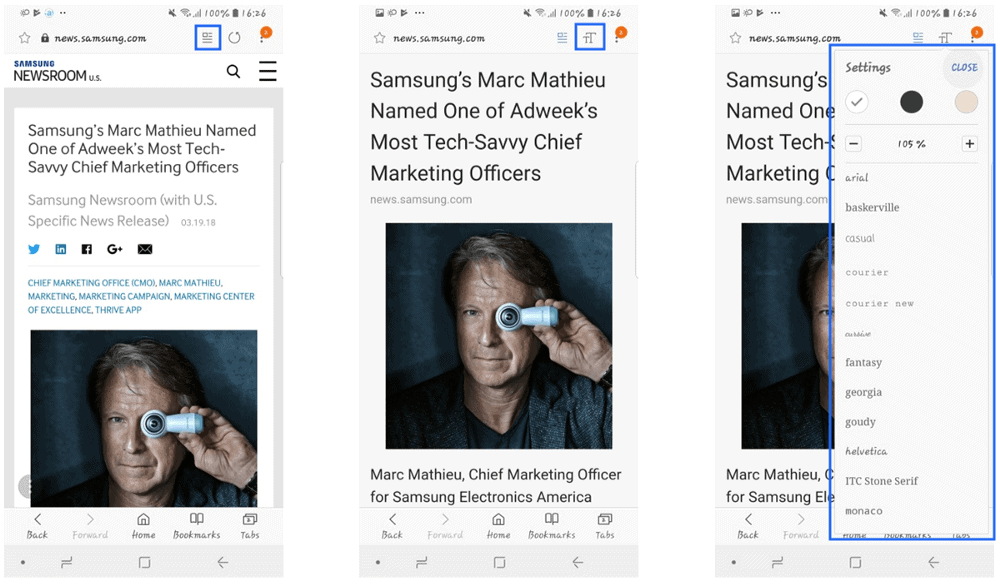 Samsung has updated its Samsung Internet browser app for Android to version 7.4, and along with that update, some changes have been made that you should know about. Changes that Samsung has pushed to this version of the app have already been available in beta for about a week at this point, and this update follows v7.2 stable update that was released a while back, so v7.2 is basically the last stable build that came before v7.4.

That being said, this update includes authentication with the Intelligent Scan, customized Reader Mode, and download history improvements… along with some US-specific changes. Now, Intelligent Scan is biometric authentication which combines iris scan and face recognition, so in order for this feature to work with Samsung Internet, your phone needs to have an iris scanner and combine it with face recognition, which essentially means this feature is more or less limited to some of Samsung's phones. As far as customized reader mode is concerned, well, that feature basically allows you to customize Samsung Internet's Reader Mode, you will be able to select your preferred background color, font, and font size once you update the app to v7.4. Download History improvements have also been made in v7.4, as you can filter your downloads by file type now, which was not possible before. You can also share downloaded files with others via the Share panel, while you're also able to delete the downloaded files and Download History entries.

As far as US-only changes are concerned, Samsung has introduced the 'Quick Suggest' feature. This is basically a personal shopping assistant which will show you relevant deals as you browser products on the web, trying to save you money. On top of that, the company also included an optional news service for US consumers, allowing you to receive push notifications for breaking news stories. That is more or less it as far as Samsung Internet v7.4 is concerned, this update is already rolling out to consumers, and you can click on the link down below to see if it's available for you, as the company is rolling the update gradually, as per usual, so it should become available to everyone within the next couple of days.