Skip to content
Advertisement
Trusted By Millions
Independent, Expert Android News You Can Trust, Since 2010
Publishing More Android Than Anyone Else
5
Today
119
This Week
191
This Month
2162
This Year
112246
All Time
Advertisement

The Razer Phone 2 had appeared on Geekbench a couple of days ago, and the device has just surfaced on AnTuTu as well. AnTuTu’s listing reveals a bit more info that Geekbench did, at least in terms of specs that we can expect. The Razer Phone 2 will, according to AnTuTu, sport a QHD (2560 x 1440) display, though the source did not say how large will that display be. In addition to that, the phone will include 8GB of RAM and 512GB of storage, while it will be fueled by the Snapdragon 845 64-bit octa-core processor. Android 8.1 Oreo will come pre-installed on the device, at least the variant that got tested runs Android 8.1 Oreo.

The device managed to score 283,397 points on AnTuTu, and that’s pretty much all the info that the source shared. Interestingly enough, it seems like the Razer Phone 2 will sport a regular 16:9 display aspect ratio, just like its predecessor, which is not that surprising considering that this is a gaming-focused smartphone. The original, first-gen Razer Phone was announced back in November last year, so its successor is also expected to arrive in the near future, quite probably also in November. The Razer Phone 2’s design did not surface just yet, so we do not really know what exactly to expect in that regard, but chances are that the device will once again sport thicker bezels than most other flagship phones out there. There’s a reason for that, though, Razer will be looking to include front-facing speakers, and to give you space to grab the phone, as this is a gaming smartphone above anything else.

The Razer Phone 2 will probably ship with some fancy cooling system, like some other gaming phones out there, while the device will probably come with a display that has a high refresh rate, as its predecessor came with a 120Hz display and wide color gamut. It remains to be seen if Razer will be able to pack in Android 9 Pie in the device before it launches, if not, Android 8.1 Oreo will have to do until Android 9 Pie arrives. The Razer Phone 2 leaks are expected to start popping up in the near future, so we’ll probably get more info about the device before it launches. 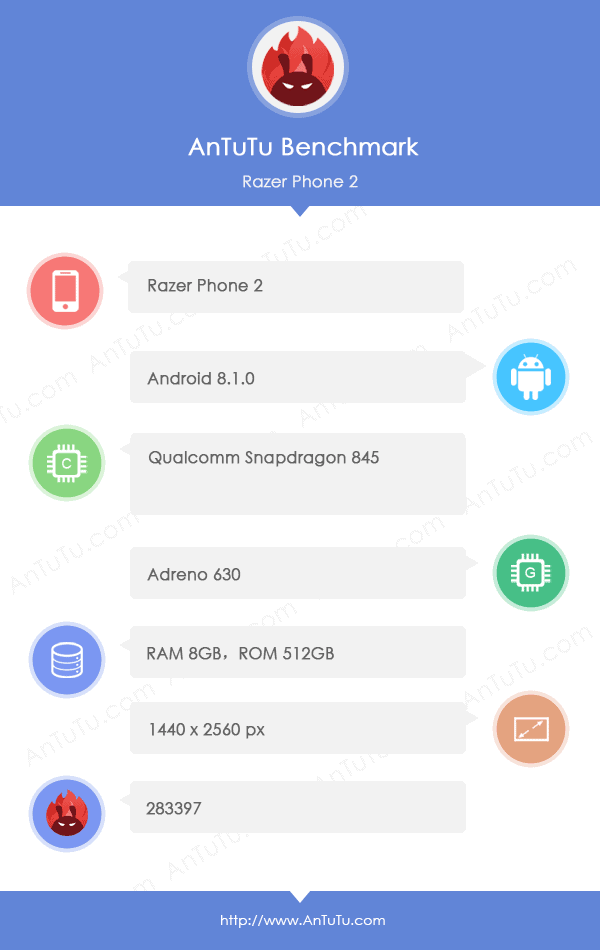