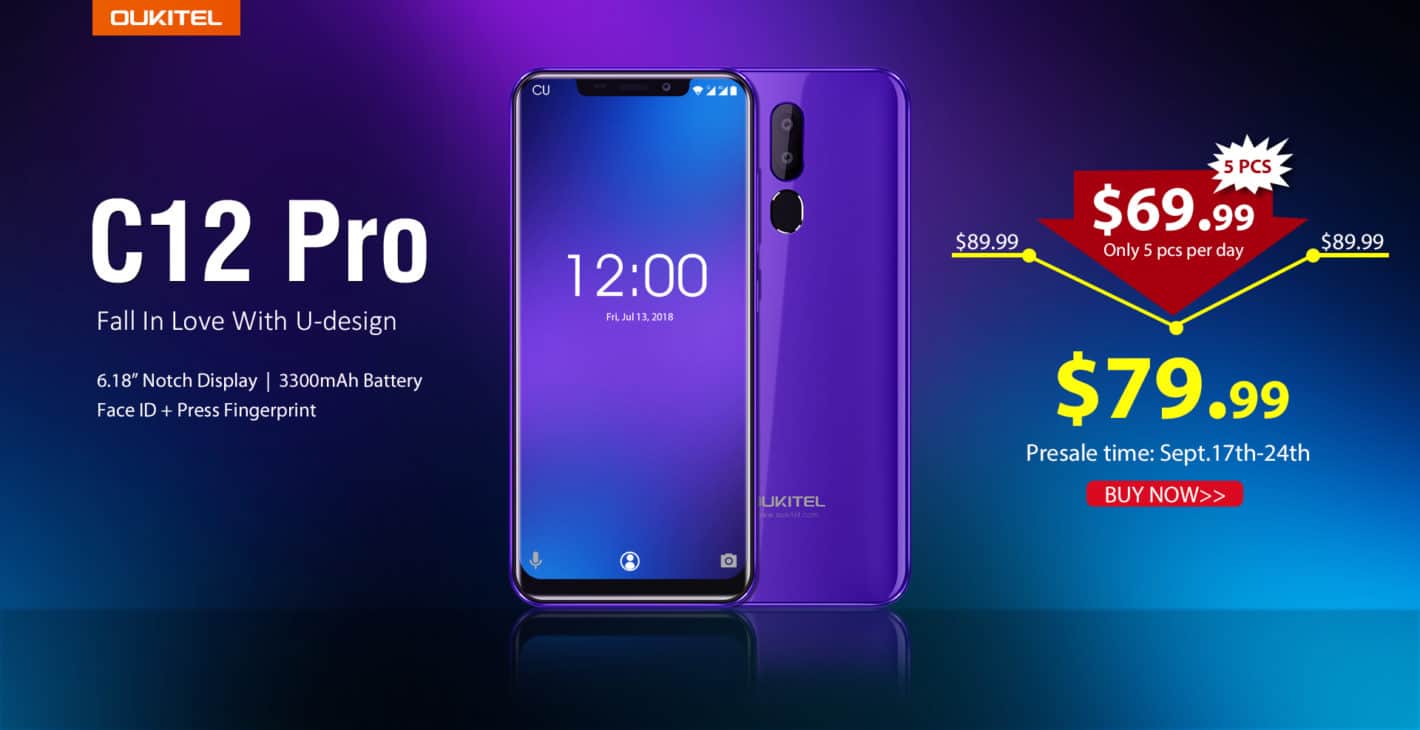 The OUKITEL C12 Pro, OUKITEL's latest budget handset, is now available for pre-order via GearBest and DX.com, the company has announced. This handset's regular price point is $89.99, but it will be priced at $79.99 during its pre-order period. That's not all, though, GearBest is giving you a chance to get the device for $69.99 from both GearBest and DX.com, though you'll need to be fast if you'd like to get it for that price point. Every day between September 17 and September 24 a limited amount (five, to be exact) of OUKITEL C12 Pro units will be available at $69.99.

The OUKITEL C12 Pro actually reminds us a lot of the OnePlus 6 when you look at the design of its back, while the phone comes with a rather wide notch at the top of its display, and a thin 'chin' below the display. The phone sports two vertically-aligned cameras on the back, with a fingerprint scanner located right below them. The OUKITEL C12 Pro's display sports rounded corners, while its back side is also curved a bit. OUKITEL's logo is located on the back of this device, while you'll find all of its physical keys on the right side. The OUKITEL C12 Pro is an entry-level smartphone, and its specifications reflect that. The phone sports a 6.18-inch display with a 19:9 display aspect ratio, and a 2.5D curved glass included on top of it.

Android 8.1 Oreo comes pre-installed on the OUKITEL C12 Pro, while the device is fueled by the MediaTek MT6739 64-bit quad-core processor. The phone includes 2GB of RAM and 16GB of expandable storage, while two SIM card slots are available on this phone. A 3,300mAh battery is also a part of the package, while you will find an 8-megapixel and 2-megapixel cameras on the back of this smartphone. A single 5-megapixel camera is included on the phone's front side, while the OUKITEL C12 Pro comes in three color variants, Black, Purple, and Champagne Gold. If you'd like to know more about the OUKITEL C12 Pro, or purchase one, links are included down below, and the company has also released a new promo video for the device, which is also included down below.