One of the departments in which the upcoming OnePlus 6T is expected to outshine its predecessor is the battery. A new leak has surfaced revealing a battery capacity of 3,700mAh for the high-end smartphone compared to the 3,300mAh battery found inside the current-gen OnePlus 6. The leak includes an image of the battery that is often not seen by the user since it is packed inside a tightly sealed glass and metal body. The specifications mentioned in the photo show a typical capacity of 3,700mAh, which is a great improvement over the currently retailing OnePlus flagship, but still falls short of the likes of the Samsung Galaxy Note 9 and the Poco F1, both of which come equipped with a 4,000mAh battery.

In addition to the capacity, the battery specs mention a limited charge voltage of 4.4Vdc and a nominal voltage of 3.85Vdc, which is exactly what was found on the OnePlus 6’s battery, indicating a similar Dash Charging system. Another aspect warranting the legitimacy of this battery is its model number BLP685, which is again in line with the naming scheme that the Chinese company has previously used. Having said that, there is no confirmation from the company in this regard, so this piece of information cannot be entirely depended upon. However, OnePlus has already confirmed the removal of the 3.5mm headphone jack and a slight increase in the 6T’s thickness, which should have vacated enough space to accommodate a larger battery. Moreover, the handset is said to sport a marginally larger display measuring 6.4 inches and an increased battery capacity becomes a must to suffice the extra pixels.

Besides featuring a larger battery, the OnePlus 6T is rumored to launch with an optical in-display fingerprint reader, doing away with the rear-placed capacitive sensor used currently. It is worth noting that a triple-camera setup seems unlikely this time and the Android smartphone will continue using two cameras, although some hardware and software improvements are expected. The DxOMark score for the unreleased phone had leaked yesterday showing off a score of 99 points against 96 points scored by the OnePlus 6. Apart from these, the follow-up device will borrow its internals from the OnePlus 6, including the Qualcomm Snapdragon 845 SoC along with up to 8GB of RAM and 256GB of internal memory. The OnePlus 6T is rumored to go official on October 16 but the company has yet to confirm any such announcement date. 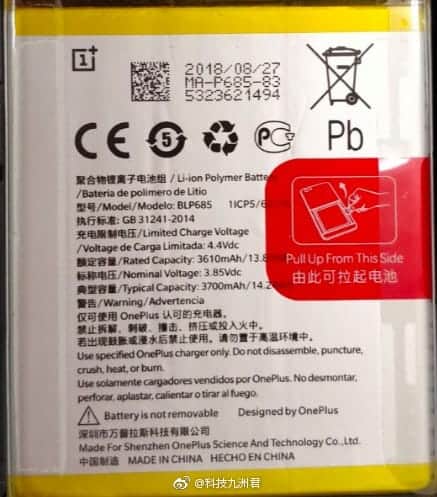