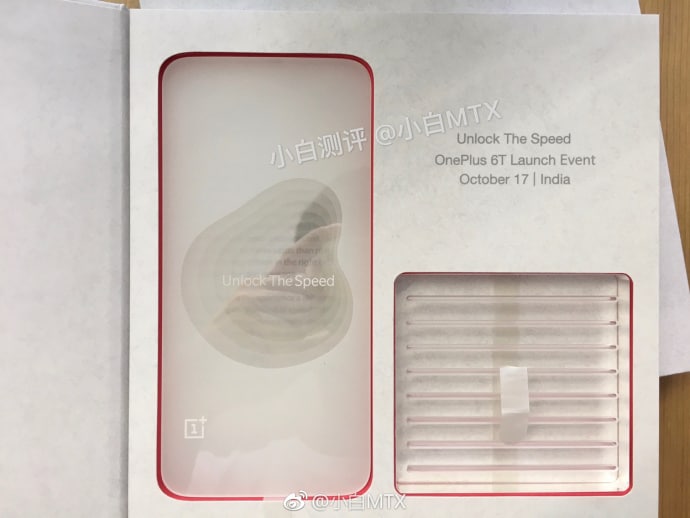 In Short: An invite for the OnePlus 6T event in India has just surfaced, and it basically confirms that the phone will launch next month. The date on this invite is October 17, and it clearly mentions the OnePlus 6T, and the company’s ‘Unlock The Speed’ tagline that will be used for the announcement. A number of reports thus far suggested that the device will be announced on October 16 on a global basis, so this October 17 event in India makes sense, as OnePlus seems to be planning to announce it to Indian consumers immediately after the global announcement takes place. This invite does not really reveal any additional info, footprint or the device is included, but there are no additional hints included here.

Background: The OnePlus 6T actually leaked yesterday, and that leaked more or less confirmed previous leaks. The OnePlus 6T will resemble the OPPO R17 quite a bit, it will ship with the same waterdrop-style notch, which will be considerably smaller than the one on the OnePlus 6. The device will be made out of metal and glass, while two vertically-aligned cameras will sit on the back of the phone. An in-display fingerprint scanner was also mentioned in a number of rumors and leaks thus far, so that may also be included. Amazon India prematurely confirmed the name of OnePlus’ upcoming flagship recently, as the company flat-out mentioned the ‘OnePlus 6T’ name while confirming that the device will land in India as an Amazon Exclusive.

Impact: The OnePlus 6T will not be a huge upgrade under the hood compared to the OnePlus 6, as it will ship with the same processor and probably same RAM and storage setups, but the device will look more appealing due to a smaller notch, while it may offer more in terms of camera performance as well. If the company opts to include an in-display fingerprint scanner in the device, that will also be something rather new and appealing to consumers, even though a regular capacitive fingerprint scanner will remain faster, at least based on in-display fingerprint scanner implementations that we’ve seen thus far. The OnePlus 6T will not sport a headphone jack, at least according to the company’s own words, so that will be a negative for some people for sure.