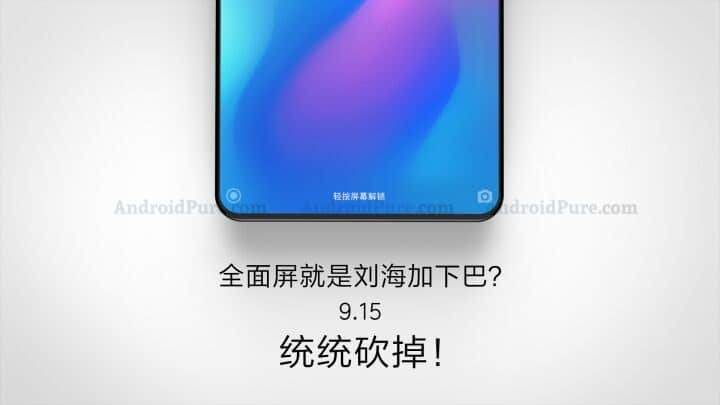 The Xiaomi Mi MIX 3 is quite probably the most anticipated Xiaomi-branded smartphone of this year, and if the leaked information is to be believed, the device will become official on September 15. This is not an official confirmation from the company, or anything of the sort, but it makes sense, as the Mi MIX 2 arrived back in September last year. Xiaomi introduced yet another Mi MIX handset this year, the Mi MIX 2S, that phone was introduced back in March.

In any case, if you take a look at the provided image, you will be able to see the bottom front part of the Mi MIX 3, provided that the info is legit. As you can see, the device does not sport a chin below the display, while its side bezels are just as thin as its chin, basically. The phone’s display will sport rounded corners, while it will sport even thinner bezels than the Mi MIX 2S if this image is to be believed, as Xiaomi probably won’t include a thick top bezel, nor a notch on the Mi MIX 3, at least the company is not expected to do that. The Xiaomi Mi MIX 3 is expected to offer a considerably higher screen-to-body ratio than the MI MIX 2 and 2S, even though those two phones sported really thin bezel. If rumors are to be believed, the Mi MIX 3 will be able to compete with the OPPO Find X as far as the screen-to-body ratio is concerned, while some rumors suggested that the Mi MIX 3 will beat the Find X in that regard even.

Earlier leaks suggested that the company will introduce several variants of the Mi MIX 3, so versions with 6GB and 8GB of RAM should become available, and various storage variants as well. Qualcomm’s Snapdragon 845 64-bit octa-core processor will fuel the Mi MIX 3, while the device will probably be made out of metal and ceramic, while a metal + glass variant may become a reality as well. The device is expected to sport at least two cameras on the back, and it remains to be seen if it will sport a rear-facing fingerprint scanner, or an in-display one. If there’s any truth to the leaked image, Xiaomi will release some official info in the near future, so stay tuned.