Most of 2018 is over by now, but we still have a couple of months left, and quite a few flagship smartphones on the way, which is something Ice Universe, a Twitter tipster, was kind enough to point out. He has listed 16 upcoming flagship-grade smartphones, and there are quite a few really interesting phones on this list, and they're listed chronologically. Most of the devices that you'll see down below come from China, with only a couple that do not.

As far as August is concerned, we do have four or five flagship-grade phones coming our way, the Meizu 16, Galaxy Note 9, Smartisan Pro 3, OPPO R17, and the 360 N7 Pro. The most notable name here is the Galaxy Note 9, no doubt, and Samsung had already scheduled a press conference for this handset, it will arrive on August 9. Meizu has done the same for the Meizu 16, as the device is expected to become official on August 8, and become the first 'bezel-less' handset from the company. The Smartisan Pro 3 and 360 N7 Pro we don't know much about, but the OPPO R17 did leak a couple of times thus far, and it will look similar to the OnePlus 6, but it will sport a smaller notch which will come with a different shape / design, and thinner bezels will also be included.

The LG V40 ThinQ, Google Pixel 3 (XL), 2018 iPhones, and the Mi MIX 3 are listed for September, and they'll probably all drop in September, though nothing has been confirmed just yet. The LG V40 ThinQ will probably resemble the LG G7 ThinQ, while the Pixel 3 won't sport a display notch, unlike its Pixel 3 XL sibling, but its bezels will be a bit thicker than the bezels on the Pixel 3 XL. iPhones are really not something we focus on, but it seems like three models are coming, while the Mi MIX 3 may become a smartphone with the highest screen-to-body ratio out there, or at least come close to the OPPO Find X in that regard. Latest info claims that the Mi MIX 3 will arrive on September 15, but nothing has been made official yet.

The Nubia Z19 and the Mate 20 are expected to drop in October. The Nubia Z19 will have a really high screen-to-body ratio, though we did not see many rumors / leaks when it comes to that phone, while the Mate 20 will arrive in at least three variants, Mate 20, Mate 20 Pro, and Mate 20 Lite, similar to last year's models. The Mate 20 handsets will debut Huawei's all-new flagship SoC, the Kirin 980, which is expected to arrive before the end of this month. The OnePlus 6T and Honor V11 will likely arrive in November, and while we don't have much info when it comes to the Honor V11, the OnePlus 6T will probably resemble the OPPO R17 which leaked recently. That means that it will have a smaller notch, which will sport a different shape, thinner bezels, and maybe even an in-display fingerprint scanner, but it remains to be seen.

The 360 N8, Honor Magic 2, and Vivo X22 handsets will probably launch in December, though we don't really have all that much info when it comes to either of those smartphones at this point. The Vivo X22 may resemble the OPPO R17, but we're only guessing. As you can see, we're up for an exciting end of 2018, as quite a few phones are left to be announced. 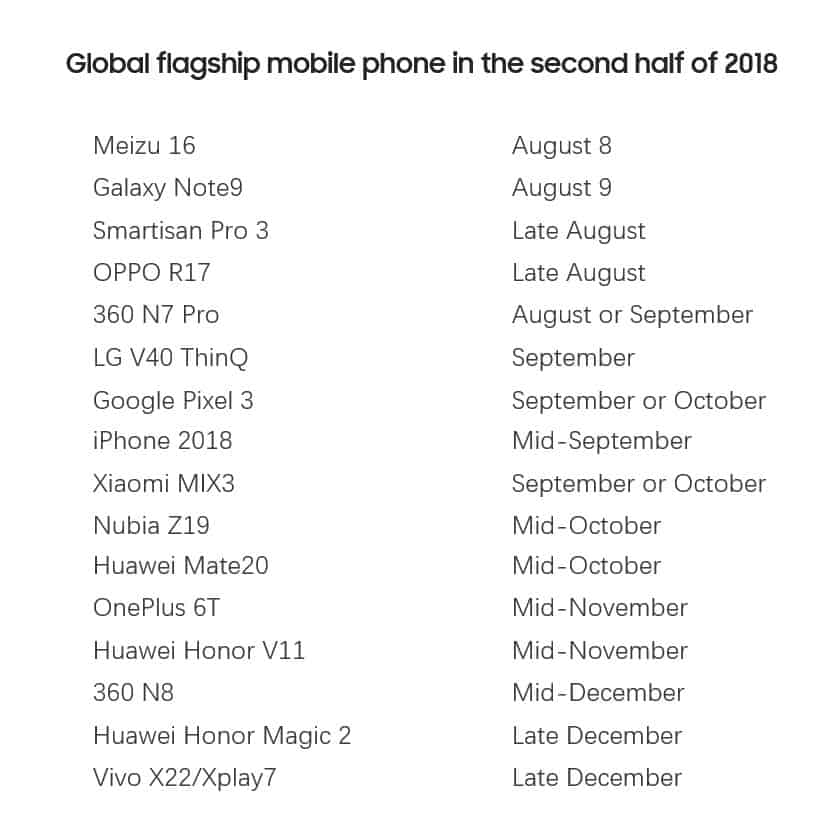