A Sony-branded handset speculated to be the company’s as-yet-unannounced Xperia XZ3 flagship has now reportedly cropped up at Brazil’s ANATEL technology certification agency in the leadup to its expected reveal at IFA Berlin 2018. There isn’t too much information available from the new listing but the Brazillian agency’s site does list the handset with model numbers ‘H-9461’ and ‘H-9463’ for the certification. Meanwhile, the battery capacity associated with the model numbers is set at 3,060mAh. That has been posited to point to variations on the Xperia XZ3, which wouldn’t necessarily be impossible. The company has had a relatively long tradition of unveiling multiple configurations of its flagship hardware ranging from standard to compact versions. However, the listing could easily point to something else entirely since the details are so slim with ANATEL’s listing.

The abovementioned event is scheduled to run from August 31 to September 5, so the timing makes sense with regard to certification for sales in the regions served by ANATEL. However, there are some at least a couple of key differences between this device and previous leaks pertaining to the Sony Xperia XZ3. First, model numbers can and do vary from region to region and could point to slight variations in specs for alternate configurations. With that said, the number associated with prior rumors has typically been ‘H8416,’ which differs substantially from those listed at ANATEL. Beyond the designations provided, the battery size indicated on the documentation also doesn’t seem to line up with current expectations. Previous leaks have suggested Sony will opt for a 3,240mAh unit in its flagship.

Setting the newly sighted certification aside, the Sony Xperia XZ3 will reportedly feature an octa-core Snapdragon 845 SoC backed by 6GB of RAM and 128GB storage. That’s expected to be packed in behind a 5.7-inch or 5.9-inch fullHD+ panel at an 18:9 ratio in an all metal frame rated at IP68 for water and dust resistance. Android 8.1 is expected out of the box. Speculation about the cameras, on the other hand, are effectively a wash. Some reports have pointed to a dual camera setup at 19-megapixels and 12-megapixels, while others have suggested it will ship with two cameras both front and back. More recently, rumors seem to suggest the XZ3 will sport a massive single sensor set at as much as 48-megapixels. 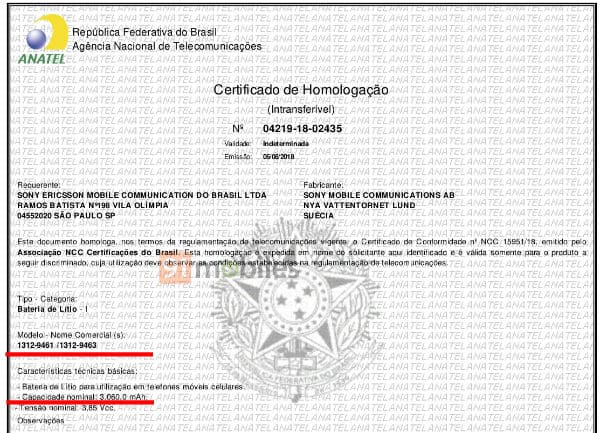